Death toll from ‘ISIS’ gun attack in Afghan maternity ward where newborns, nurses and mothers were slaughtered rises to 24

The death toll from a gun attack at a hospital in Afghanistan where newborns, nurses and mothers were slaughtered, rose to 24 today.

The health ministry said today the dead included two newborn babies, along with mothers and nurses, after the three gunmen dressed as police officers stormed the maternity hospital in the Afghan capital of Kabul.

Deputy Health Minister Waheed Majroh said at least 24 people were killed in the attack and another 16 wounded. Authorities had earlier put the death toll at 14.

No group has so far claimed the attack, but President Ashraf Ghani blamed both the Taliban and the Islamic State group but singled out the former and ordered the military to switch tactics from ‘defensive to offensive’ when dealing with the insurgents.

he Taliban has responded by warning it is ‘fully prepared’ to counter Afghan forces. 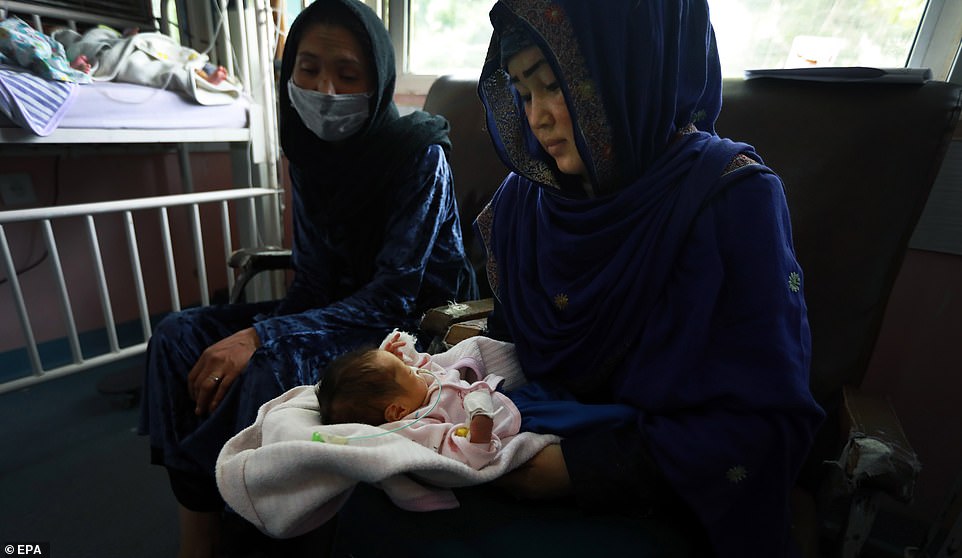 A rescued mother and her newborn baby take medical care today in a hospital a day after the maternity ward attack at MSF (Doctors without Borders) hospital, in Kabul, Afghanistan 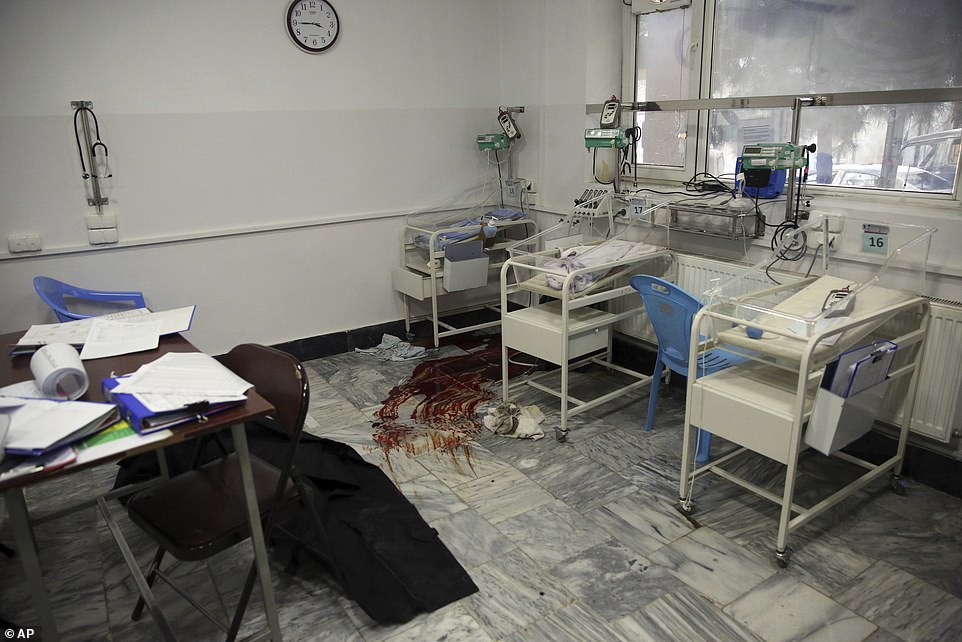 After opening fire on civilians, the gunmen then got into a shootout with security forces which ended several hours later when all three were shot dead (pictured, the scene inside one of the wards yesterday) 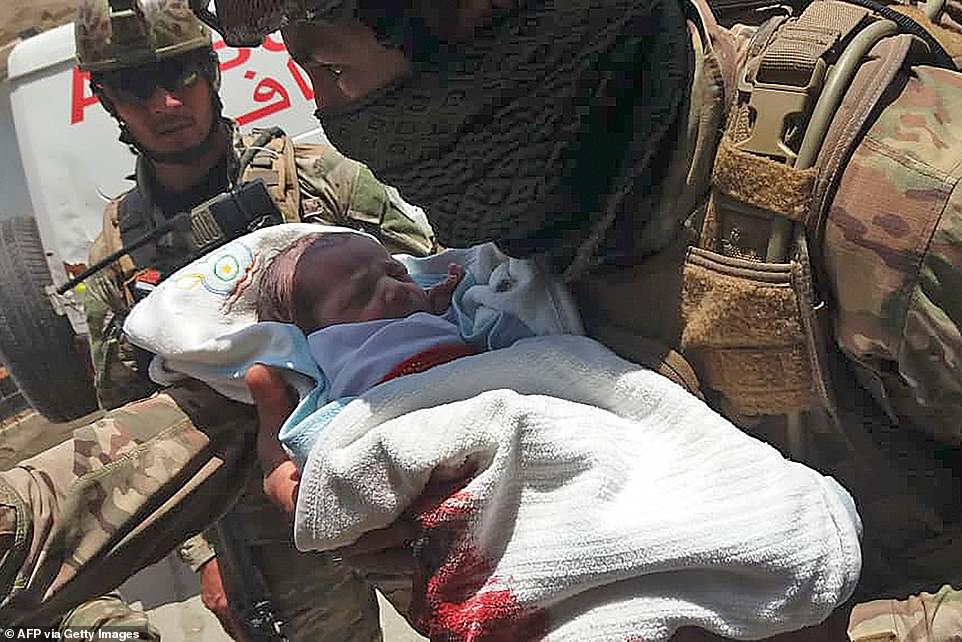 Afghanistan is suffering near-daily attacks during the holy month of Ramadan while threatens to derail fragile peace talks between the Taliban, the government, and US forces (pictured, a baby wrapped in a bloody towel is evacuated) 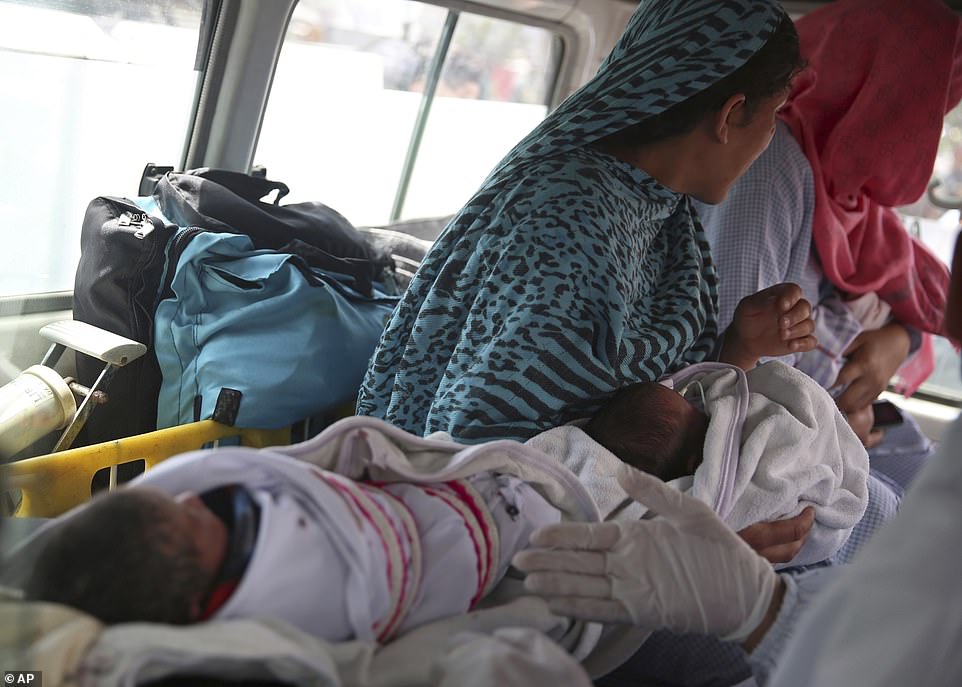 24 others were also injured in the attack while another 100 were evacuated after gunmen dressed as police officers walked into the hospital, threw grenades and opened fire at the maternity hospital in Kabul yesterday

The attackers were eventually killed in a lengthy clearance operation during which heavily armed Afghan security forces carried babies from the scene – at least one wrapped in a blood-soaked blanket.

On Wednesday, The families of about 15 babies whose mothers were killed are awaiting news on what will happen to the children, according to the New York Times.

Ghani also blamed the two groups for a suicide bombing in the country’s east after an attacker blew himself up in the middle of a funeral ceremony for a police commander in Nangarhar province.

Provincial health ministry spokesman Zaher Adel said 32 people were killed in the bomb attack and another 132 wounded. Officials had earlier said 24 mourners were killed. IS claimed the blast.

ISIS claimed another series of attacks in the Afghan capital on Monday and are suspected of being behind the attack at the maternity ward. They are yet to claim the slaughter.

The Taliban, which is due to enter into peace talks soon having signed an agreement with US forces in February, has denied involvement. 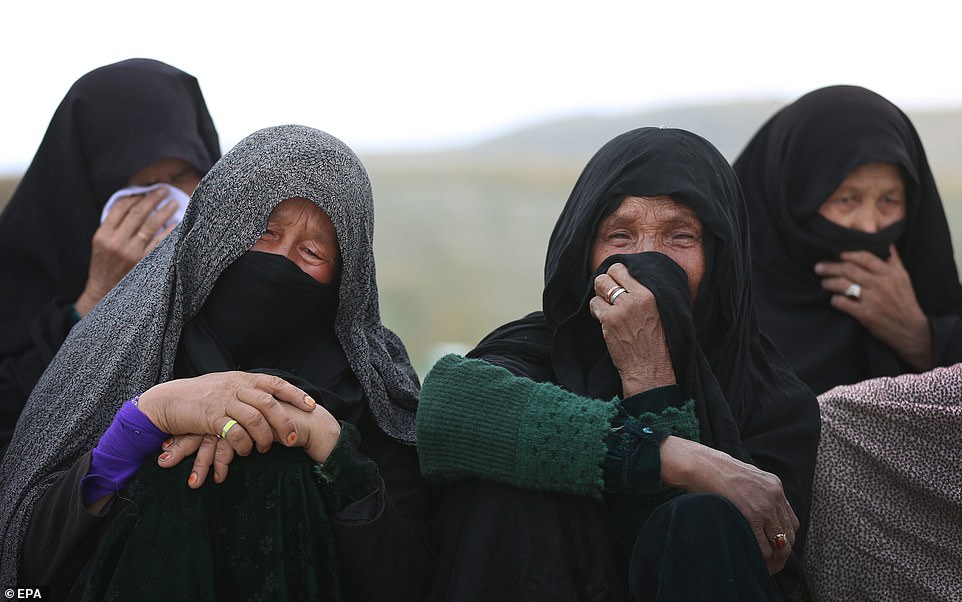 Relatives of a deceased pregnant woman attend her burial ceremony, a day after an attack at an MSF (Medecins Sans Frontieres) hospital, in Kabul, Afghanistan yesterday. According to reports, at least 15 people were killed and 16 others injured including women and newborn babies 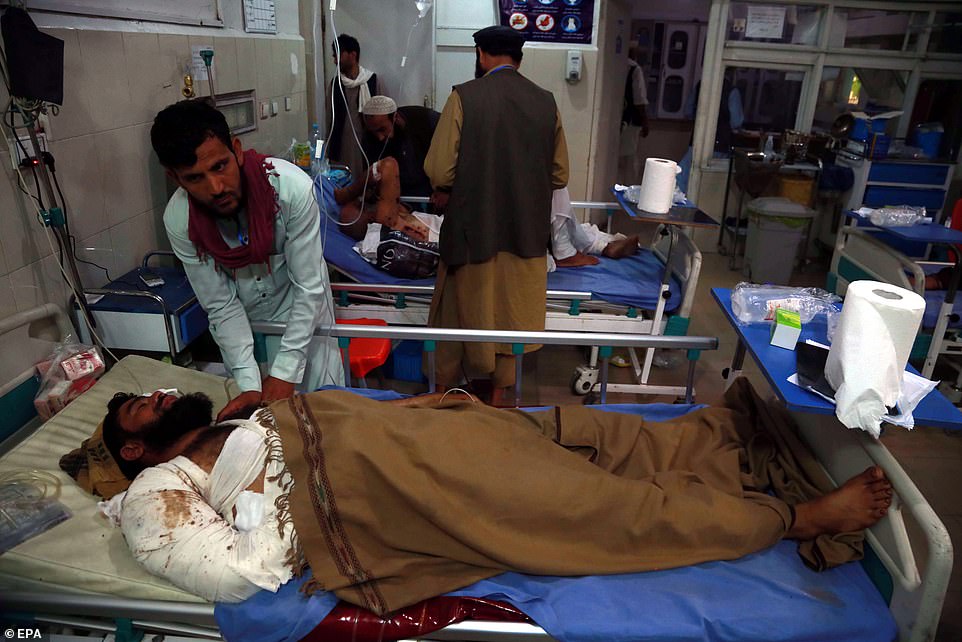 People who were injured in a suicide bomb attack at a funeral in Khewa district, hours after the gunmen stormed the maternity ward in Kabul, are seen receiving medical treatment today at a hospital in Jalalabad, Afghanistan 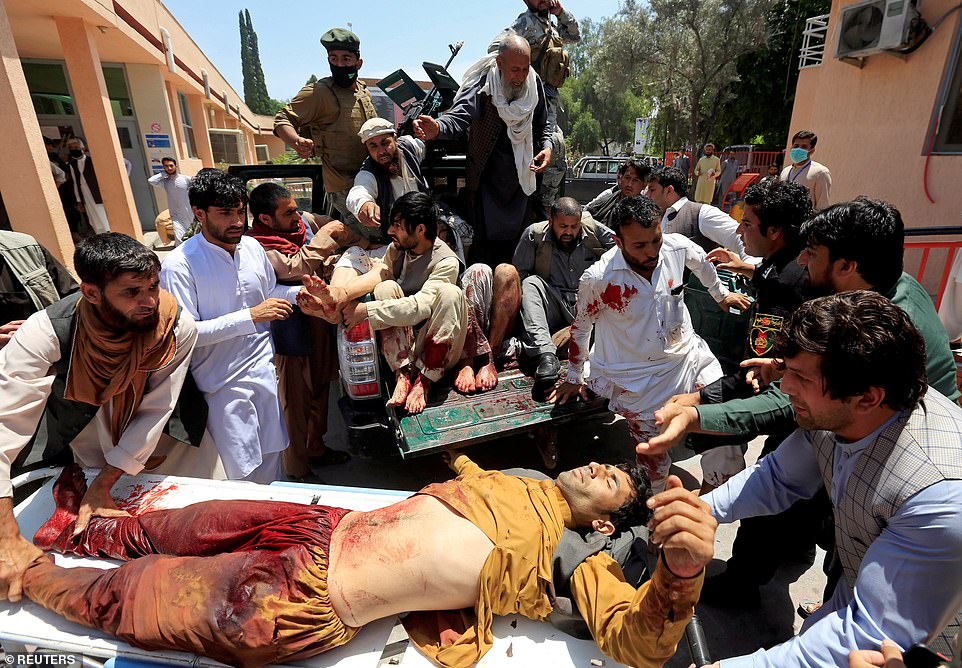 Injured persons are carried from a car to a hospital after a suicide bomb attack during a funeral ceremony in Jalalabad, Afghanistan yesterday. ISIS have claimed responsibility for the blast

A third attack then struck Khost province after a bomb planted under a cart in a market killed a child and wounded 10 more. No group claimed responsibility.

However, ISIS did lay claim to a series of attacks across Kabul on Monday which wounded four civilians, including a child.

The near-daily attacks in Afghanistan are threatening to undermine a peace process which was due to begin after the US and Taliban signed a deal to end America’s longest-running conflict in February.

The attacks have also left Afghan authorities ill-prepared to face the onset of the coronavirus pandemic.

More than 4,900 cases of the virus have been detected in Afghanistan so far, while at least 127 have died from it. 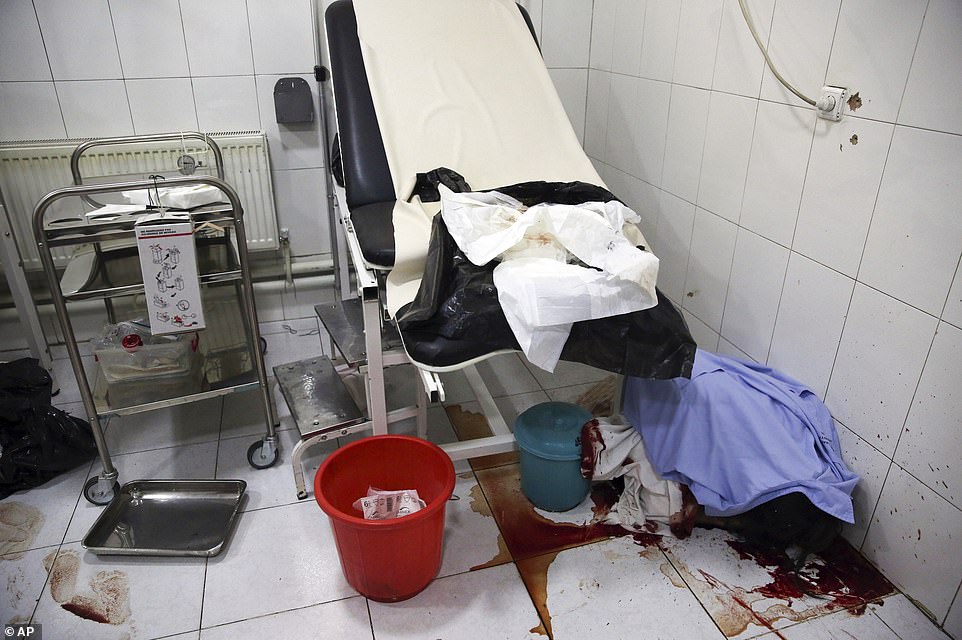 The Afghan and Pakistani governments condemned the attack in Kabul as a ‘crime against humanity’ (pictured, blood stains inside one of the wards yesterday ) 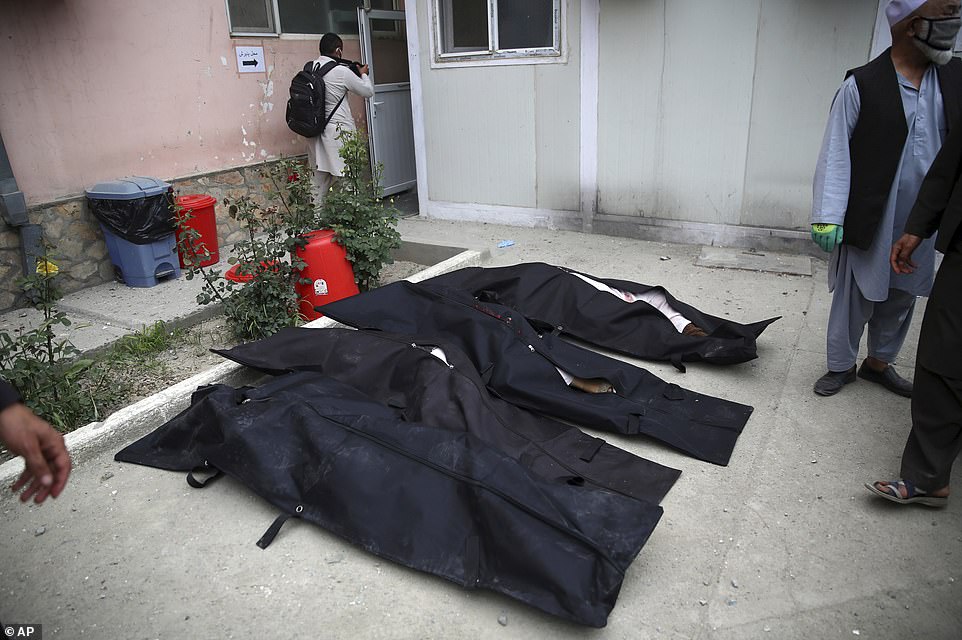 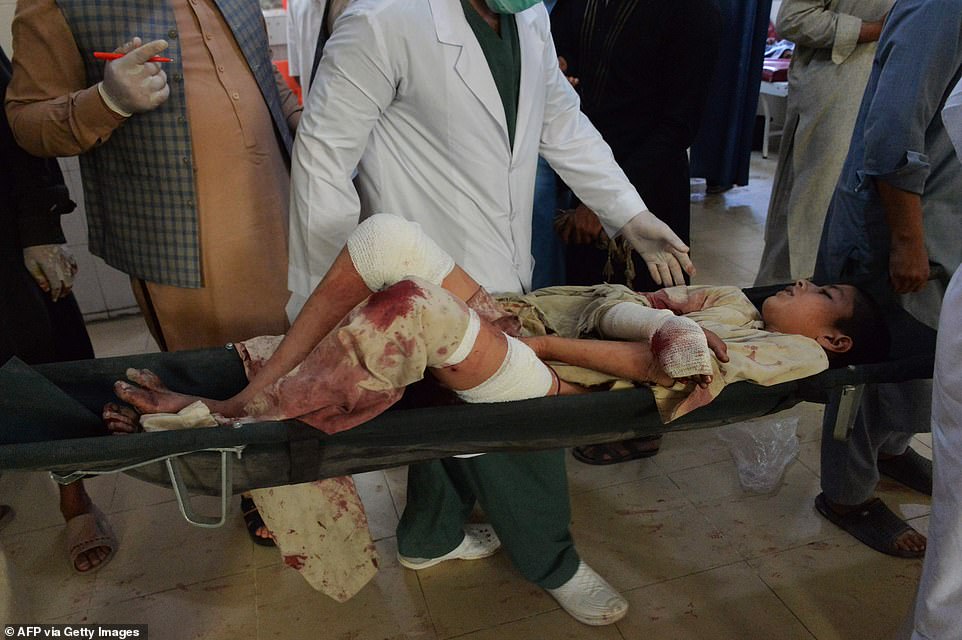 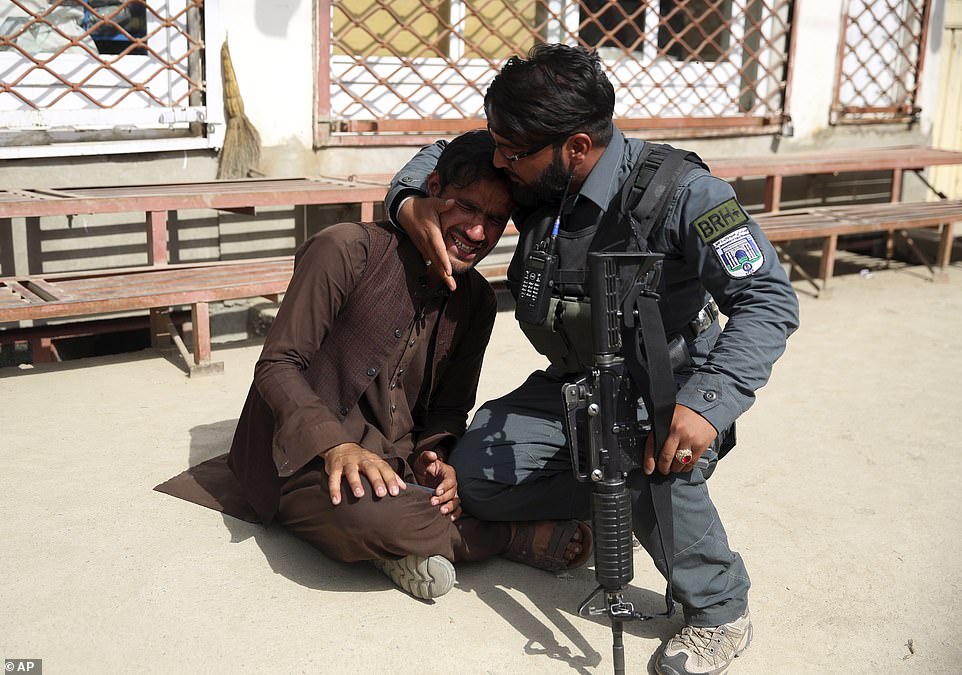 ISIS, which carried out four bomb attacks in Kabul on Monday, is thought to be behind the latest assault after the Taliban – which is due to enter into peace talks soon – denied involvement (pictured, a soldier comforts a grieving man yesterday)

Speaking about the hospital attack, Interior Ministry spokesman Tareq Arian said over 100 women and babies were evacuated before it was over.

Three foreign nationals were among those safely evacuated, he said, without elaborating.

It was unclear why the maternity hospital in Dashti Barchi, a 100-bed facility, was targeted – an attack Arian said was an ‘act against humanity and a war crime.’

Photos shared by the Interior Ministry during the Kabul attack show newborn babies and their mothers being carried out of the hospital by Afghan security forces.

Once the gunmen were dead, husbands, fathers and family members of patients gathered outside, desperate for news of their loved ones.

A man read out the names of those who had been evacuated to other hospitals. 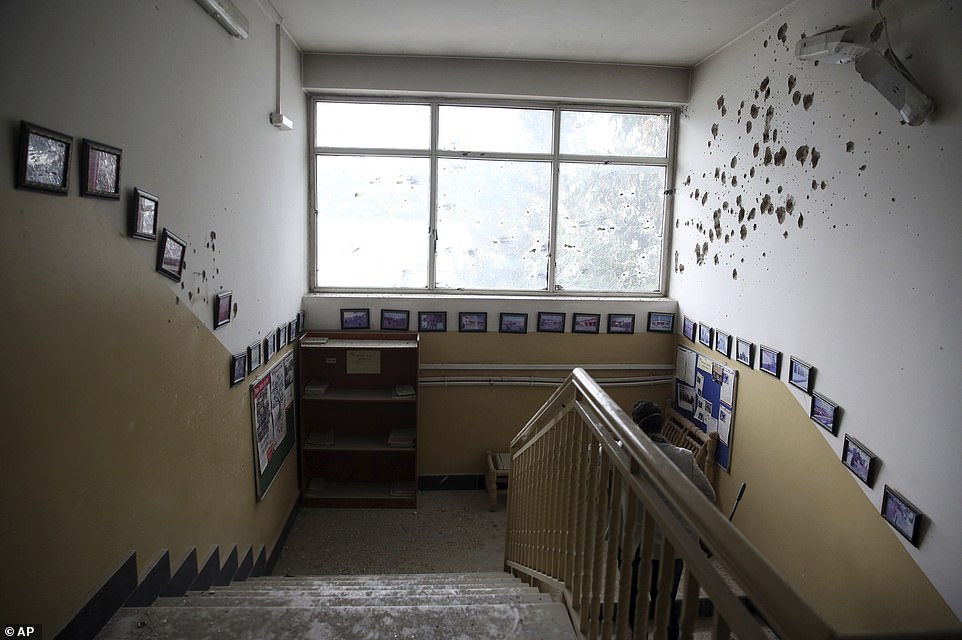 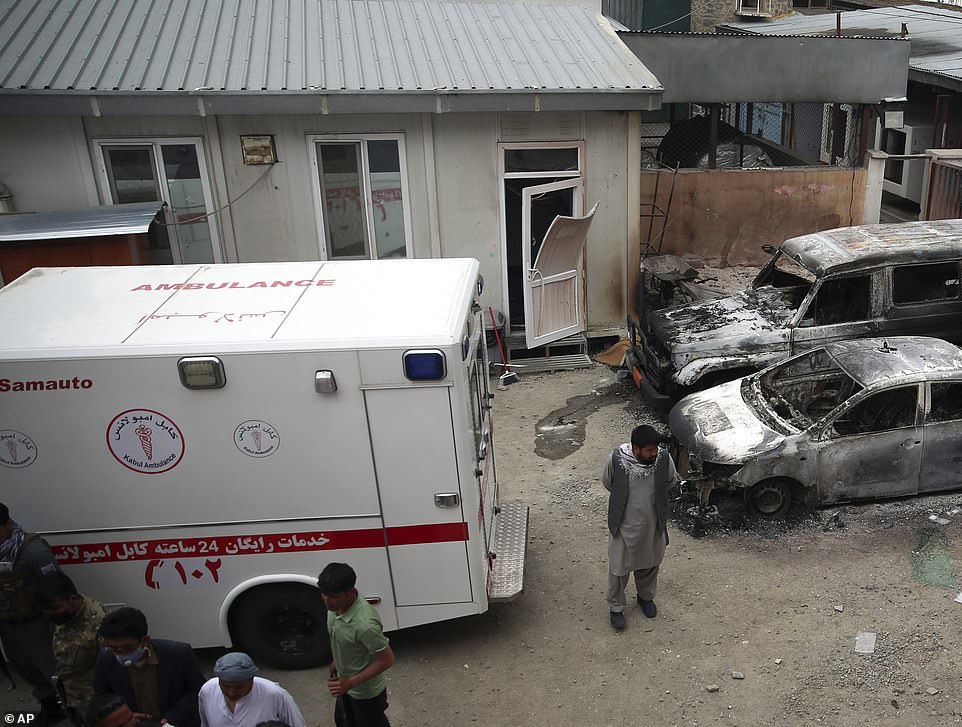 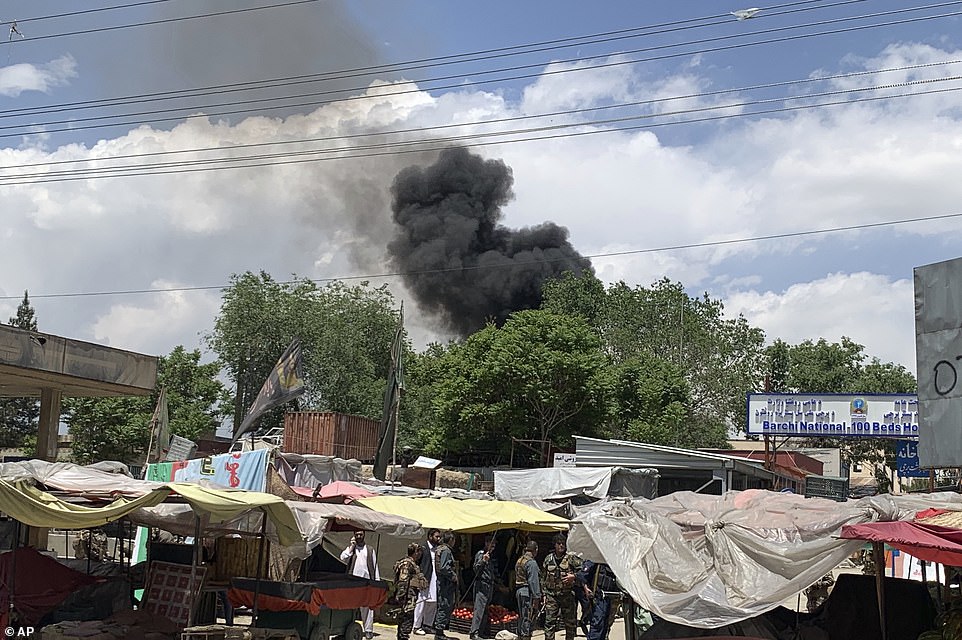 Smokes rises from a hospital after a gunmen attacked in Kabul, Afghanistan, around 10am Tuesday 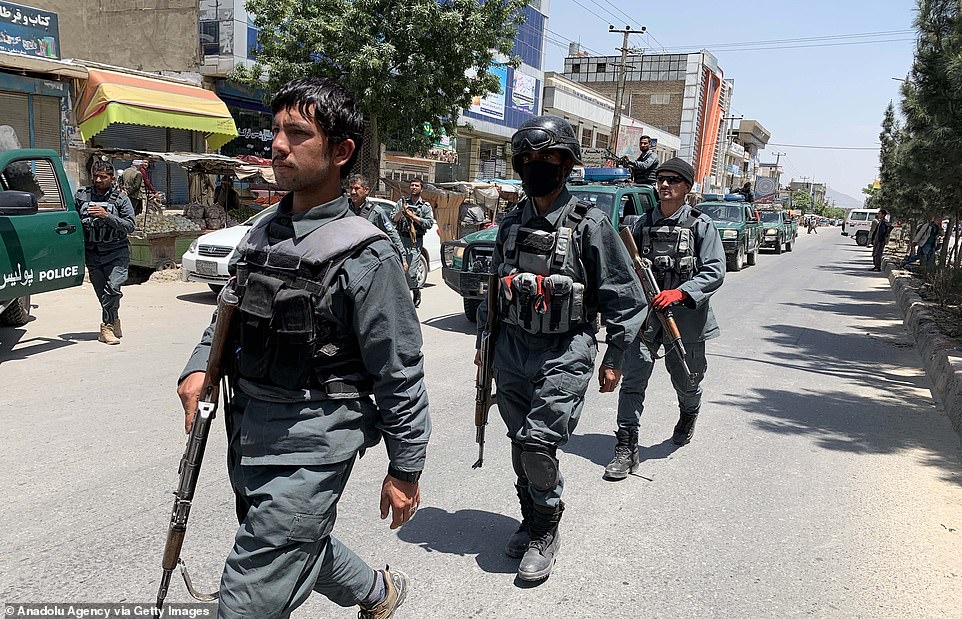 Two more attacks elsewhere in Afghanistan on Monday targeted a market and a funeral procession, killing at least 25 others 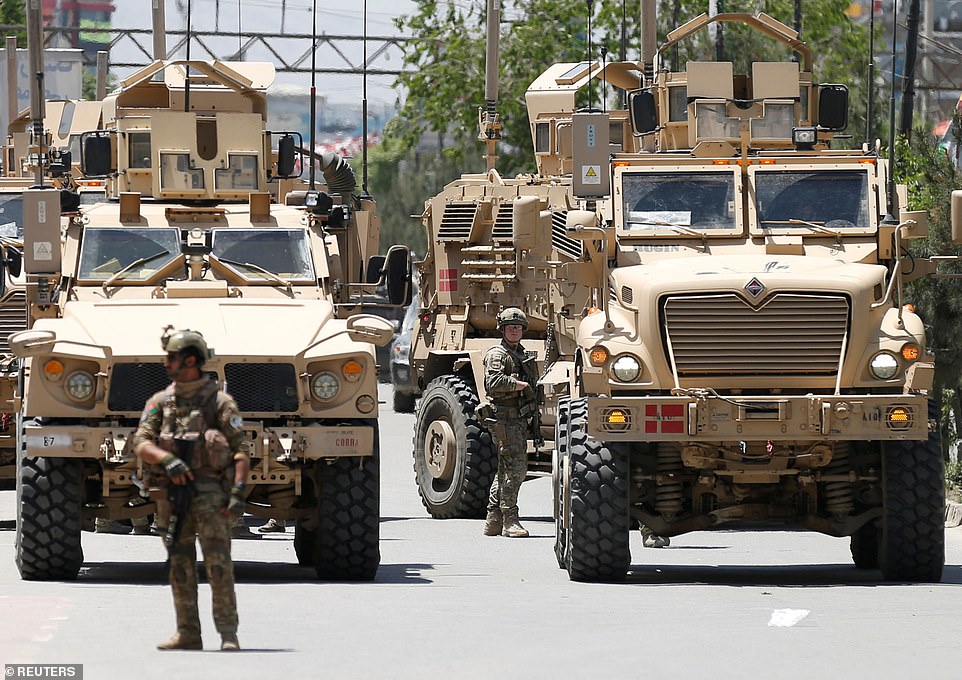 A foreign soldier keeps watch among armoured vehicles outside a hospital which came under attack in Kabul, Afghanistan

The foreign ministry said both the Kabul hospital attack and the one on the funeral ‘are particularly despicable as they take place in the holy month of Ramadan and at a time when Afghanistan is grappling with the COVID-19 pandemic.’

In the Nangarhar attack, the funeral was being held for a local pro-government militia commander and former warlord who had died of a heart attack on Monday.

A government spokesman added that the dead included Abdullah Lala Jan, a provincial council member, while his father Noor Agha, a lawmaker, was wounded.

EastEnders' Steve McFadden fined after being caught speeding on his moped