Victoria has recorded 996 new coronavirus cases and nine deaths as protesters continue to voice their anger over controversial proposed pandemic laws and the state gets set for restrictions to relax further in the coming days.

The latest figures take the total number of active COVID-19 cases in Victoria to 14,260. 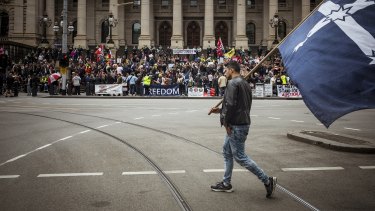 Protesters remained on the steps of State Parliament late into the evening again on Tuesday. Credit:Chris Hopkins

There are 357 people in hospital with the virus in the state. Of those, 123 patients are in intensive care, with 35 on a ventilator.

Sixty-five people in ICU have been cleared of the virus.

Another 72,010 COVID-19 tests were processed across Victoria on Tuesday, while 6692 people rolled up their sleeves for a coronavirus vaccine at a state-run hub.

Of Victoria’s population aged over 12, 87 per cent are now fully vaccinated.

The government announced late on Monday that it would amend the bill, which has attracted strong criticism from lawyers and human rights activists for overreach.

However, the amendments did not satisfy the civil society opponents, nor quell the anger of protesters; some of whom have vowed to keep rallying outside State Parliament until it is dumped altogether.

Demonstrators sat on the steps of the Victorian parliament on Spring St late into the evening again on Tuesday, holding signs, waving flags, chanting “kill the bill”, and cheering at passing cars that beeped their horns.

Some camped out on the State Parliament steps for a third night on Tuesday, although noticeably fewer compared with those who stayed overnight on Monday. A couple of dozen people remained on the steps just before 6am on Wednesday.

In a rare move, the state government declared the pandemic legislation “urgent” without the support of the opposition on Tuesday in a bid to bring on the debate after agreeing to the last-minute amendments.

Debate continued into the night in Victoria’s Parliament on Tuesday and is then slated to continue on Thursday and perhaps spill into Friday. MPs in both houses could be hauled back into Parliament for an extra sitting day to ensure the bill’s passage with amendments.

The legislation is intended to replace the state of emergency legislation that has given the government power to enforce health orders.

The emergency laws expire in December, and the new bill is intended to allow the government to keep enforcing policies, such as isolation requirements, while also being available for any future pandemic.

With the state approaching its 90 per cent vaccination target, Premier Daniel Andrews flagged on Tuesday he would make an announcement this week about when restrictions could ease further across the state.

“We’ll be able to have a chat about when we’ll move from these settings to the new settings,” he said.

“Just to remind people, that means we go down to masks in very sensitive settings only, so things like public transport, hospitals … aged care, things of that nature.

“And also, density quotients go and other caps go, other than for … the 10 very biggest venues in the state.”

The Premier said he could make the announcement on Thursday, Friday, or Saturday. “It will be when I’m ready to make that announcement,” he said.

Mr Andrews said authorities needed to be clear on when Victoria would hit the 90 per cent double-dosed target.

The Victorian government has announced the location of five new youth prevention and recovery care units for young people struggling with their mental health.

The facilities, dubbed Y-PARCS, will be located at Ballarat, Geelong, Shepparton, Heidelberg and Shepparton.

They will offer mental health support in a home-style environment for about 900 young people who are either stepping up from community care or down from a hospital setting.

The facilities offer a maximum stay of up to 28 days for those aged between 16 and 25, and focus on personalised and preventative care.

Three centres are already operating in Victoria at Bendigo, Frankston, and Dandenong.

With Paul Sakkal and Rachel Eddie