This is the shocking moment a dirt bike rider suffers concussion after a buck leaps into him during a race in Texas.

Wesley Gustine, 27, was taking part in the Texas State Championship Enduro Circuit in Columbus in November.

He was overtaking his friend Justin Bird, also 27, who had a GoPro recording the 40-mile circuit. 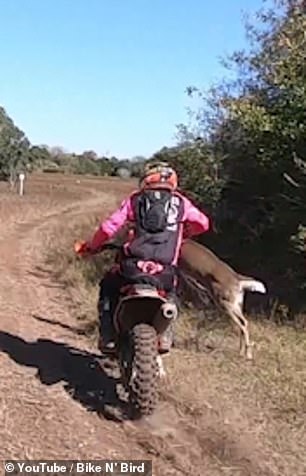 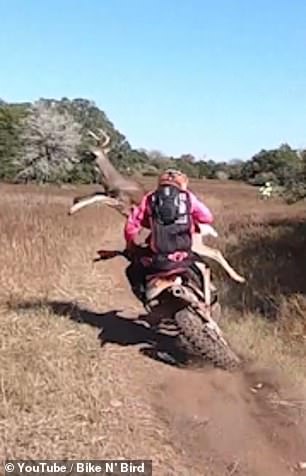 Wesley Gustine, 27, was taking part in the Texas State Championship Enduro Circuit in Columbus in November when a buck ran on to the track

But as Wesley sped past, out of nowhere a buck runs from the bushes and attempts to jump over the track.

Instead the animal leaps straight into Wesley, knocking him off his bike and sending him hurtling into the long grass, Justin’s footage shows.

Justin said: ‘I was in complete shock. What you see in the video is not what I saw in real time. 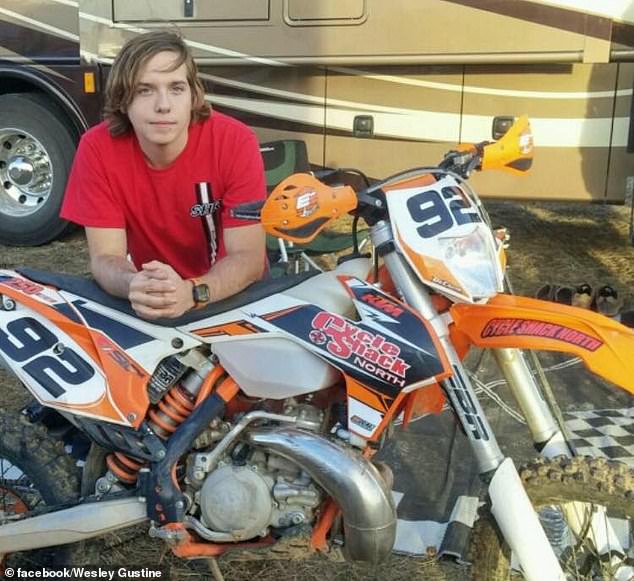 ‘Essentially all I saw was a brown streak out of the right of my eye just after Wesley had passed me and before I knew it, he had a deer in his chest and he was on the ground.’

Other riders stopped to check Wesley’s state and he then had a concussion test.

He suffered minor concussion, whiplash and scrapes and bruises and his bike’s brake lever was bent into the throttle.

Justin said: ‘He jumped up so quick I knew he couldn’t be hurt too bad so my thoughts went straight to “I can’t believe I caught that on camera”. 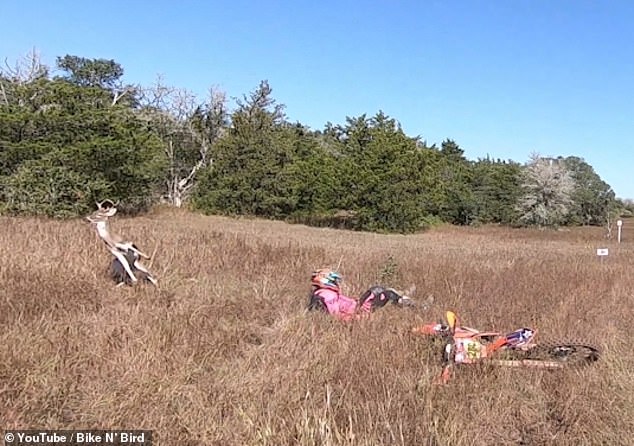 ‘I think the adrenaline kept Wesley from hurting too much that day. Every time I saw him throughout the day at pit stops, section starts, etc., he was smiling and laughing with the other riders.’

Wesley received a Did Not Finish for the race after hitting the buck which are often seen in Texas at that time of year.

They are more dangerous during rutting season between October and December and accidents are common.

Justin said of the buck: ‘My guess is this guy was sleeping somewhere and another rider at another part of the course spooked him and caused him to take off like he did.’

Justin has only recently taken up dirt bike riding again after a horror crash aged 16 forced him to stop, and this was his first race back on the saddle.

Has Australian TV found an answer to Scandi noir?

What time is Famous and Fighting Crime on Channel 4 TONIGHT and who's in the line-up?