Demand for trains plummets after timetables were slashed: Rail travel is 55% of pre-pandemic levels after Omicron wave saw firms axe services to cope with staff shortages

Demand for trains has plummeted after timetables were slashed with rail travel at 55 per cent of pre-pandemic levels after Omicron saw firms axe services to cope with staff shortages.

The number of train journeys made on Monday was just 55 per cent of the normal total, according to provisional Department of Transport figures.

That was up 38 per cent on Tuesday, January 4, the first working day of the previous week in England and Wales.

It comes as rail companies across Britain have warned passengers that they face reduced services ‘until further notice’ amid rail replacement buses, halved service frequencies and a ‘Sunday-style timetable’ on some routes.

Train firms have slashed hundreds of services due to thousands of Covid-related staff absences, with bosses warning passengers to expect last-minute cancellations and more crowded trains due to fewer in operation.

Staff absence for all reasons is now at 11 per cent across all operators, according to the latest Rail Delivery Group data in the week to January 5 – a sharp rise from 8.9 per cent up to December 29 and 8.7 per cent to December 22.

The ever-rising figure is also significantly up on 7.6 per cent in November 2021 and 4.5 per cent at the end of August 2020, during the period when Covid-19 rates in the UK were at their lowest during the pandemic. 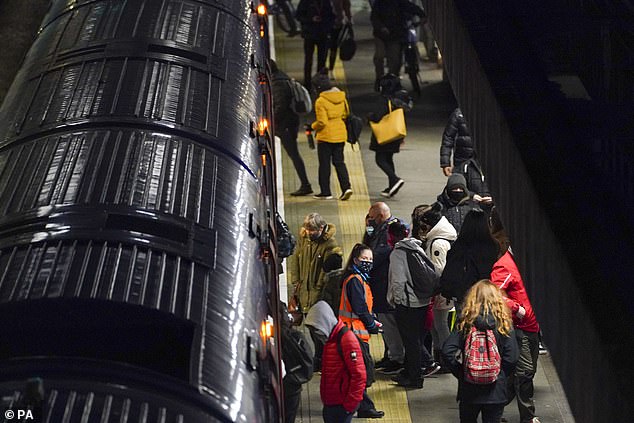 Commuters wait to catch a London bound train in Bracknell, Berkshire, on Monday – when the number of rail journeys was just 55 per cent of the normal total 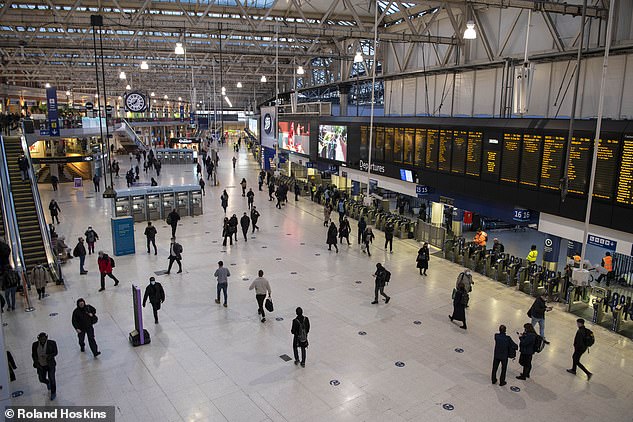 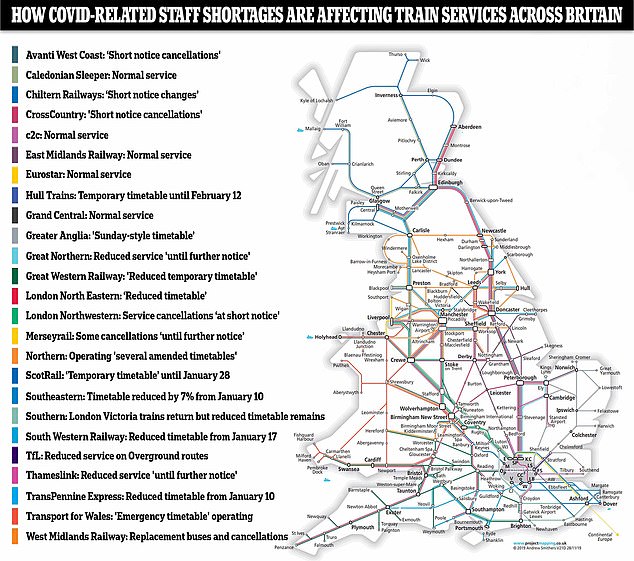 This Transport for London graph shows passenger data split by station type, dating back to the start of 2020

Train companies said the amended timetables had been brought in because of high staff absence numbers but also lower demand since the Government’s working from home guidance was brought back in last month.

Passenger numbers exceeded 70 per cent of pre-pandemic levels prior to Covid fears again taking hold amid the rapid spread of Omicron across the UK in late November.

The variant led to work from home guidance being introduced, causing a significant drop in the number of commuters travelling by train into offices across Britain.

It comes as Prime Minister Boris Johnson hailed ‘great progress’ against Omicron earlier this week and said the Government is ‘looking at’ cutting the self-isolation period – but warned that the NHS is still under significant pressure.

There are currently mounting calls to reduce the mandatory quarantine period from seven days to five as fears mount over the impact of more than a million people being forced into isolation.

Ministers have already cut isolation times from 10 days to seven for those who can provide negative tests on two consecutive days, but Downing Street has so far refused to follow the lead of France and the US in reducing the period by a further two days.

How Covid-related staff shortages are affecting train services across UK

Belgravia viewers in tears after grandson is revealed to be legitimate

Homeowner slams council over plan for public footpath through garden