Washington: House Democrats unveiled a sweeping package of changes on Wednesday morning designed to strengthen Congress's ability to check the executive branch and prevent abuses of power, especially by the president.

The package, which its architects have informally referred to as "post-Trump reforms," includes measures to restrain the president's power to grant pardons and declare national emergencies, to prevent federal officials from enriching themselves and to accelerate the process of enforcing congressional subpoenas in court. 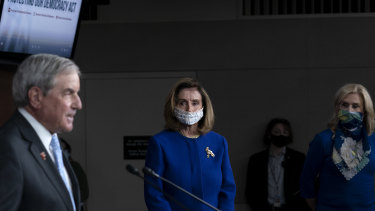 It also includes provisions to protect inspectors general and whistleblowers, increase penalties for officials who subvert congressional appropriations or engage in overt political activity and safeguard against foreign election interference.

The proposals were introduced at a news conference on Capitol Hill Wednesday morning, local time.

Taken together, the measures represent the Democrats' attempt to correct what they have identified as systematic deficiencies during the course of President Donald Trump's tenure and impeachment, in the style of changes Congress adopted after Richard Nixon left office.

Unlike the post-Watergate reforms, however, which took years to enact, today's House Democrats have collected their proposed changes under one bill reflecting several measures that have been percolating piecemeal through the House. 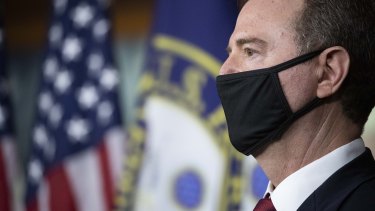 In a joint statement, seven committee chairs signalled their legislation is intended to "prevent future presidential abuses, restore our checks and balances, strengthen accountability and transparency, and protect our elections."

"It is time for Congress to strengthen the bedrock of our democracy and ensure our laws are strong enough to withstand a lawless president," the statement says.

"These reforms are necessary not only because of the abuses of this president, but because the foundation of our democracy is the rule of law and that foundation is deeply at risk."

The White House did not immediately respond to a request for comment.

It is unclear precisely when lawmakers would take up the legislation, though it will almost certainly be after November's election or sometime in the new year.

The Protecting Our Democracy Act, as it is titled, is being rolled out almost a year to the day after Speaker Nancy Pelosi, announced the House would pursue impeachment charges against the president. It faces long odds in the current Congress, where the Republican-led Senate is all but guaranteed to eschew the legislation.

Yet its release less than six weeks before Election Day signals the changes congressional Democrats envision pursuing under a possible Joe Biden presidency, or if the party seizes a majority of Senate seats in November.

The measure includes several provisions to speed up judicial rulings on congressional subpoenas and emoluments cases, in which the House or Senate alleges that a federal official violated constitutional prohibitions on accepting gifts without congressional permission. The bill states that both types of cases should be decided by a panel of three judges, and that any appeals would go directly to the Supreme Court.

The slow process of judicial review has been a frequent stumbling block for House Democrats attempting to subpoena Trump administration officials, leading the party to decide to avoid court battles entirely during Trump's impeachment process, for fear of getting bogged down.

The package mirrors several measures to better regulate the relationship between the White House and Justice Department, which Democrats believe has been too cozy under the leadership of Trump and Attorney-General William Barr. It reflects a proposal from Representative Hakeem Jeffries, requiring the attorney-general to keep a log of certain communications with the White House and periodically share it with the DOJ inspector general and Congress, and a bill from Judiciary Chairman Jerrold Nadler, exempting the time a president or vice president spends in office from the statute of limitations for any federal crime.

Nadler's measure seeks to ensure that the Justice Department's policy against indicting sitting presidents does not become a means for avoiding prosecution entirely.

The measure also includes several provisions to limit the president's ability to interfere with congressional appropriations, by putting a time limit on emergency declarations and prohibiting the president from holding back congressionally-approved funding any later than 90 days before it expires – a change that aims to close a loophole the administration has used to effectively cancel unspent funds, particularly foreign aid, near the end of the fiscal year.

Finally, the package includes a new measure inspired by the recent parade of Trump administration officials using their federal office to engage in overt campaigning, a practice that was on stark display during last month's Republican National Convention. The bill gives the Justice Department's Office of the Special Counsel express authority to investigate suspected violations of the Hatch Act, and issue fines of up to $US50,000 for every violation that the president fails to discipline himself.

Why The Evil Parents On ‘Runaways’ Are So Hard To Hate

NCIS: New Orleans Cancelled, Will End With Season 7 at CBS