As Scott Walker, the genius singer of The Sun Ain’t Gonna Shine Anymore, dies at 76… the demons that turned the 60s pop idol into a recluse tormented by the bottle

His good looks and rich baritone vocals – on chart-topping hits such as The Sun Ain’t Gonna Shine Anymore – made him an instant Swinging Sixties heartthrob.

But Scott Walker soon fell victim to the pressures of fame, as drink and depression took their toll and he became increasingly reclusive.

The enigmatic US singer, whose death in London at the age of 76 was announced yesterday, would never recreate the success he had enjoyed as one-third of The Walker Brothers, whose other hits included No Regrets and Make It Easy On Yourself.

Once he was the UK’s most swooned-over pop idol – The Walker Brothers were as big as The Beatles, greeted by screaming fans everywhere they went. But the band split acrimoniously in 1967 and, despite a brief reunion in the Seventies, Walker increasingly retreated from the world of pop. 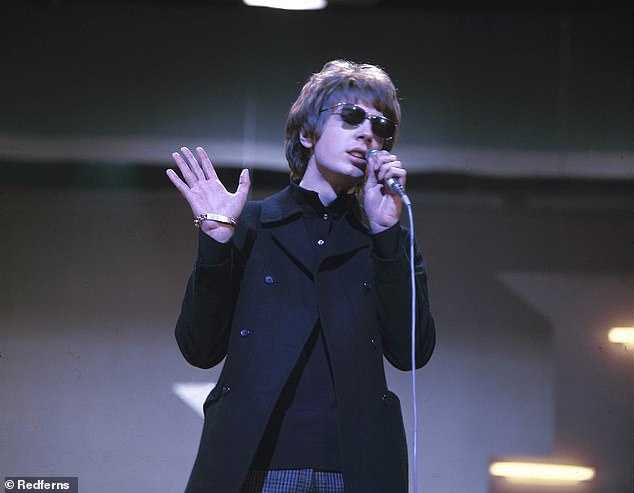 After the Walker Brothers split in 1967, Scott Walker retreated from the world of music

His solo career tailed off and Walker would re-emerge as an experimental artist praised by musicians but whose work flopped commercially. He is reputed to have had the lowest-selling album his record company had ever released.

A later work featured a percussionist repeatedly punching a slab of raw pork. Through it all, however, Walker’s haunting, velvety voice and mastery of heart-wrenching melancholy remained, to captivate fans and influence generations of musicians from David Bowie to Radiohead, Brian Eno to Pulp.

When Bowie was honoured with a 50th birthday special on Radio 1 in 1997, he was deeply moved when Walker sent him a personalised message. ‘I think he’s probably been my idol since I was a kid,’ said Bowie, his voice beginning to crack.

Paying tribute yesterday, Marc Almond –who had hits in the 1980s with synthpop duo Soft Cell before a successful solo career that included covering a song, Jacky, popularised by Walker – described him as an ‘absolute musical genius’.

‘He gave me so much inspiration, so much I owe to him and modelled on him, even down to my early haircut and dark glasses. He was enigmatic, mysterious and with some of his latter recordings, to me, infuriating,’ he said. 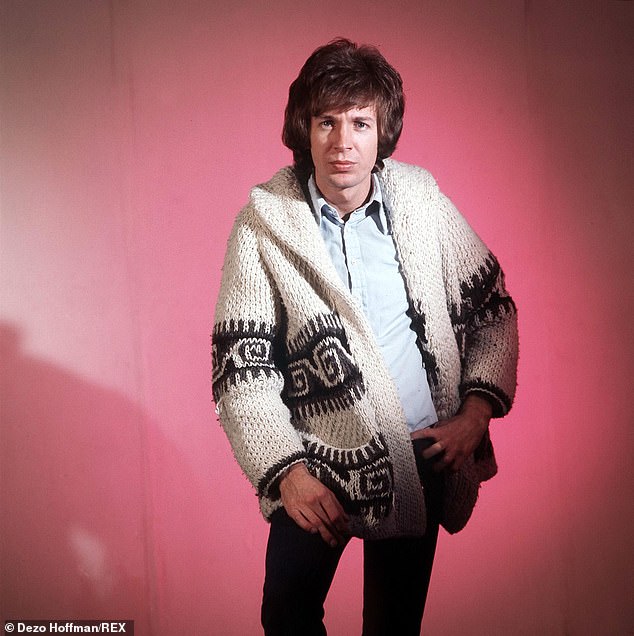 Walker was an American musician who was born Noel Scott Engel in Hamilton, Ohio, in January 1943

Radiohead singer Thom Yorke said: ‘So very sad to hear that Scott Walker has passed away, he was a huge influence on Radiohead and myself, showing me how I could use my voice and words. Met him once at Meltdown [a music festival Walker curated at London’s Southbank Centre], such a kind gentle outsider.’

Midge Ure, who co-organised Band Aid with Bob Geldof and had a hit in 1982 with a cover version of No Regrets, remembered Walker on Twitter as ‘the man with the mahogany voice’.

Scott Walker was born Noel Scott Engel in Hamilton, Ohio, in January 1943, the only child of Noel Engel, a geologist.

He moved with his mother Betty to Los Angeles after his parents’ divorce. He began his career as a session bassist but in the early Sixties he joined Gary Leeds and John Maus to form The Walker Brothers, named after the fake identities which the boys – none of whom was related – used to get into bars.

The trio moved from America to London in 1965 and enjoyed instant success with Make It Easy On Yourself, their version of the Burt Bacharach song topping the charts.

My Ship Is Coming In was also a huge hit and the following year they topped the UK charts again with The Sun Ain’t Gonna Shine Anymore, which gave them their biggest US success.

Their popularity among teenage girls soared but the strain began to tell.

‘It was a question of being well known without really deserving it,’ Walker said. ‘I thought my fans were buying my records for the wrong reasons.’

After their last two singles failed to reach the top ten, the group split in late 1967. 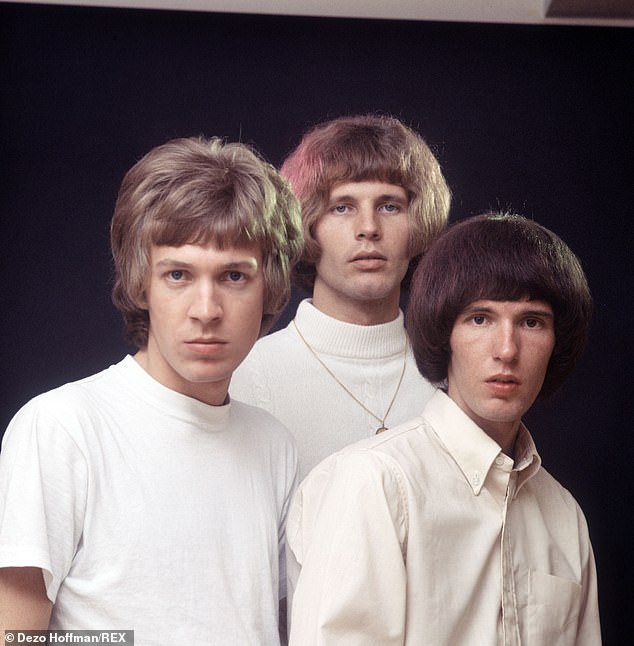 The Walker Brothers were at one time as big as The Beatles, greeted by screaming fans everywhere they went

Walker released the successful solo albums Scott, Scott 2 and Scott 3, and was given his own BBC TV series in 1969. At the same time, he began to incorporate darker songs into his repertoire of ballads, Broadway hits and original compositions.

He recorded several songs by the brooding Belgian singer Jacques Brel and even studied Gregorian chant at a monastery on the Isle of Wight. When his album Scott 4 – for which he wrote all the songs – failed to chart, Walker consoled himself with drink and fell into depression.

‘I snapped,’ he said years later. ‘The pressure was everywhere and, in my crazy imagination, I thought, “I’d better keep doing this just to stay in the game”.’

In 1975, The Walker Brothers reunited but achieved only one chart success, No Regrets, and disbanded again in 1978.

It would be six years before the world heard any new music from Scott Walker. When it finally arrived, on his album Climate Of Hunter, many were shocked.

Not surprisingly, perhaps, as he had insisted on keeping the melody of each song a secret from the musicians so as to preserve their intensity.

Music critics loved it, but it was said to have been record label Virgin’s lowest-selling album ever. 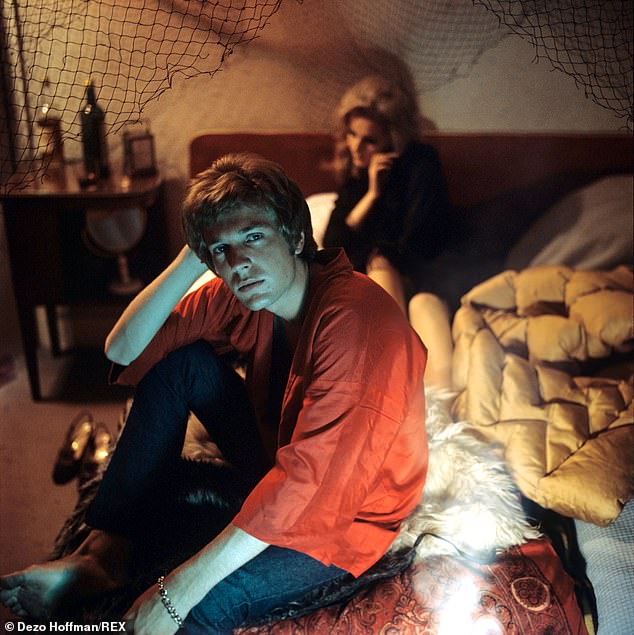 Walker then studied fine art and a further 11 years would pass until his next album.

‘A friend of mine says I’m not a recluse, I’m just low-key,’ he once said in an interview. ‘Generally if I’ve got nothing to say, it’s pointless to be around.’

When he did have something to say again, it was on the bleak, avant-garde album Tilt in 1995. With its ruminations on love, sex and death, it set the tone for Walker’s subsequent releases.

His 2006 album The Drift included a song – featuring that unusual pork percussion – based on the execution by Italian partisans of the dictator Benito Mussolini, when the fascist leader’s mistress Claretta Petacci insisted on dying with him.

By then Walker was artistically a million miles from the tousle-haired chart-topping crooner of his youth.

‘I have long since stopped worrying about fitting in, in any way. I’m an outsider, for sure. That suits me fine. Solitude is like a drug for me. I crave it,’ he said in one of his rare interviews.

In 2017, Walker’s music was celebrated with a Proms concert at London’s Royal Albert Hall. Last year, he wrote and produced the score for the film Vox Lux, starring Natalie Portman and Jude Law.

Another recent project saw him compose music for dance company BalletBoyz, whose programme Fourteen Days was performed at Sadler’s Wells. Yesterday his current record label 4AD confirmed that Walker, who had been living in west London, died on Friday from cancer.

In a statement, the company said: ‘Scott Walker has been a unique and challenging titan at the forefront of British music.

‘Audacious and questioning, he has produced works that dare to explore human vulnerability and the godless darkness encircling it…

‘From teen idol to cultural icon, Scott leaves to future generations a legacy of extraordinary music.’

Walker is survived by his daughter Lee, from his marriage to Mette Teglbjaerg, his granddaughter Emmi-Lee and his partner Beverly.