Danish health chiefs have taken to social media to debunk doom-mongering claims that Covid hospitalisation and death rates are both soaring after dropping nearly all of its virus curbs.

Experts at the Statens Serum Institut (SSI), the Government agency responsible for pandemic preparedness, are publicly dismissing misinformation about the state of the Scandinavian nation’s outbreak.

Daily Covid cases and hospitalisations have reached record highs in February, while deaths are nearly level with previous peaks and trending upwards.

But the agency has hit back at backlash and insisted that soaring tolls are being driven by ‘incidental’ cases — mirroring a trend seen in the UK.

Denmark became the first country in Europe to lift all domestic Covid restrictions at the start of the month, ending rules on face coverings, vaccine passports and work from home guidance. Only self-isolation rules remain.

Critics of the move, which England is set to follow next week, say it is dangerous because it puts the vulnerable at more risk and increases the risk of a more severe variant emerging.

The number of infected patients admitted to hospital every day in Denmark (shown in graph) rose to the highest ever level in Februar, with 451 hospitalisations recorded at the spike on 7 February. However, Government scientists said incidental admissions – people who test positive but are primarily in hospital for another reason, but included in the statistics – are behind the rise

Denmark’s daily Covid deaths – which include anyone who died within 30 days of testing positive on a PCR test – show virus fatalities nearly rose to levels seen in the wave last winter. Some 38 deaths were recorded on February 13, compared to the high of 39 on January 19 2021

Despite official data showing daily Covid deaths are near record highs, the Statens Serum Institut, Denmark’s Government agency responsible for pandemic preparedness, took to Twitter to clarify that the figures, which include all deaths ‘with’ Covid, are inflated by record infection levels

Dr Eric Feigl-Ding, an epidemiologist at the Federation of American Scientists (FAS), accused the Danish Government of ‘losing their frigging minds’ by releasing Covid restrictions.

And Dr Eric Topol, a cardiologist at US research centre Scripts Research, warned the country’s Covid outbreak is ‘not looking good’, highlighting that daily deaths are at ’67 per cent’ of the previous peak and have a ‘steep ascent’.

WHAT IS THE COVID SITUATION IN DENMARK?

On February 1, Denmark became the first country in Europe to lift all Covid curbs, ending rules on face coverings, vaccine passports and work from home guidance.

Following the move, daily Covid cases and hospitalisations have reached record highs in February, while deaths are nearly level with previous peaks and trending upwards.

Nearly 60,000 infections, 451 hospitalisations and 38 deaths were recorded per day at peaks over the last fortnight.

The data has given fuel for scientists to argue that the country’s approach isn’t working.

But Government scientists argued that incidental virus hospitalisations and deaths are on the rise as society opens up.

The country, which counts virus fatalities as deaths within 30 days of testing positive on a PCR test, saw 5.21 deaths per million people registered yesterday.

This marked the highest daily tally since its peak last winter, according to the Oxford University-backed statistical platform Our World in Data.

But the SSI scientists said this figure includes all deaths among people infected with the virus, rather than those which were caused by the virus.

They said: ‘Since Omicron became the dominant variant in Denmark a lot of people get infected.

‘An increase in numbers of infected also makes it easier for a person to die a number of days after an infection without having anything to do with the Omicron infection.’

For exactly the same reason, the scientists also dismissed claims ‘many people are hospitalised’ because of Covid.

And four in 10 coronavirus admissions are now primarily being treated for another cause, according to Government data.

The SSI said the proportion of Covid patients who are hospitalised because they are unwell with the virus has been falling since July.

The agency also disregarded claims that Denmark has decided Covid ‘does not exist anymore’ as ‘incorrect’. 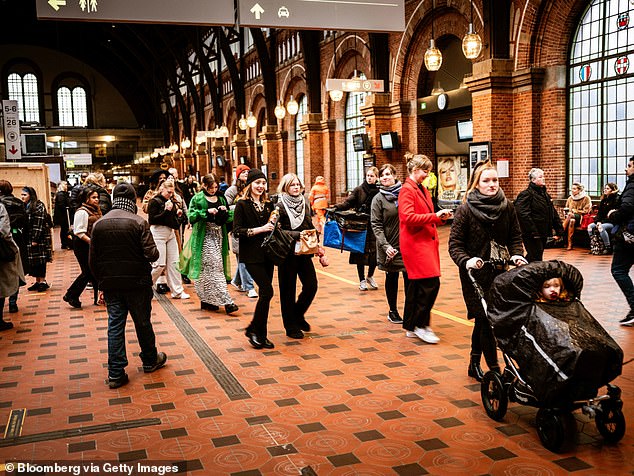 Officials in Denmark lifted all Covid curbs in the country on February 1, ending rules on face coverings, vaccine passports and work from home guidance. Pictured: commuters at Copenhagen Central Station on February 1 following the removal of Covid restrictions 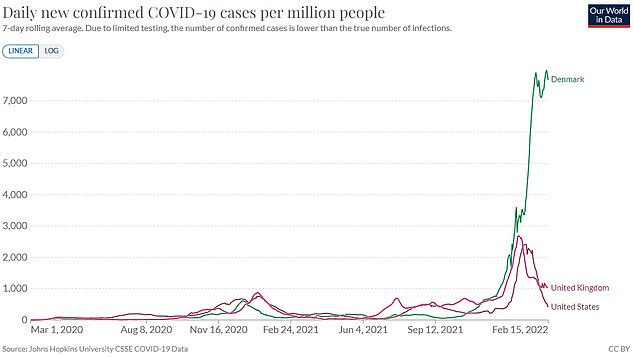 Figures from Oxford University platform Our World in Data, shows Denmark recorded 7,839 Covid cases per million people on February 14. For comparison, 1,019 cases in the UK and 457 infections in the US were registered per million people 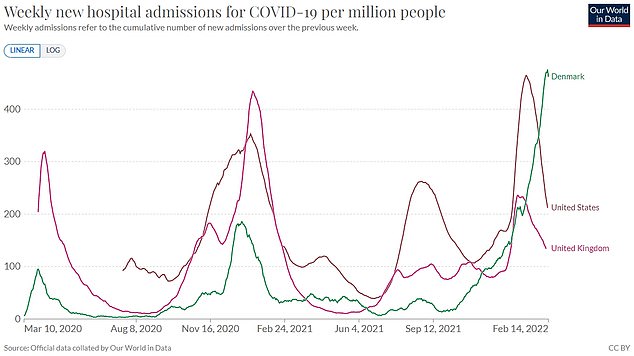 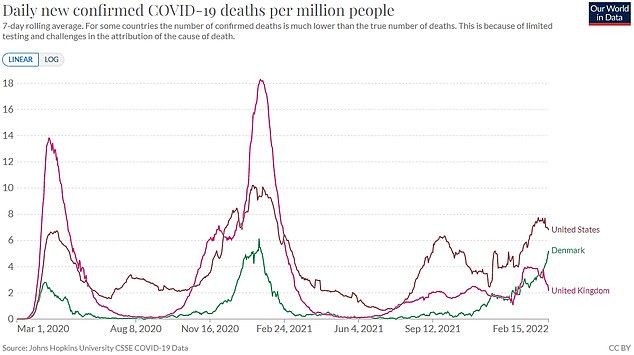 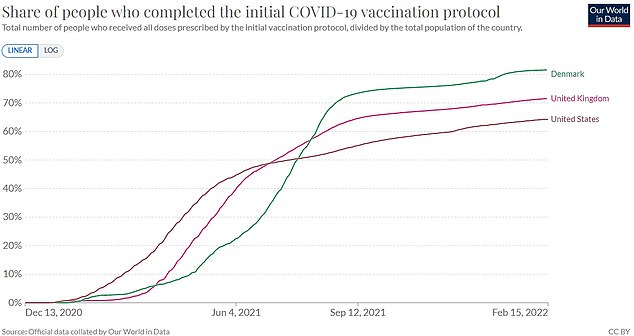 Covid is still circulating but is not considered ‘an infection critical to society’, the SSI said.

The dominant Omicron strain is milder than previous variants and 81.5 per cent of the population have received two vaccine doses, which ‘largely protects against severe disease’, it said.

‘Therefore, Covid does not have the same impact on society and the population as earlier in the pandemic,’ the scientists said.

This allowed virus curbs to be lifted on February 1 but the ‘Danish authorities very much acknowledge the presence of Covid’, according to the SSI.

Danish people are still advised to wear face masks and show vaccine passports at hospitals and care homes, while students are advised to test regularly.

Heathrow passenger numbers were 89% down in July