Elizabeth City, NC: A North Carolina deputy shot and killed a black man while executing a search warrant on Wednesday (Thursday AEST), authorities said, spurring an outcry from a crowd of dozens that immediately gathered at the scene and demanded law enforcement accountability.

The Pasquotank County Sheriff’s deputy was placed on leave pending a review by the State Bureau of Investigation, Sheriff Tommy Wooten II said at a news conference.

He said the deputy shot Andrew Brown jnr about 8.30am while serving the warrant in Elizabeth City, a municipality of about 18,000 people 275 km northeast of Raleigh. 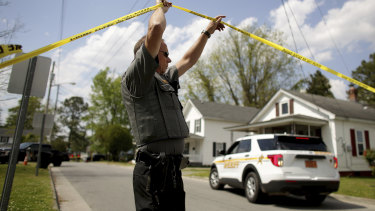 Law enforcement investigate the scene of a shooting, Wednesday in Elizabeth City.Credit:AP

Wooten did not identify the deputy and did not say what the warrant was for. Court records show Brown was 42 years old and had a history of drug charges and a misdemeanor drug possession conviction.

The deputy was wearing an active body camera at the time of the shooting, said Wooten, who declined to say how many shots the deputy fired or release any other details, citing a pending review by the State Bureau of Investigation. WAVY-TV reported that neighbours heard multiple shots.

A car removed from the scene appeared to have multiple bullet holes and a broken rear windshield. 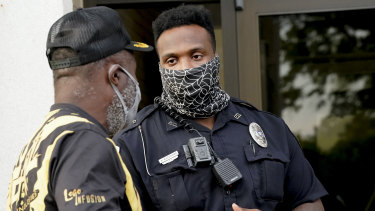 A citizen speaks with an officer in front of the municipal building after at least one Pasquotank County Sheriff’s deputy shot and killed a black man while executing a search warrant, the sheriff’s office said.Credit:AP

Among the roughly 100 people who gathered at the scene of the shooting was Rivers, president of the Pasquotank County chapter of the NAACP, who criticised the sheriff’s office for taking hours to release details.

“When is it going to stop? We just got a verdict yesterday,” Rivers said in a phone interview, referring to the guilty verdicts handed down on Tuesday in the trial of former Minneapolis police officer Derek Chauvin in the death of George Floyd.

“Is it open season now? At some point, it has to stop. We have to start holding the people in charge accountable.”

Brown’s grandmother, Lydia Brown, and his aunt, Clarissa Brown Gibson, told The Associated Press that they learned about his death through a TV news report. Both said they want the shooting thoroughly investigated.

“I am very upset. Andrew was a good person,” Lydia Brown said. The deputy “didn’t have to shoot him like that.”

Clarissa Brown Gibson said: “We want to know if he was served with a warrant, why the shooting over a warrant?”

The (North Carolina) State Bureau of Investigation will turn the findings of its review over to District Attorney Andrew Womble, who pledged a thorough and deliberate inquiry.

“What we are looking for at this time will be accurate answers and not fast answers,” Womble told the news conference.

“We’re going to wait for the full and complete investigation … and we’ll review that and make any determinations that we deem appropriate at that time. This will not be a rush to judgment.”