Home » World News » Diary recounting Battle of the Somme sold for £26,000 at auction

Battered diary written by young soldier recounting horror of the trenches during Battle of the Somme in 1916 is sold for £2,600 at auction

A battered diary which was written by a young British soldier recounting the Battle of the Somme in chilling detail from the trenches has fetched £2,600 at auction.

The historic journal was found gathering dust in a Midlands barn after being penned by Private Arthur Edward Diggins from the Western Front over a century ago.

Written in pencil, it describes the grim reality of the bloody conflict which claimed more than 300,000 lives and the horrors of trench warfare during the First World War. 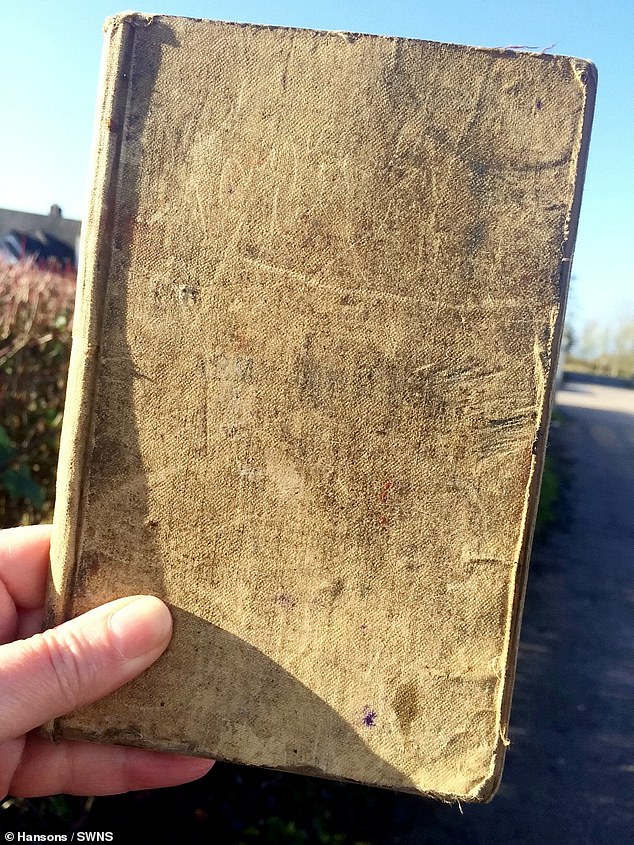 A battered diary which was written by a young British soldier recounting the Battle of the Somme has fetched £2,600 at auction 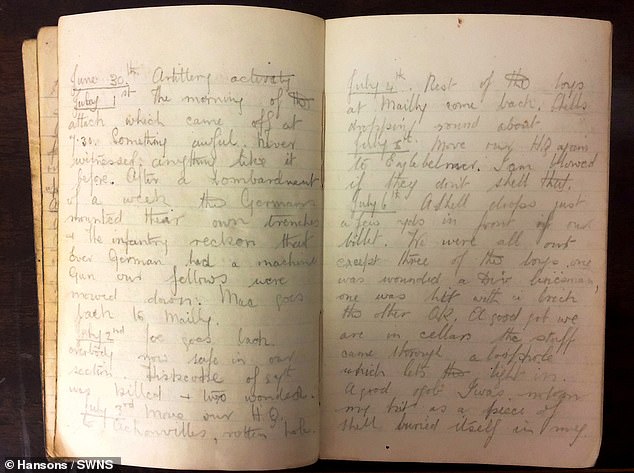 The 104-year-old notebook was expected to sell for £300-£400 when it went under the hammer at Hansons Auctioneers, but it ended up smashing its estimate to fetch £2,600 in Etwall, Derbyshire, on Friday.

‘We had interest from all over the world in this item and it thoroughly deserved to soar at auction.

‘I have never had a diary that covers the first day of the Battle of the Somme in my 45 years collecting.

‘To think that it had been languishing in a barn for decades is quite astonishing. Thank goodness it was discovered and saved for posterity.’ 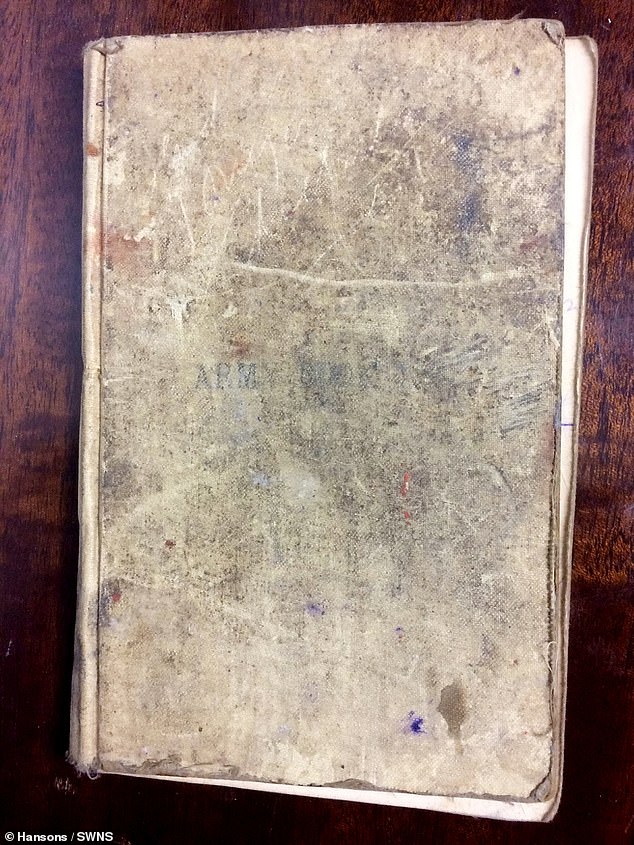 The diary reveals extracts of his daily life such as spending his 21st birthday away from home as well as a miracle escape when a piece of shell from a German bomb landed on a candle in his living quarters.

The harrowing account also includes an entry from the first day of the battle – July 1, 1916 – in which Pte Diggins wrote: ‘Something awful. Never witnessed anything like it before.

‘After a bombardment of a week the Germans mounted their own trenches and the infantry reckon that every German had a machine gun*.’

Pte Diggins was one of the lucky few to survive the conflict before marrying his wartime sweetheart and going on to become a father in Islington, London.

Mystery surrounds how his diary came to be found in a Leicestershire barn where it had been stored alongside other military memorabilia for decades.

Mr Stevenson added: ‘The owner had no idea who any of the items related to but said his mother had been the recipient of old family heirlooms.

‘It’s a complete mystery how this Somme diary ended up in the Midlands, particularly as Arthur was born in London.

‘I’m just relieved such an important piece of military history has been found and can now be preserved. 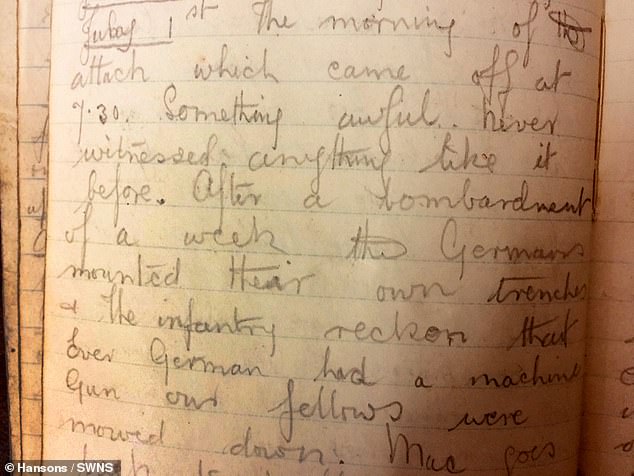 The diary, written in pencil, describes in bloody detail the horrors of trench warfare and includes an entry from the first day of the Battle of the Somme

‘When I opened it, I was amazed – and I had to flick straight to the July 1 entry.’

The first day of the Battle of the Somme, which lasted from July 1 to November 18, 1916, is regarded as the bloodiest in British Army history.

One man was killed every 4.4 seconds. Somme casualties went on to top one million, including 300,000 deaths.

Mr Stevenson, who discovered the diary at a valuation event, added: ‘The fact that both the diary and the soldier survived is pretty remarkable, given those awful statistics.’

The historic journal bears scuffs and stains on its cover and a word now hardly legible, ‘Army’.

The opening page states that the diary was started on February 13, 1916 but ends abruptly on October 11 of that year.

Mr Stevenson added: ‘Because of this we feared Arthur must have been a casualty of the conflict but my research proved otherwise.

‘Not only did he survive the First World War, he returned to his loved ones in England and became a husband and father.

‘I’m always delighted when finds like this come in.

‘They provide us with an opportunity to look back at important moments in history and celebrate the stories of long-forgotten servicemen.’ 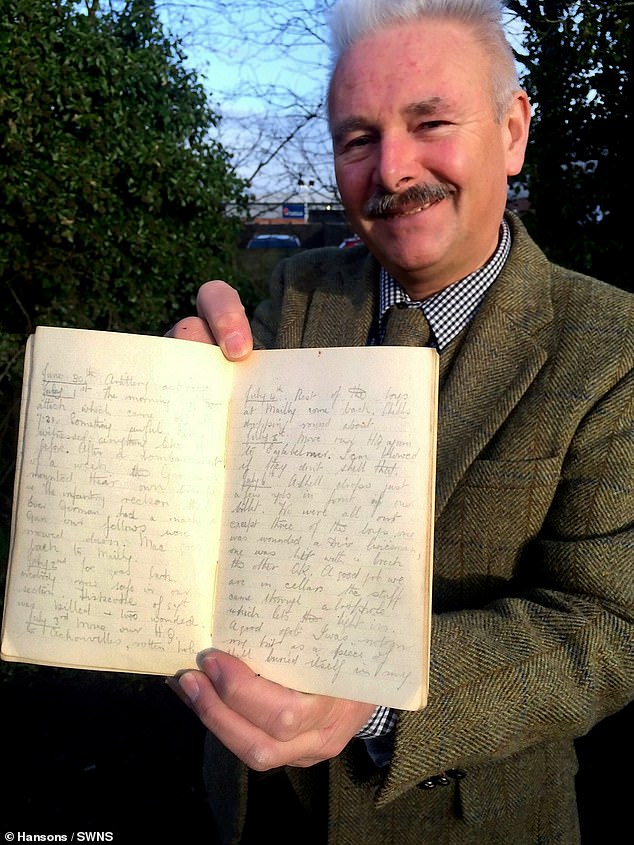 Adrian Stevenson, head of militaria at Hansons, described the diary as a ‘stunning find’ and that he had never found an account of the first day until now

He later signed up to serve with the Royal Engineers, Signals section, serial number 1412. He had the rank of Sapper (Private).

He was at the Somme on the Western Front in France with the 29th Division. At that time, he would have been just 20-years-old.

His wartime diary reveals extracts of daily life, such as, July 6, 1916: ‘A shell drops just a few yards in front of our billet. We were all out except three of the boys.

‘One was wounded, a good job I was not on my bit as a piece of shell buried itself in my candle. Oh, you lucky devil’. 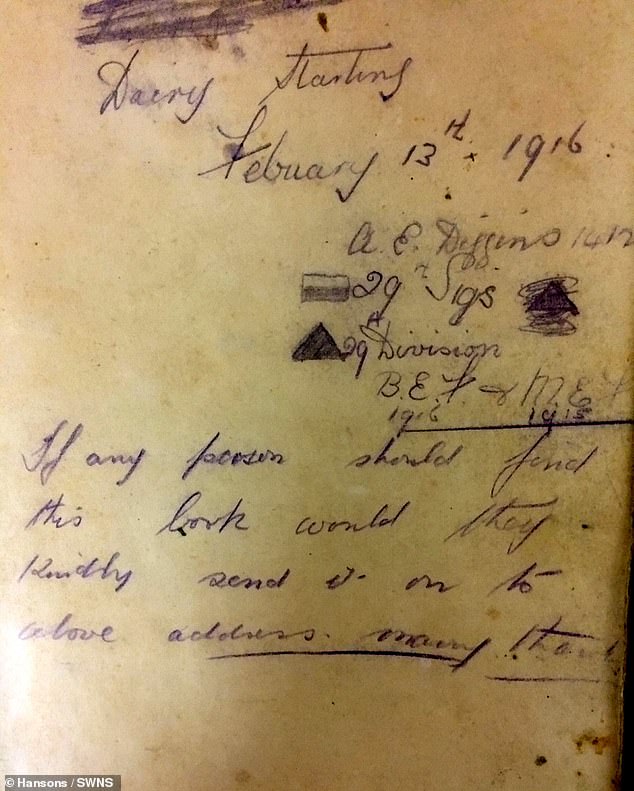 More than 300,000 soldiers lost their lives during the First World War conflict, which took place from July 1 until November 18 ,1916

‘Start making a model aeroplane out of the copper dome of St Jacques Church, Ypres. A few curious’.

The last line in his diary is chilling in its simplicity: ‘Well, we are at the Somme front once more’.

Call the Midwife season 10: When will the season air in the US?

Saffron Drewitt-Barlow – I’d cry if I had less than $1m in the bank, I've spent $85k in a day by hotel pool– dad hit the roof but it’s only money