THIS is the distressing moment shoppers kick and hit a Staffie with a block of wood to stop it mauling a pug.

People watched on in horror as the little dog was savaged by another "tossing it around like a rag doll" for 20 minutes. 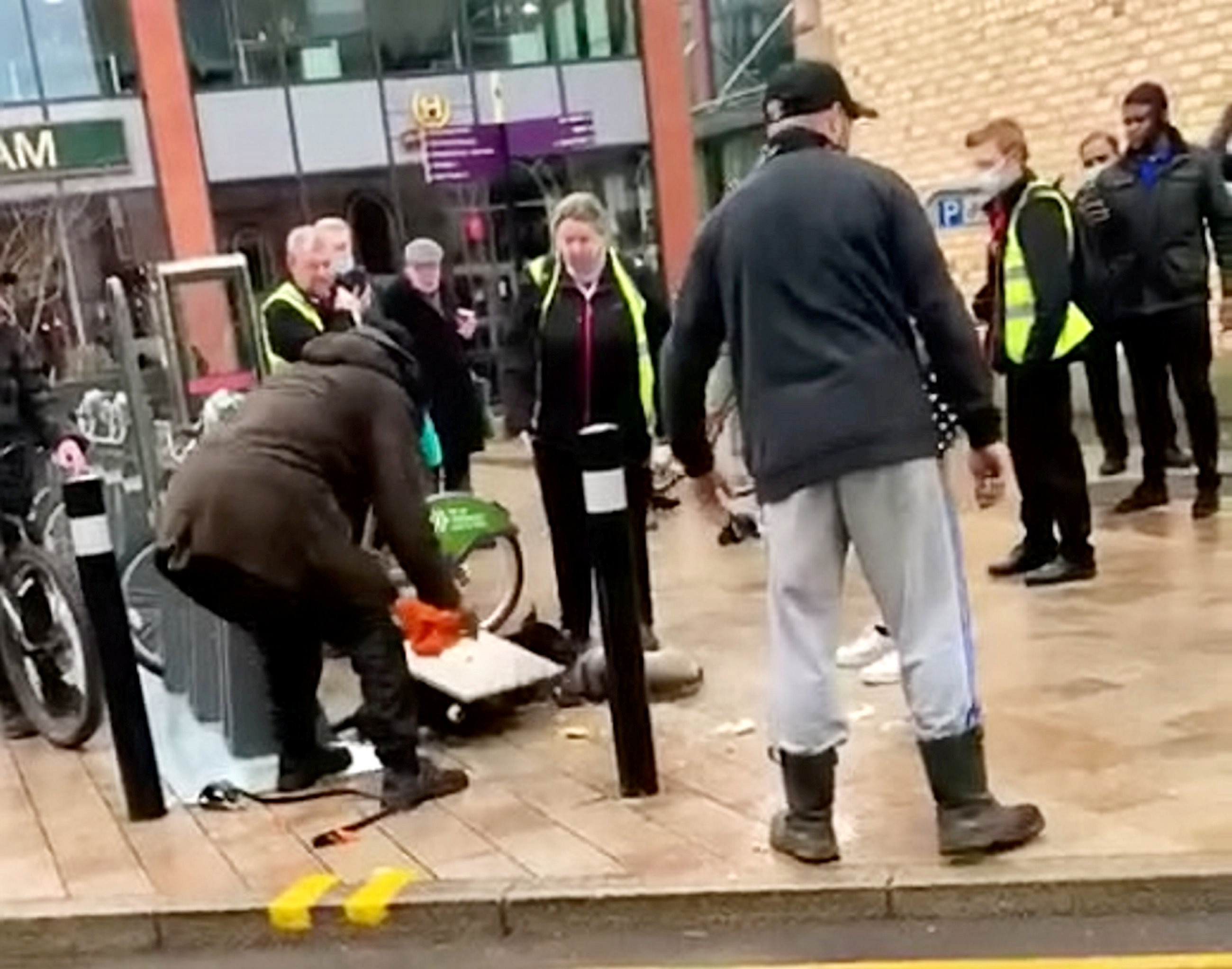 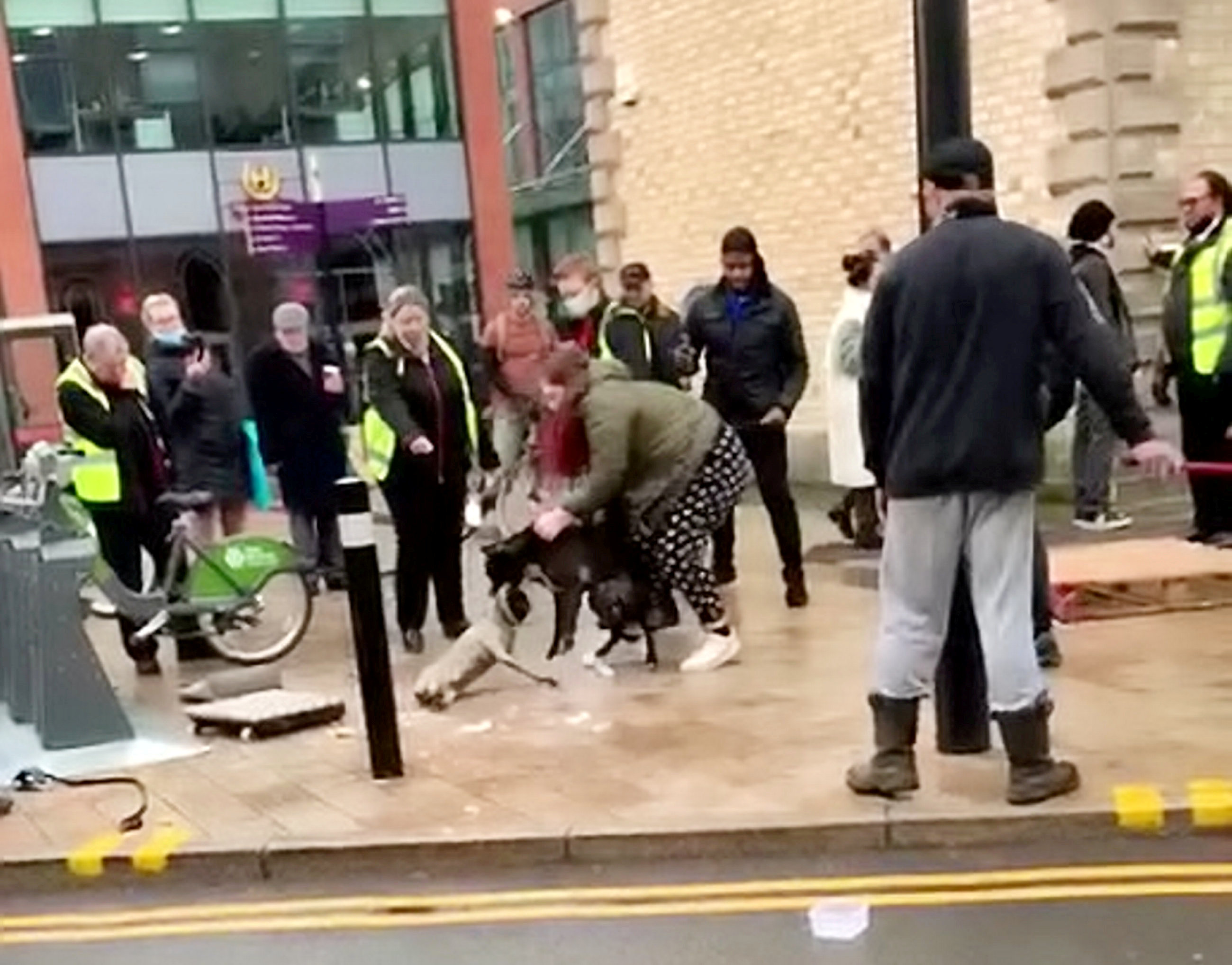 Members of the public tried to pull the bigger animal away, after it ran towards the smaller dog and attacked it outside The Sunbeam pub in Wolverhampton.

They hit the aggressive hound with an umbrella, a lead and a wheel board in an attempt to force it to let go, as it kept it's jaw clamped on the pug.

But the out-of-control dog is unable to be stopped, despite the efforts of bystanders.

People frantically shout "move" and "get off" while a woman, who appears to be the pug's owner, tries to pull the smaller dog free.

The same woman can then be heard wailing before the pug eventually goes limp.

The dog continues to attack for another minute, tossing the pug from side to side as a man can be heard saying: "It's dead."

Two-year-old Gucci was mauled by what Perita thinks was a Pitbull/Staffordshire Bull Terrier cross at 11.30am on April 9. 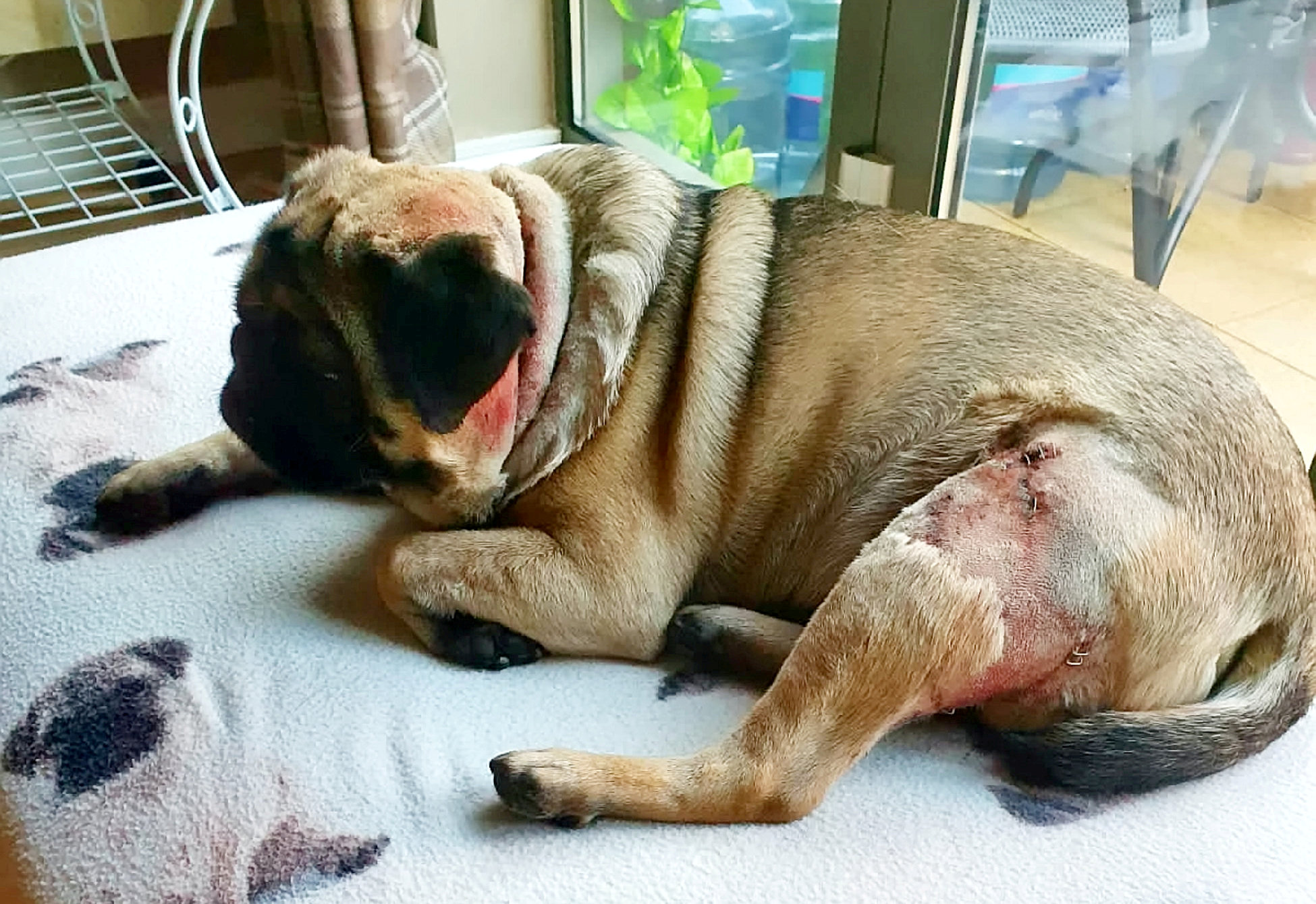 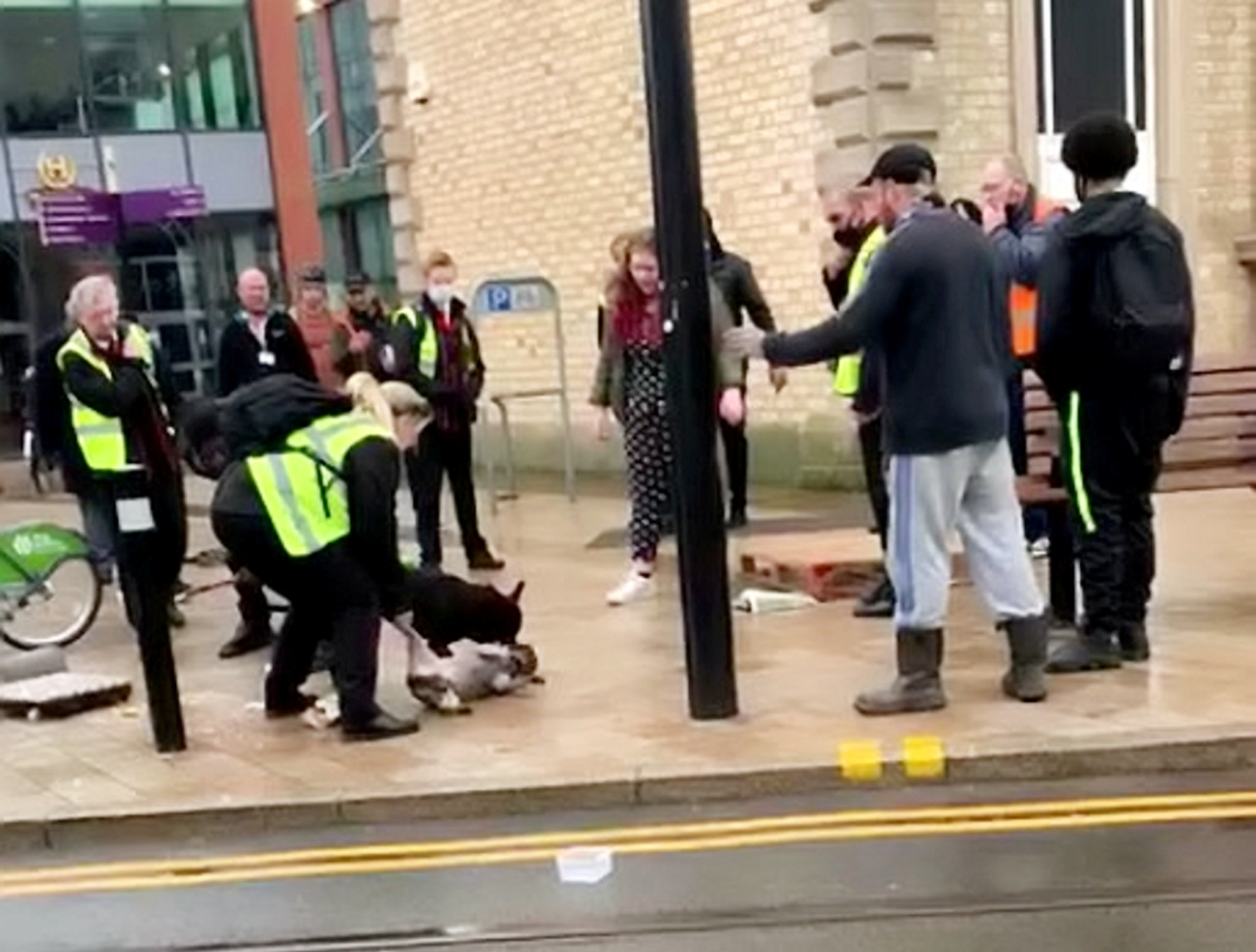 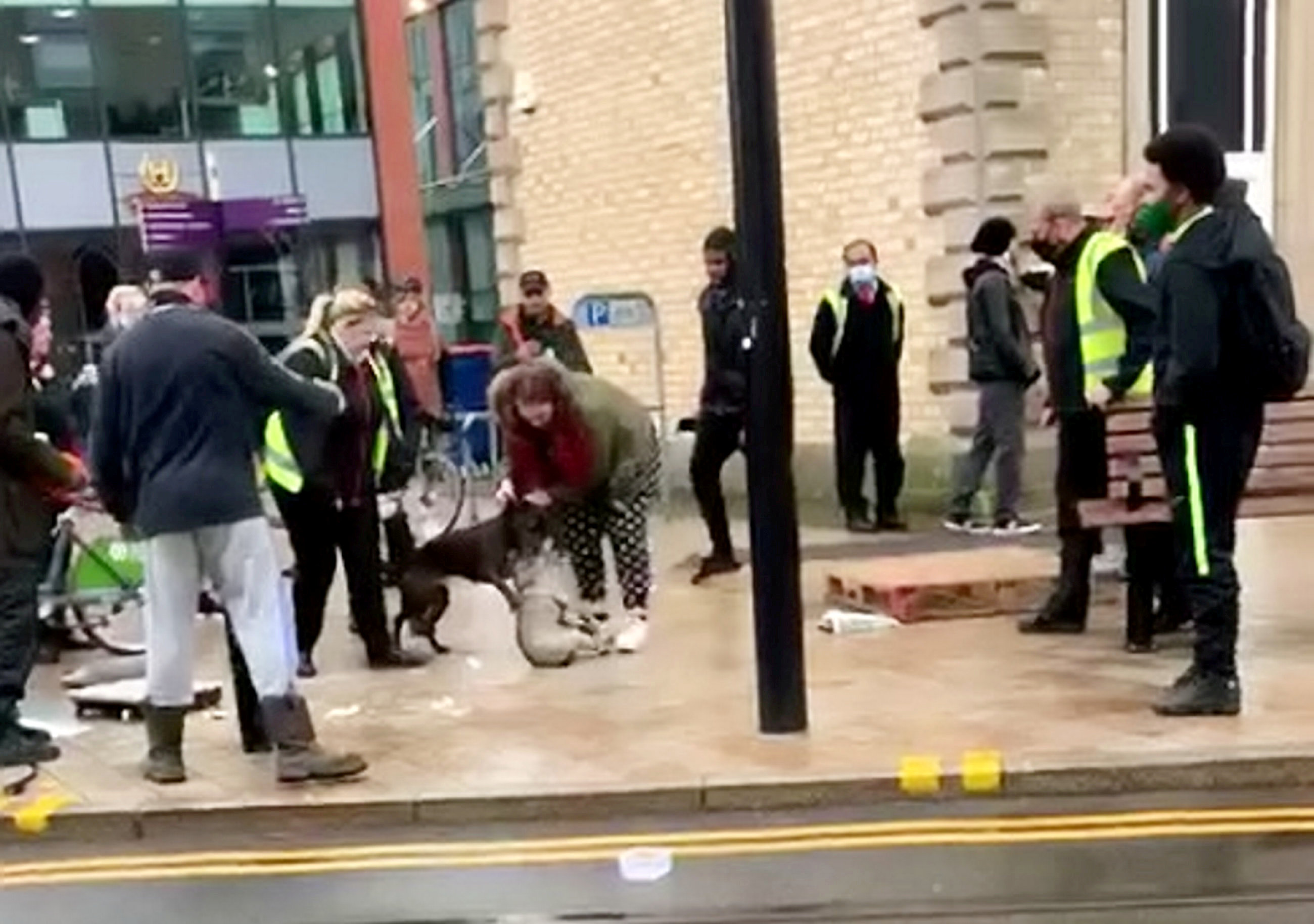 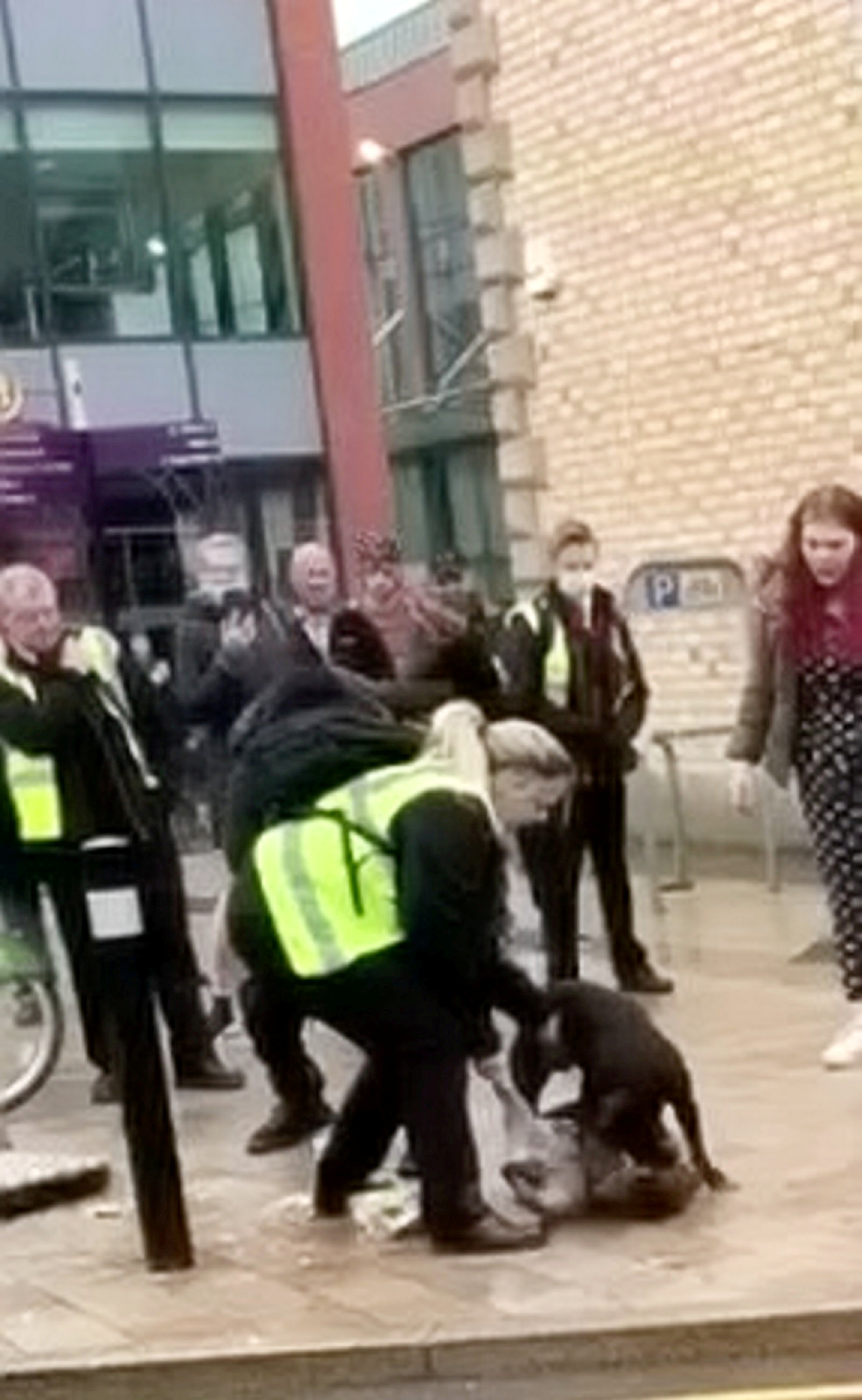 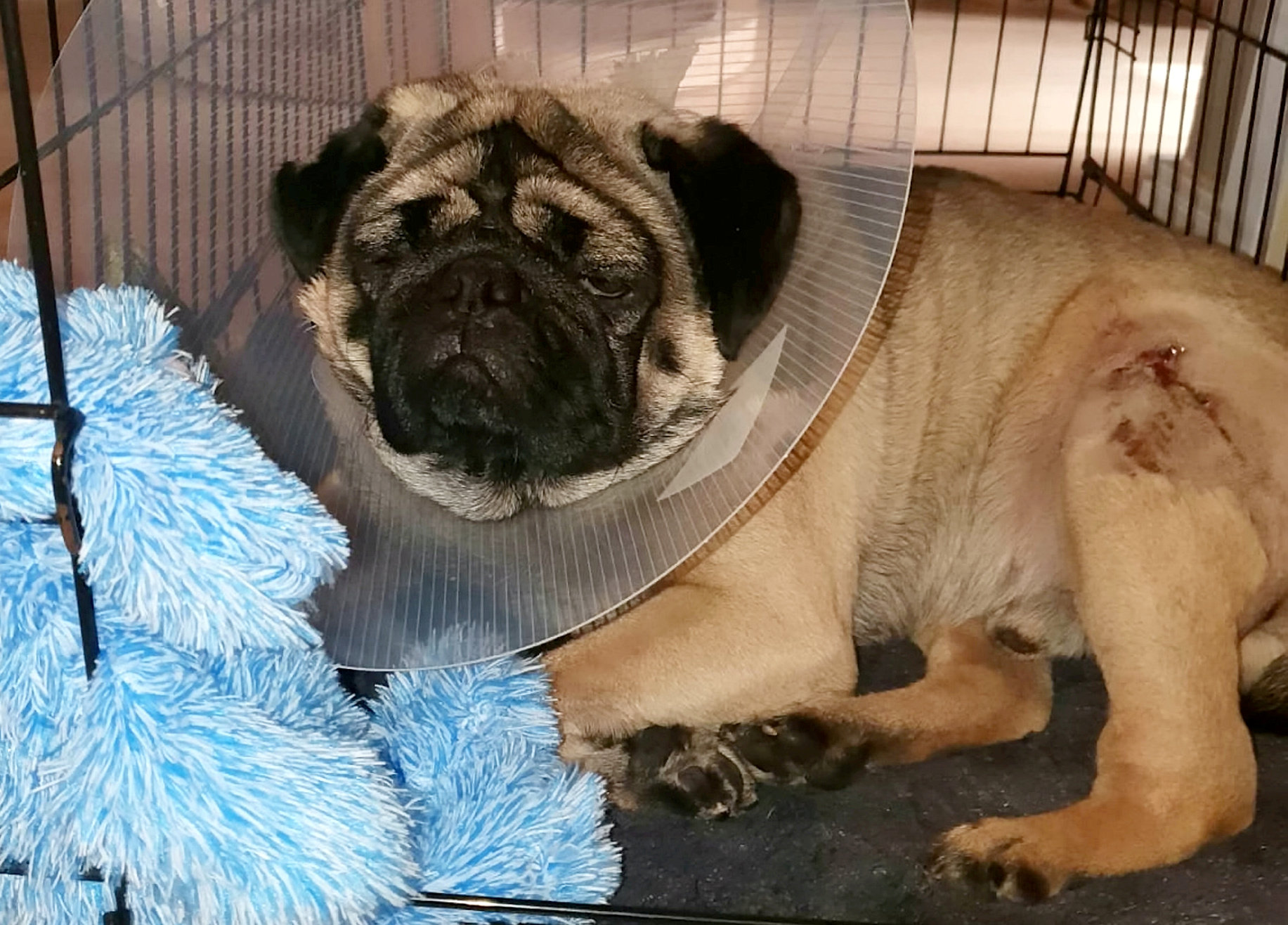 Gucci suffered horrific injuries to his neck, leg, eye, ears and body and a vet said he is "lucky to be alive".

Perita, who owns a vaping shop in Wolverhampton and lives in the city centre, said: "I was just walking towards my shop when I heard a scratching noise on the floor.

"I turned around and saw a dog bounding towards us off the lead with its tail up and I thought 'this isn't good'.

"I saw a girl standing there talking on her mobile phone but I did not know the dog was hers. She didn't seemed too fussed at the time about what was going on.

"Loads of people rushed to help, including several bus drivers who have said they couldn't finish their shift afterwards – everyone thought Gucci was dead.

"I was terrified. I pulled Gucci's harness but I could not lift him. The dog grabbed Gucci by his leg and out of my hands – it kept ragging him from side-to-side.

"I was hysterical – the dog would not let go and I've been so traumatised I'm now seeking help. I see it every time I close my eyes.

"Eventually the dog was pulled free and I rushed him to the vets, I didn't know if he would survive or not.

"I've had him since he was eight-weeks-old and everybody loves Gucci. I was so worried. It was an absolute bloodbath."

Gucci's injuries were treated at St George's Vets, Wolverhampton city centre, and he is now on a course of antibiotics and eye drops.

Perita added: "He is very poorly – he has injuries all over his body. I can't even pick him up as I am worried about hurting him.

"He keeps flinching now and looks very depressed. I love him, I live alone and he is my companion."

Last week we told how two-year-old boy miraculously survived a ferocious dog attack thanks to his woolly hat.

Paul-Naylass Passmore was walking to nursery with his mum Courtney Jones, 25, and sister Evelyn-Rose, 3, when an Akita ran out of a nearby flat and tried to clamp its jaws around his head in South Staffordshire 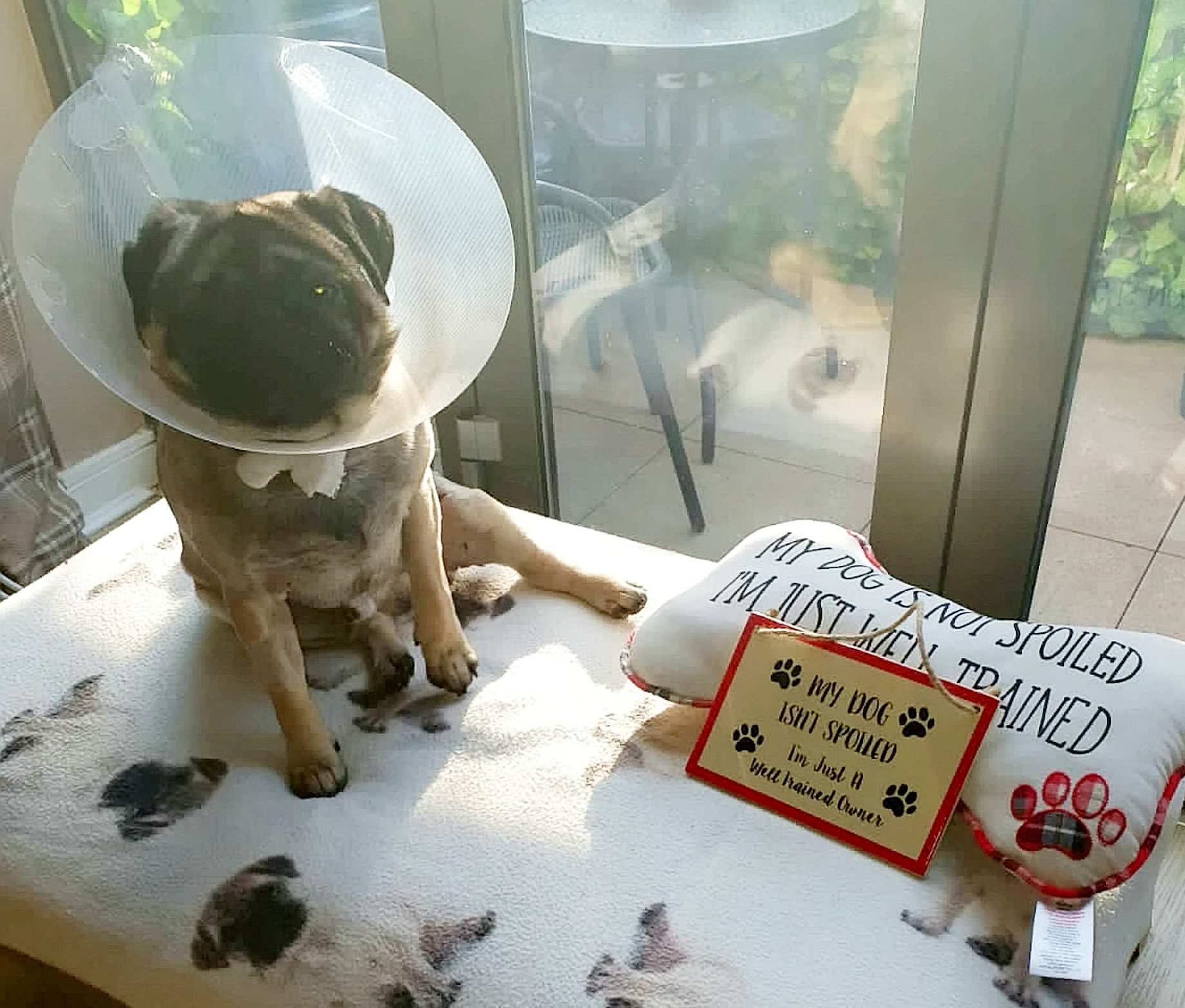 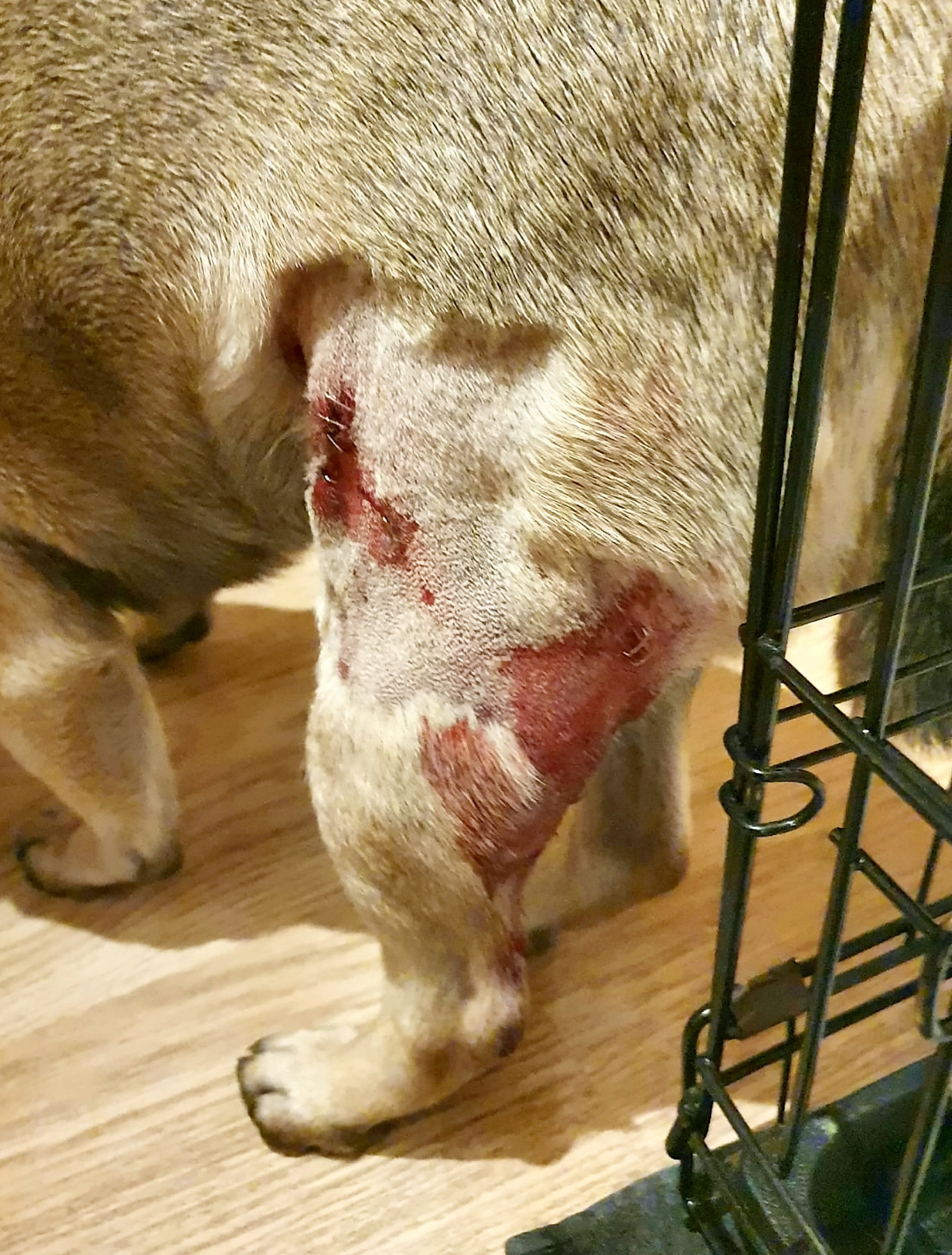 Lisa Rinna Slams ‘Karens' Who Want QVC to Fire Her