Dominic Raab today tried to pour cold water on growing claims of a split between Boris Johnson and his top scientist Sir Patrick Vallance over whether the UK could face a second nationwide coronavirus lockdown.

Mr Johnson said he ‘certainly’ does not want to impose draconian restrictions again as he likened the ‘tool’ of national lockdown to the UK’s Trident nuclear deterrent which he does not want to ever have to use.

But Sir Patrick, the Government’s chief scientific adviser, told MPs on Friday coronavirus ‘challenges will be very much greater’ this winter and if there is a spike in infections ‘national measures’ could be required.

Mr Johnson and Sir Patrick also clashed on the issue of working from home with the PM urging people to head back to their desks in August despite the latter saying there was ‘absolutely no reason’ to change the current approach.

Despite the appearance of divisions between the two men, Mr Raab insisted this morning that they are on the same page as he said ministers listen to Sir Patrick’s advice ‘very carefully and seriously’. 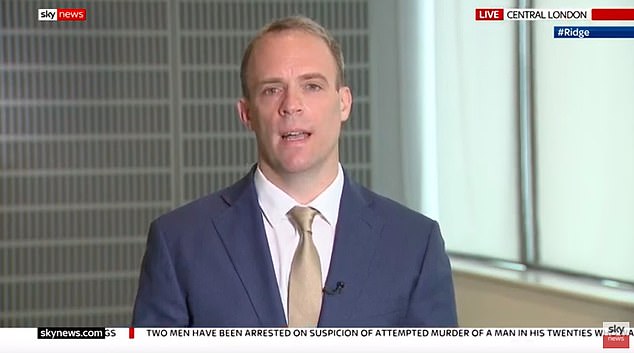 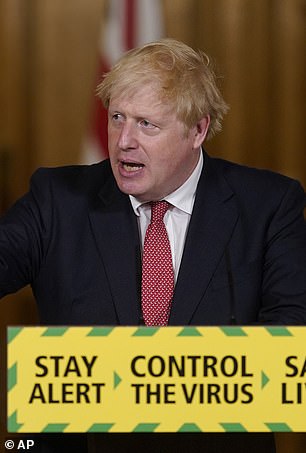 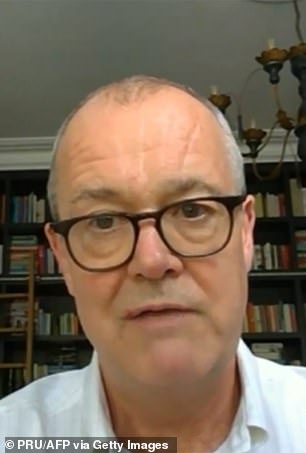 Mr Johnson said he does not want to impose a second nationwide lockdown, comparing it to the nuclear deterrent which he never wants to have to use. But Sir Patrick warned on Friday a spike in coronavirus in the winter could require the reimposition of ‘national measures’

Told on Sky News that Mr Johnson and Sir Patrick appeared to be increasingly ‘out of step’, Mr Raab replied: ‘No, I don’t think that is right. National measures and national lockdown aren’t the same thing.

‘We take Sir Patrick Vallance, one of our finest public servants, advice very carefully and seriously and we look at it right the way across the board and ultimately politicians, the Prime Minister, myself and others, take responsibility.

‘The key thing is, that the Prime Minister has been emphasising, is the ability to take locally targeted measures and we have got new powers for local authorities that are going to be put in place this week.

‘[They] will enable us to take targeted action to avoid a national lockdown and indeed, that is what has allowed us, having that power, whether it is on the testing and the tracing but also the targeted local measures we can take… also allows us to move forward and ease restrictions as we have been doing consistently but only when the conditions are right, when we know we have made the progress I have just described in getting the prevalence of this disease down.

Mr Johnson set out at a briefing on Friday his timetable for the further loosening of coronavirus restrictions as he said he hopes the UK will be back to something close to normal by Christmas.

Sir Patrick and Professor Chris Whitty, the chief medical officer, were both notably absent from the PM’s press conference, in a move which further ignited speculation of a worsening split between ministers and their experts.

Mr Johnson told The Sunday Telegraph that he does not want to impose another national lockdown as he said he does not believe one will be required.

‘I can’t abandon that tool any more than I would abandon a nuclear deterrent,’ he told the newspaper.

‘But it is like a nuclear deterrent, I certainly don’t want to use it. And nor do I think we will be in that position again.’

His comments appeared to be in stark contrast to remarks made by Sir Patrick to a Lords committee on Friday.

He told peers: ‘As you release measures it is inevitable as you get more contacts that you will see more cases.

‘Come winter, the challenges will be very much greater and of course there is a risk that this could need national measures’.

The Government will want to avoid a second national lockdown at all costs after the economic damage caused by the first one.

Mr Johnson said on Friday he hoped there could be a ‘significant return to normality’ by November at the earliest and hopefully in time for Christmas.

At the same time, he said the Government had given local authorities new powers to close specific premises, shut outdoor spaces and cancel events.

Mr Johnson told the Sunday Telegraph: ‘It’s not just that we’re getting much better at spotting the disease and isolating it locally, but we understand far more which groups it affects, how it works, how it’s transmitted, so the possibility of different types of segmentation, of enhanced shielding for particular groups, is now there.

‘We’re genuinely able now to look at what’s happening in much closer to real time, to isolate outbreaks and to address them on the spot, and to work with local authorities to contain the problem locally and regionally if we have to.’

John Oliver Calls Out the Dirtiest Kind of Racism