Downing Street blamed the coronavirus pandemic for a lack of progress on reforming social care today – more than 18 months after Boris Johnson said he already had a ‘clear plan’ ready to solve the problem.

The Prime Minister and Chancellor Roshi Sunak were facing criticism today after help for the care sector was missing from the Budget yesterday.

Mr Sunak suggested a plan was still being worked on and No10 today admitted that little had happened in the past year on a promised reform to prevent pensioners being forced to sell their homes to afford care.

Successive governments have failed to address the situation which can both leave families facing ruinously expensive care costs while the system as a whole struggles for funding.

But when he took office in July 2019, Mr Johnson stood on the steps of No10 and suggested planning was at an advanced stage already.

Addressing the nation he said: ‘My job is to protect you or your parents or grandparents from the fear of having to sell your home to pay for the costs of care.

‘And so I am announcing now on the steps of Downing Street that we will fix the crisis in social care once and for all with a clear plan we have prepared. To give every older person the dignity and security they deserve.

‘That is the work that begins immediately behind that black door.’

Today Sir Andrew Dilnot, who led a review into the future of funding social care, said the lack of action on it was ‘a stain on our nation’. 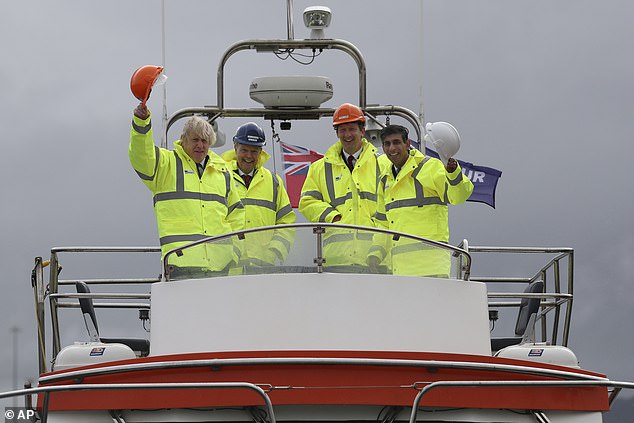 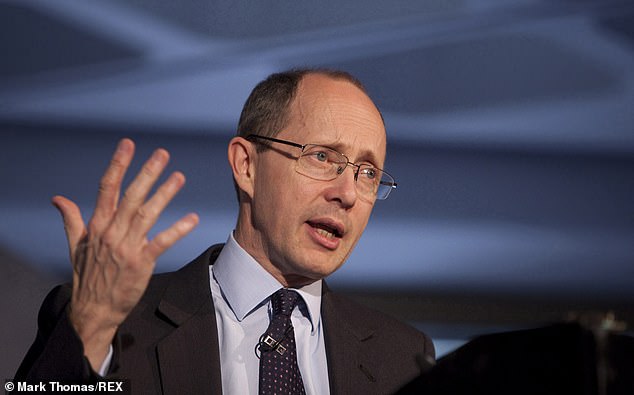 Sir Andrew Dilnot, who led a review into the future of funding social care, said the lack of action on it was ‘a stain on our nation’

Rishi Sunak was under pressure today to explain a £30billion cut in cash for the NHS hidden in his Budget.

Documents released alongside his fiscal showcase yesterday revealed there is a planned cut of £30 billion in day-to-day spending at the Department for Health and Social Care from April of this year, falling from £199.2 billion to £169.1 billion.

NHS England will see funding fall from £147.7 billion to £139.1 billion from next year, unless ministers commit to more funding for the health service.

It came as the head of the independent spending watchdog revealed that the Budget offered no cash past the end of the 2021-22 financial year to deal with the legacy of the pandemic.

Richard Hughes, chairman of the Office for Budget Responsibility (OBR) said the Government had provided ‘no explicit additional resources’ for things like catching up on all the operations that have been delayed, as well as an ongoing vaccination programme.

Labour leader Sir Keir Starmer lashed out at the cut in funding on a visit to a hospital in the Midlands today.

‘I think a lot of people will be pretty astonished to know that the day-to-day funding for the NHS is being cut in yesterday’s Budget, hidden in that Budget was that cut,’ he said while touring the Royal Derby Hospital, which he said was ‘still struggling with Covid cases’.

‘What’s coming next is the backlog of cases – 4.5 million people on waiting lists, understandably not been dealt with in the last year, so the NHS is going to have a really hard year and I think most people will be pretty astonished that the funding is being cut.

Sir Andrew said the broad outline of any plan would involve topping up the funding for council-delivered means-tested social care while creating ‘some form of social insurance’ for the population to ‘pool the risk’ should they need care later in life.

He predicted it would need between £7-10 billion extra per year to be put into social care.

Sir Andrew told BBC Radio 4’s World At One: ‘We know how to do this, we just need to get on and do it.

‘The Prime Minister not only said he would do it when he came to office but he said again in his conference speech in the autumn of last year that he would. The time is now absolutely ripe, so what I think we have to hope for is that in the Spending Review discussions over the summer, we get this done. It is a stain on our nation that we haven’t.’

The cost of residential care has risen dramatically and now stands at more than £33,000 a year.

Anyone with more than £23,250 in funds, including their house value, is denied state help, leaving thousands having to sell their homes to pay soaring care bills.

Mr Johnson’s press secretary Allegra Stratton blamed the pandemic and said it would be looked at again once the worst has passed.

Ms Strattton told reporters today that Matt Hancock has written to MPs in March 2020 asking for cross-party views on a plan to reform the system.

‘What has happened in the interim is the pandemic has clearly been difficult for care homes, care workers, and people in care homes up and down the country. That has been dominating all of our waking moments inside Government,’ she said.

‘As and when things calm down that process that the HS kicked off when he wrote to MPs he will have a chance to look at it again.’

Mr Johnson said the Government has already invested ‘huge quantities’ into health and social care throughout the coronavirus pandemic when asked what the sector’s workers had to do to get a pay rise or investment.

The Prime Minister, speaking to reporters on a visit to Teesport, Middlesbrough, said: ‘We have invested already in the health and social care sector in huge quantities throughout the pandemic.

‘And I think the whole country is massively grateful to healthcare workers and social care workers for what they have done.

‘About £52 billion went into the NHS just to help cope with the pandemic, £1.5 billion into social care, and £35 billion to support local councils in all sorts of ways.’

Wednesday’s Budget documents revealed that there is a planned cut of £30 billion in day-to-day spending from April of this year.

Pressed on why there was no pay rise for health and social care workers in the Budget, Mr Johnson said: ‘A lot of these are obviously in the private sector, the care home workers.

‘What we’ve done is had record increases in the living wage, and again the living wage will be going up, which will be supported by the Government, again in April. Our debt to those workers is massive.’

Shadow social care minister Liz Kendall said: ‘There was nothing in the Budget on social care, despite everything that has happened during this pandemic and the Prime Minister’s promise on the steps of Downing St to fix the crisis in social care more than 18 months ago.

‘Today the Chancellor claimed this gaping hole is because the Government is trying to build cross party consensus about the way forward. Yet this has not been discussed or even raised with Labour’s front bench team, despite our repeatedly asking the Care Minister about this issue.

‘Our society and economy need a care system that is fit for the future. Ministers must bring forward plans for reform as a matter of the utmost urgency and deliver on their promises to the British people.’

Grandmother with dementia found face-down and bleeding in the road

Rare 'hole in the sky' pictured over British town