Dozens of protestors attended an A-level results demonstration outside Downing Street calling for the immediate sacking of Gavin Williamson.

Students and teachers have demanded for the Education Secretary to be sacked at Friday’s protest over A-level and Btec results in England. 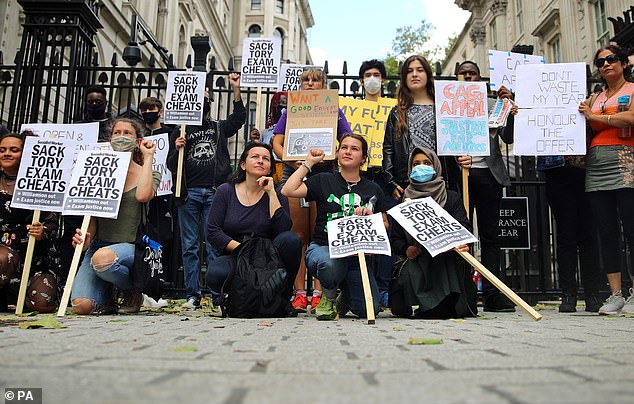 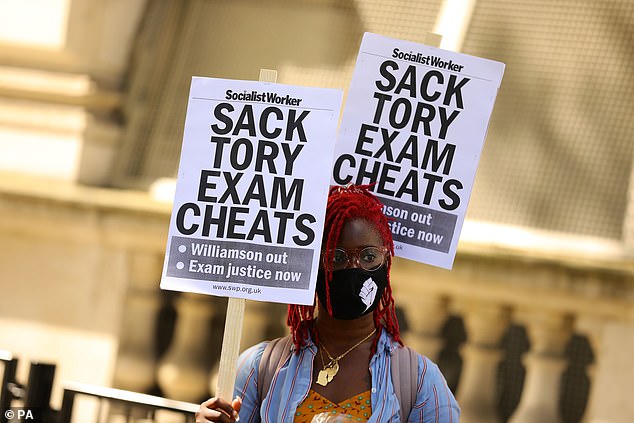 Protestors held Socialist Workers banners and chanted  slogans including ‘get Gav gone’ at the event, which was supported by some London branches of the National Education Union (NEU)

Glen Morgan-Shaw, 18, co-organised Friday’s demonstration outside Downing Street was amongst those calling for Gavin Williamson’s dismissal.

Glen, who is a Btec student from Bollingbrooke Academy in Wandsworth, south-west London, said: ‘Gavin Williamson has to go, it’s quite simple. He hasn’t got anything right, so why is he still in the position?

‘And we’re here for the working class kids on council estates who will continually be deemed less important and unworthy of university.’

Ofqual’s grading system saw many devastated students marks reduced to the point where they were turned down by their first choice universities.

But it saw almost 40 per cent of grades reduced from teachers’ predictions – devastating bright and dedicated pupils.

Following an outcry, the Government made a u-turn decision on Monday, announcing that students would be able to use their teacher-assessed grades. 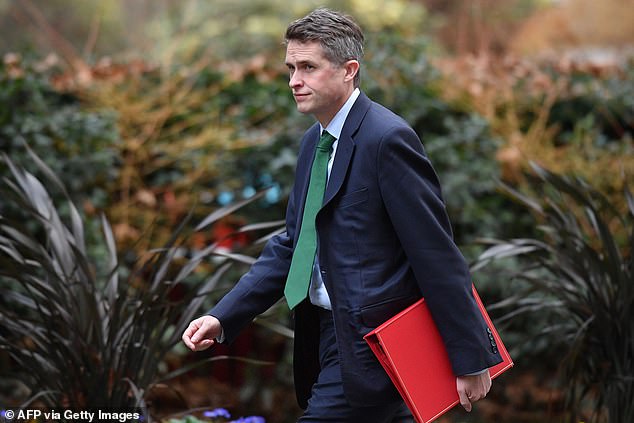 Mr Williamson apologised to pupils and parents affected by ‘significant inconsistencies’ with the grading process amid calls for him to resign or be sacked.

More than ten per cent of A-level students results have been upgraded to an A or higher after the algorithm was abandoned.

Thousands of students have been scrambling to get places at their first choice university after Education Secretary Gavin Williamson scrapped the algorithm system.

The government tried to ease pressure on universities by removing admission caps – but initially excluded medicine, dentistry and veterinary sciences.

Friday’s protest saw one aspiring medical student break down as she spoke of potentially missing out on university due to the grading system, which downgraded her from four A*s to four As.

Kaya Ilska, who took her A-levels at St Marks in Hounslow, west London, said her plans are now in ‘limbo’.

The 18-year-old said: ‘I’m now stuck in limbo. I want to study at University College London, but my plans are up in the air.

‘Does this Government not care about medical students?

‘It seems the system is weighted in favour of the privileged few who attend private school.’ 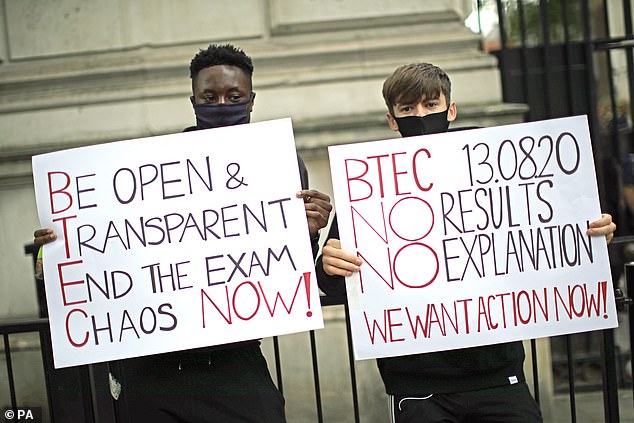 The Government abandoned Ofqual’s grading algorithm in a u-turn decision on Monday, allowing students to use teacher-assessed grades instead 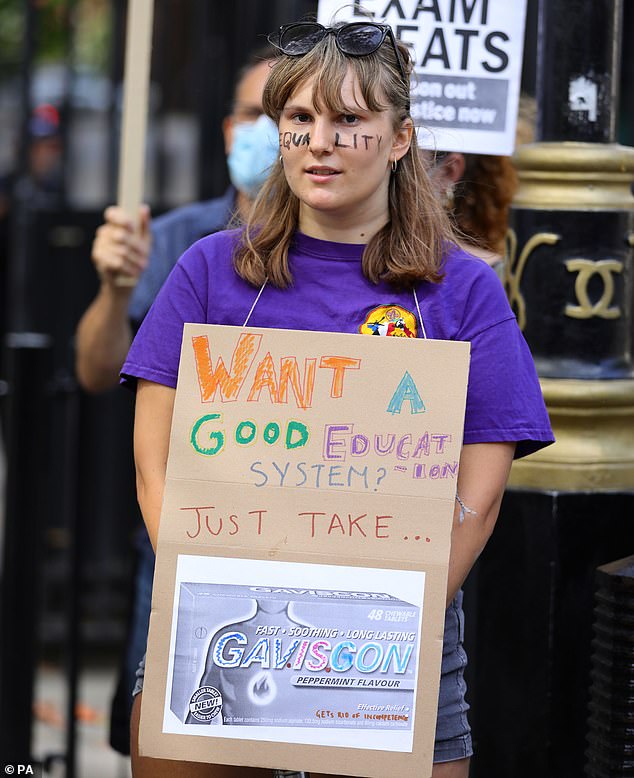 Yesterday, the Government agreed to lift the cap on medicine, dentistry, veterinary science and teaching courses following the U-turn decision.

The Department for Education (DfE) has also announced additional funding to increase capacity in medical, nursing, STEM and other high-cost subjects.

The Government confirmed that students who did receive sufficient grades will be able to take up their place at their chosen university.

If the school is full, students can be offered an alternative course or deferment to 2021 following the A-level results fiasco.

It also emerged yesterday that universities may prioritise the applications of those from ‘disadvantaged backgrounds’ – and encourage middle-class students to defer their places.

Asked about reports that disadvantaged pupils’ applications will be prioritised for the 2020/21 academic year, Clare Marchant told BBC Radio 4’s Today programme: ‘I think it is absolutely the right intention. I think we know from all of our survey work that those from most disadvantaged backgrounds really, really worry about money.

‘And so if they are deferred for a year, or asked to defer for a year, we’re likely to see a drop-off. And so that’s the real intent behind that.’ 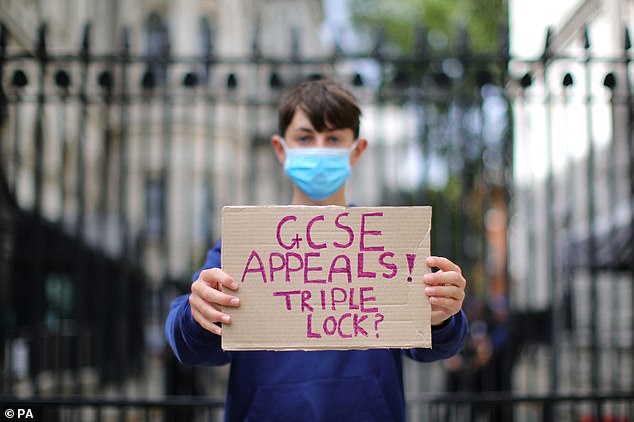 Thousands of students have been scrambling to get places at their first choice university this week, after Education Secretary Gavin Williamson scrapped the algorithm system 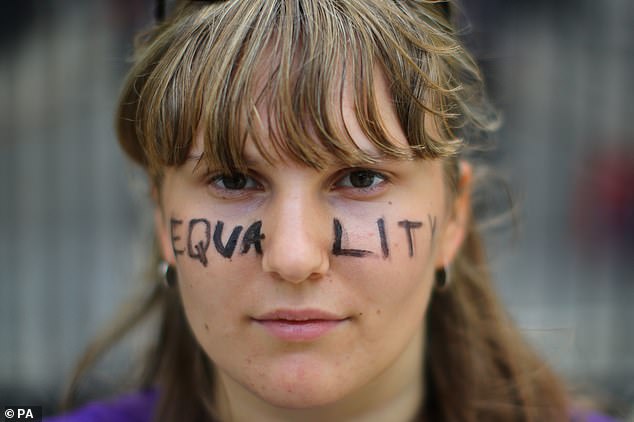 She added: ‘They won’t just be looking at that. They’ll be looking at a number of different things in terms of that individual student.’

This comes as an NEU petition calling for action to fix the exams system has reached 25,000 signatures in 24 hours.

The petition urged the Prime Minister to consider changing the content assessed in GCSE and A-level exams for next summer.

Mary Bousted, joint general secretary of the NEU, said: ‘This Government has no one but itself to blame. The weaknesses in a system of its own creation have been left horribly exposed.

‘What is needed is nothing short of an independent review into what went wrong, and a determination to ensure it never happens again.

‘That would be a big step towards regaining the trust of parents and the profession.’

‘Avengers: Infinity War’ Review – Race to See it, And Get Ready to Cry & Laugh