FROM zit-squeezing to lump removals, most of Dr Pimple Popper's patients are have pretty straightforward procedures.

But one of the dermatologist's latest treatments was up there with one of the most risky she's ever performed. 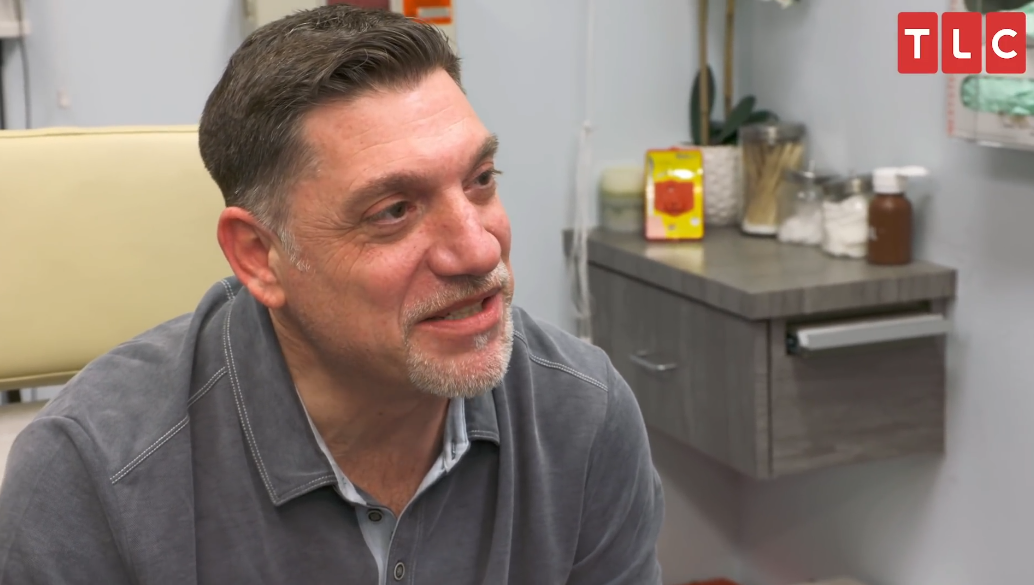 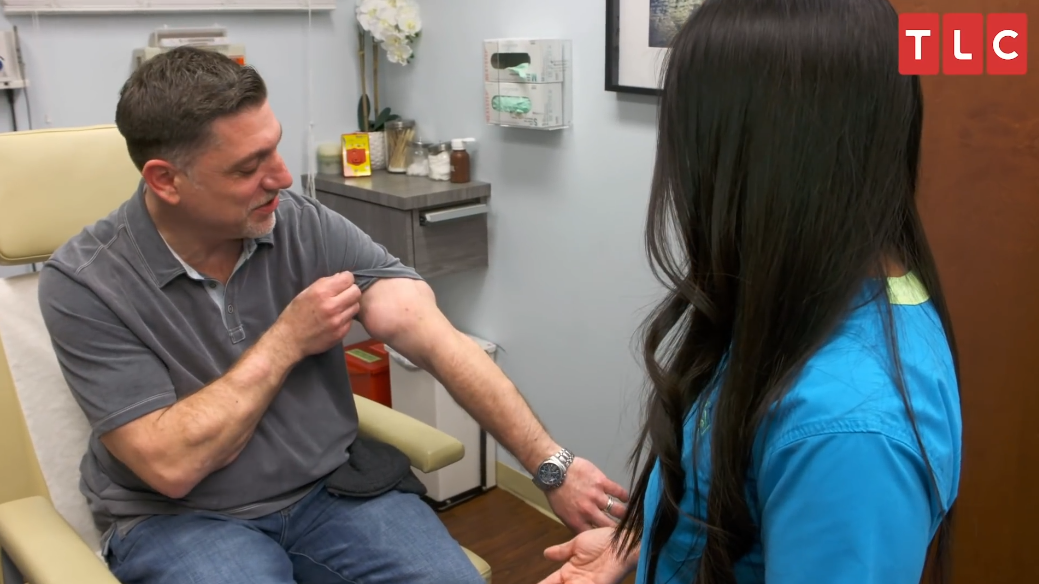 Gerard, from Brooklyn, New York, went to see the medic about the dozens of bumps covering his body.

The 46-year-old teacher explained that they started developing in his 20s and he now has too many to count.

Showing the doc his arms, she feels a particularly large one on his bicep, as he explains: "Those are the juicy ones."

"They get big, then they get a little smaller, but they never completely go away," he says.

Dr Pimple Popper, whose real name is Dr Sandra Lee, asks whether anyone else in his family has them and he says his sister does.

She then tells him he has a condition known as familial multiple lipomatosis, which causes benign growths of fatty tissue between the muscle and skin.

"A lot of the times I'll see people with this condition and they have hundreds of really small lipomas," Dr Lee explains to the camera.

"But in Gerard's case, he's got some big ones that are really distorting the shape of his body." 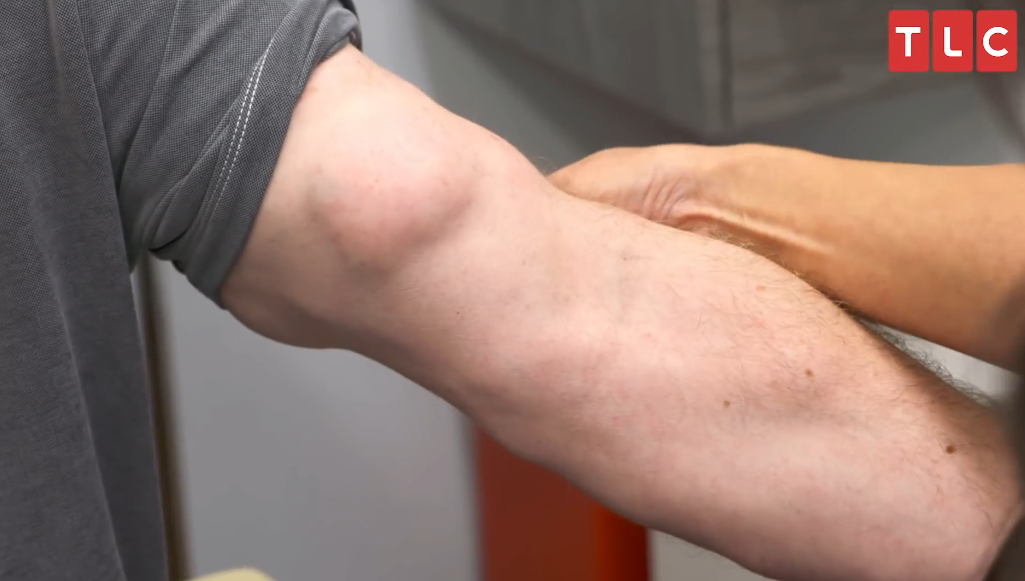 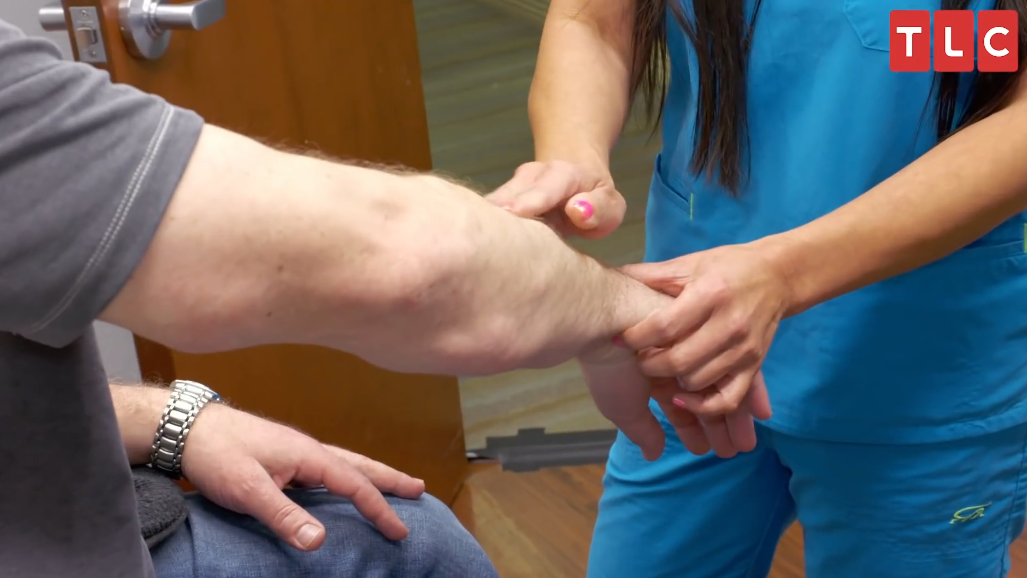 They can be removed with surgery but Gerard tells her he also suffers from a life-threatening hereditary disorder called V Leiden, which causes his blood to clot.

Initially Dr Lee says she is reluctant to carry out the surgery warning that it carries a risk of sudden death.

In the new episode of Dr Pimple Popper, due to air on TLC this week, she says: "I'm not really sure whether I feel comfortable doing this with you.

"I know you need my help but the risk you have from clots is that if they break off and get stuck in our lungs it blocks off the blood supply and that's a sudden death situation.

"You have a risk of a bigger harm than the average person."

Gerard explains that he has informed his doctor who had prescribed an anticoagulant to prevent clots from forming.

Dr Lee's mind was eased but she decided she would have to keep Gerard awake to keep his body active.

She also tells him that she won't be able to remove all of the lumps – which he estimates to be over 50.

Instead, she aims for around 10 lipomas that aren't near any important or large blood vessels were clots would be more likely to form.

What is familial multiple lipomatosis?

As the name suggests, it is diagnosed when multiple lipomatosis occurs in more than one family member, often over several generations.

The lipomas associated with this condition are usually painless, but may impact quality of life as they can be numerous and large.

Although the condition appears to be passed down through families in an autosomal dominant manner, the underlying genetic cause is currently unknown.

Treatment is based on the signs and symptoms present in each person.

Surgical excision may be necessary if the tumors interfere with movement and/or daily life.

To remove them she numbs the area and uses a scalpel to cut an opening down the centre of the lump.

Dr Lee kept checking to make sure Gerard was okay throughout the surgery and asked if he felt any warmth, swelling or pain – all signs of a clot.

She made sure the openings were small to minimise the risk of bleeding and used her fingers to scoop out the fatty lumps of tissue.

Eventually she was able to cut out 16 lipomas in total.

Gerard was disappointed that Dr Lee wasn't able to remove all of the lumps but did say he "felt like a new man".

Last month, we revealed a bumper compilation of some of the best clips from Dr Pimple Popper.

And by best, we mean the most disgusting – so, if the sight of a zit is enough to turn your stomach, then you may want to look away.

The pops that feature range from huge lipomas to pus explosions – and even a horn that looks like a pork scratching.

Dr Pimple Popper, aka Dr Sandra Lee, has almost six million subscribers on YouTube, so if you are in the 'I love pimple popping' camp, then you're definitely not alone.

The California-based dermatologist has previously spoken about why she thinks people are so fascinated by what she does.

She told Refinery29: “I think watching popping is similar to seeing a scary movie or riding a roller coaster for some.

"You get a rush of euphoria and excitement.”

Drawings from UK pupils are placed inside food parcels for Ukraine