A drug-taking German nightclub bouncer was today convicted of murdering a British heiress in a luxury Swiss hotel in what he claimed was a sex game that went wrong.

Marc Schatzle, 32, told a judge that Anna Reed, 22, daughter of a wealthy horse breeder from Yorkshire, suffocated as the pair were having rough sex in the bathroom of their plush hotel in Locano in the early hours of April 9, 2019.

But Schatzle’s story was rejected by a judge Friday who said that the tattooed bodybuilder and father-of-two had deliberately strangled the millionaire’s daughter with a towel to pay off his debts, before sentencing him to 18 years in prison.

Prosecutor Petra Canonica Alexakis earlier told the court how penniless Schatzle stole Anna’s credit card and hid it in a ceiling panel in the hotel lift only to be discovered five months after her death.

Anna Reed (pictured with defendant Marc Schatzle before her death), 22, was found dead in her hotel room  in Switzerland, in April 2019 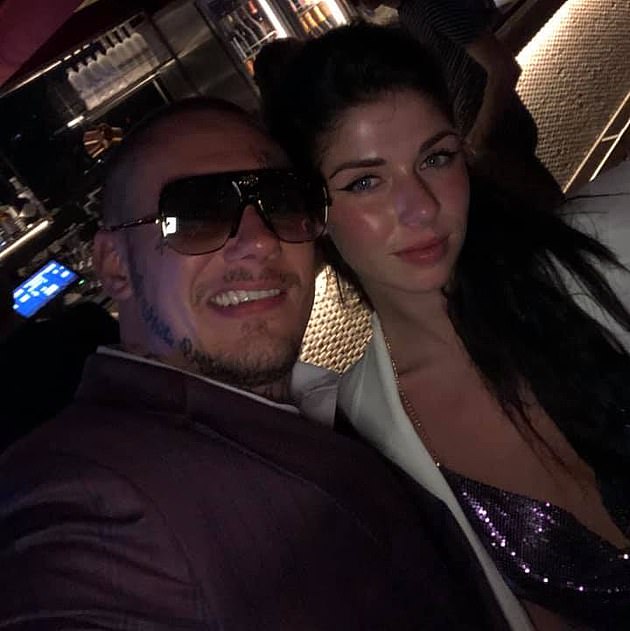 Marc Schatzle, who has denied deliberately killing Anna, is believed to have met her in Thailand in February 2019

During their three-month relationship, Anna splashed out almost £50,000 on Schatzle.

The prosecutor said: ‘Marc Schatzle liked the good life, the holidays and all the trappings, but he alone couldn’t afford it.

‘After he met Anna, his life had an upgrade. She was ideal for him – beautiful, charming and, crucially, rich. He killed her for a financial motive because the night she died they had argued and she threatened to leave him.’

According to a psychiatric report, Schatzle suffers a narcissistic personality disorder, taking childish pleasure in appearing important and pleasant.

‘The relationships he builds are opportunistic,’ the prosecutor stated.

Just days before her death, Anna informed him she had received £30,000 from a relative. In stark contrast, Schatzle’s bank had blocked his credit card and he had the equivalent of just £163.41 in his pocket.

Schatzle was born in Jestetten in Baden-Württemberg, south west Germany.

Thick-set with a shaven-head, he has menacing facial tattoos and his knuckles bear the initials FTW (F*** The World).

Arrogant and selfish, he slept with hundreds of women over the years, and had previous convictions.

In 2018 he received an eight-month suspended sentence for assaulting a 17-year-old boy, while three years prior he was jailed for six months for theft and was also ordered to attend drug rehabilitation therapy.

On social media he used the handle ‘Marc Dirtywhite’. Dirty White is the street slang for raw cocaine.

The Dirty White Boys are also a white supremacist group.

Schatzle most recently worked as a nightclub bouncer and lived in the Swiss city of Zurich.

It was here that he met his ex-partner Michele Bochsler, the mother of his two children.

Despite abandoning them and failing to pay child maintenance, she has stood by him. She said that she believed ‘one thousand percent’ that he did not murder Anna.

Speaking from her home that she once shared with Schätzle, she said: ‘He never ever has been violent. Never ever. It’s just not possible.

‘In German we have the expression ‘I would put my hand in the fire for that’. I use this expression because I am so sure that he is innocent. It was an accident, it must have been. 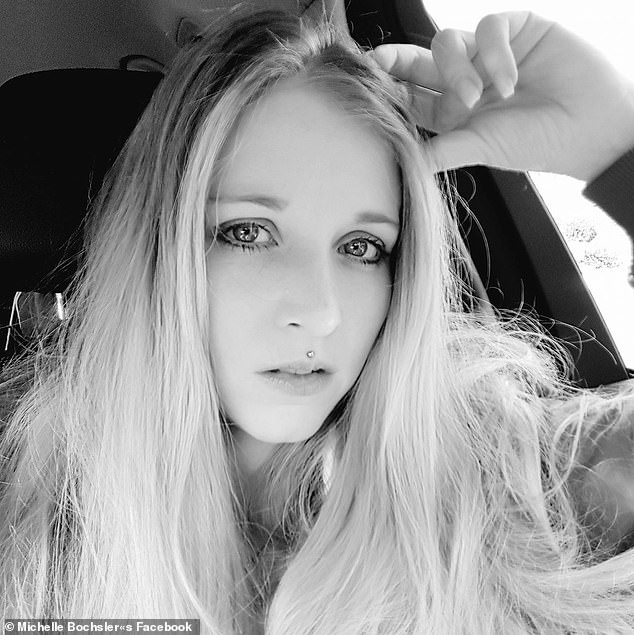 Michele Bochsler, the mother of the bouncer’s two children and ex-partner, has stood by him despite his refusal to pay child maintenance. She said that she believed ‘one thousand percent’ that he did not murder Anna. Speaking from her home that she once shared with Schatzle, she said: ‘He never ever has been violent. Never ever. It’s just not possible. 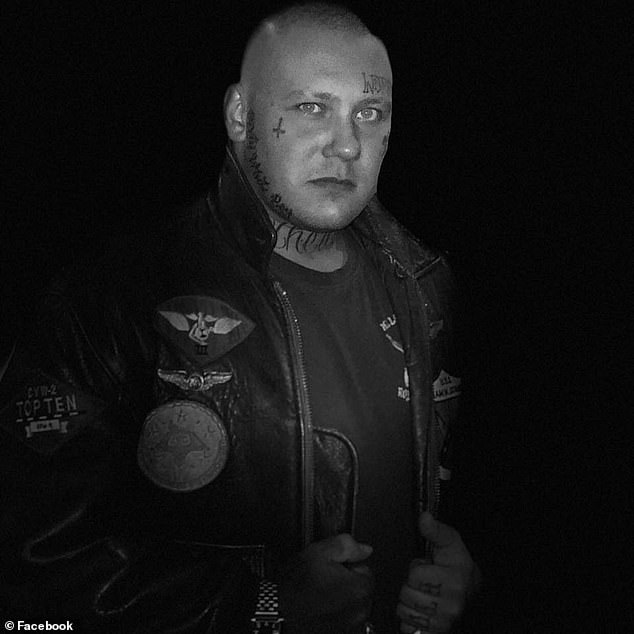 Schatzle was a hopeless businessman. A recruitment business he set up in 2017 clocked up large debts resulting in him being declared bankrupt.

He lived off the £4000-a-month income he received from a disability pension that he had been drawing since a road traffic accident in 2016.

He splashed out on drugs and designer clothes and accumulated debts of £40,000.

Privately-educated Anna could not have come from a more different background.

She and her sister Millie were raised in Harrogate and attended £10,000-a-year Ashville College.

The Reed family is well known in the area. They run the 300-acre Copgrove Hall Stud, founded by Anna’s great uncle, Guy Reed, a prominent owner and breeder of racehorses.

Anna herself was an accomplished horsewoman and her father Clive is a trustee of the stud. The family also owns property in Monaco.

Her mother Mary, estranged from Clive, died after falling down stairs having suffered an aneurysm. She was just 49.

Anna was left devastated and, as one friend said, ‘she went off the rails’.

Poignantly, a crumpled photograph of Mary was found under the bed in the hotel room where she died.

The judge, Mauro Ermani, questioned Schatzle, demanding to know how the precious photograph came to be there and why it was crumpled.

The accused, wearing a military-style blazer with huge epaulettes, shrugged his shoulders and said: ‘I can’t answer things I don’t know.’

Petite Anna, described by friends as ‘bright, beautiful and bubbly’, was on a year-out – funded by her wealthy father – before settling down to study maths.

She met Schatzle in Thailand just three months before her death.

Sex and cocaine flowed freely in their relationship, and, the defendant quipped in court, so did alcohol on account of her being British.

‘She liked sex clubs like the KitKat in Berlin. She also liked to drink – she was British,’ he said.

MailOnline can reveal Anna lived a party-girl lifestyle in Berlin, where she moved two years after her mother’s death.

Adopting the pseudonym Berlin Baby, Anna embarked on a wild lifestyle of all-night parties and high-living, while working as a model.

She was a regular at Soho House, the corner stone of Berlin’s creative hub and the KitKatClub in the city’s bohemian Kreuzberg.

Among Anna’s friends from her life in Berlin is Tine Kruemel, who works at as a ‘Candy girl’ at the KitKatClub.

Miss Kruemel declined to talk about Anna when MailOnline approached her at the club.

She said: ‘I am having to work now, I do not have time to talk about Anna.’

Mr Lange, who was in a relationship with Anna for more than two years, said: ‘Anna loved to party. She loved going to night clubs and parties. She was great fun to be around.’

After meeting Schatzle in Asia, Anna spent time with him in Berlin before the fateful trip to Lake Maggiore.

They checked into La Palma au Lac in Locarno, a 68-room four-star hotel, and paid a premium to secure Room 501, a Junior Suite on the top floor.

The day before Anna died, the pair went to see an apartment to rent in Ascona.

Schatzle claimed they were so in love they were already making plans to move in together.

After a night out, they returned to the hotel at around 2.30am.

Other guests heard the couple arguing, glass was smashed, the phone was ripped from the socket and the word ‘money’ was clearly heard before Anna yelled: ‘You’re killing me’ or ‘You’re kidding me’.

It was never determined which of these she screamed.

According to the prosecution, Anna was dead before 4am. But it was not until 6am that Schatzle frantically emerged from the room to alert staff.

He said: ‘I rushed out of the room, I took the elevator to reception because I needed help.

‘When I had taken the towel away I had noticed a small red streak on her throat.’

Anna’s heartbroken father Clive travelled to Switzerland in the days following her death to identify her body.

Her family did not attend the gruelling trial in person.

In an impact statement, Anna’s father and sister said: ‘Anna would light up a room when she walked in and she loved dancing, she loved her friends and she would always take care of them.

‘They knew they could count on her and she was very generous.

‘Anna was also very sporty. She loved horses, swimming and skiing, she was even learning to be a ski instructor. She was a very spontaneous and sociable person.

‘When she died it was her last summer of freedom before getting back to reality as she was going to go to university to study mathematics.’

The Trailer For Season 12 of Anthony Bourdain: Parts Unknown Is Heartbreaking to Watch

Just do it: Swapping Cisco for tech startup pays off for O’Sullivan