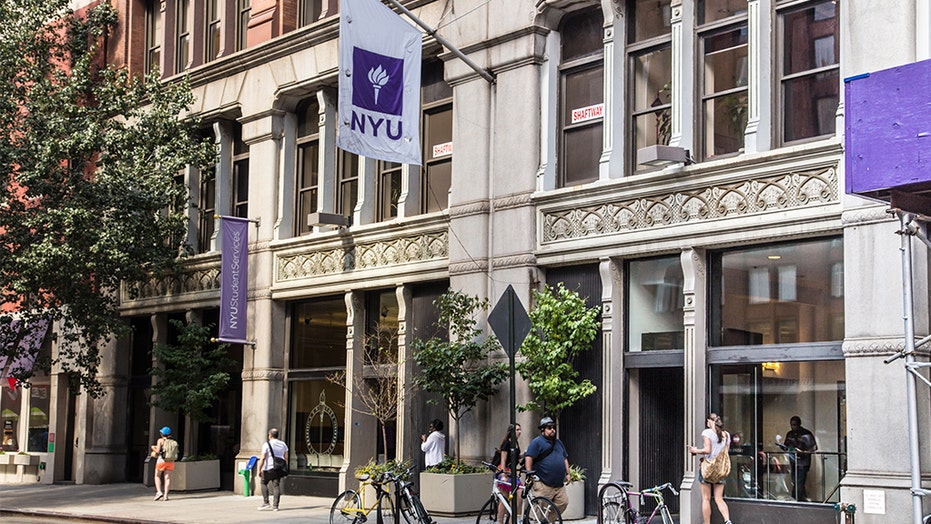 Lawyers who filed charges of anti-Semitism and a hostile environment for Jewish students at New York University were notified on Wednesday that the Department of Education had opened a full-scale investigation into their allegations.

In a letter sent to the attorneys, the Department of Education said its Office for Civil Rights (OCR) will investigate “whether, as a result of incidents that occurred at the university, a hostile environment existed for Jewish students on the university campus and, if so, whether the University responded appropriately.” 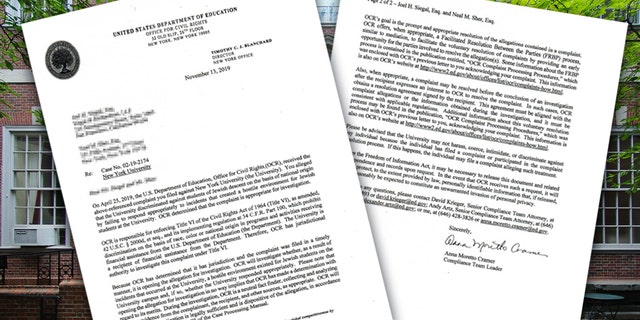 A letter sent to the attorneys who filed a complaint against NYU.
(Attorney Neal Sher)

“It’s very positive and very encouraging because the issues that are raised are very serious, they’re pervasive and widespread,” attorney Neal Sher, who filed the seven-page complaint in April on behalf of his client, former NYU student Adela Cojab, told Fox News.

Sher said Students for Justice in Palestine (SJP), a pro-Palestinian student group at many colleges, is the “centerpiece” of the complaint.

The complaint sent to the Department of Education said, “SJP is a radical organization affiliated with terror groups, bent on adopting a policy of anti-normalization of Jewish groups, and on isolating, demonizing and ultimately destroying the Jewish state.”

It also said that the SJP network “serves as the leading student arm of the Boycott, Divestment and Sanctions (BDS) movement in the United States.”

Cojab, who was the president of an Israel advocacy group at NYU and was a representative for Jewish students in student government, graduated in May and filed the complaint one month before. 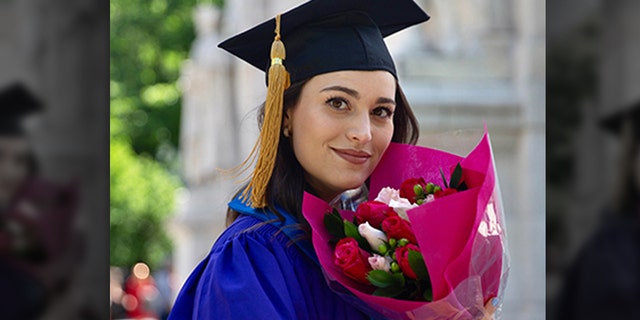 Adela Cojab, who was the president of an Israel advocacy group at NYU and was a representative for Jewish students on student government, graduated from the university in May and filed the complaint one month before.
(Adela Cojab)

“The reason why I filed this complaint is so that no student has to go through what I went through,” Cojab told Fox News on Thursday.

She said she spoke with the senior compliance team attorney/mediator for the Education Department's civil rights office in June and outlined her experiences with NYU administrators and SJP.

Cojab said that in the spring of 2018, out of about 360 clubs at NYU, 53 signed on to boycott two groups on campus that support Israel.

“Coupled with an anti-Israel resolution and a threatening flier and a week’s worth of protesting, Jewish students felt they could not publicly display their Jewish identity for fear of violent action at the hands of their peers,” she said.

Cojab told Fox News: “It was breaking my heart and I immediately went to the administration from the very time SJP put Zionism in the same equivalent as Nazism. I told the administration that SJP was creating an unsafe environment where students felt they were being threatened and targeted. The administration essentially told me that they were supportive of the Jewish community, but no concrete actions would be taken against SJP.”

“The administration was very much aware of the situation on the ground where Jewish students felt unsafe,” she added.

Cojab said in April 2018, during an Israel celebration in Washington Square Park, “you had an NYU student light an Israeli flag on fire. He was arrested by NYPD.”

Later on, during the singing of Hatikvah, which is Israel’s national anthem, another student made his way toward the stage and grabbed the arm of a female student who had the microphone. He was arrested for physical assault, Cojab told Fox News.

Fox News’ contacted The New York City Police Department for confirmation that the two had been arrested, but did not receive an immediate reply.

Cojab said she then went to NYU administrators telling them they could have taken steps to prevent the alleged assault from happening. “At that point the threat was no longer perceived, it was real,” she said.

She went on to say, “I sent a letter to NYU demanding SJP is disciplined for their actions because students should not walk in fear of being assaulted and SJP was promoting violent actions.”

“Instead of disciplining the group as a whole, NYU disciplined the two individual students. NYU told me not to post on social media and to lower my own presence and the presence of my community instead of addressing a group that has consistently harassed a minority population,” Cojab told Fox News. 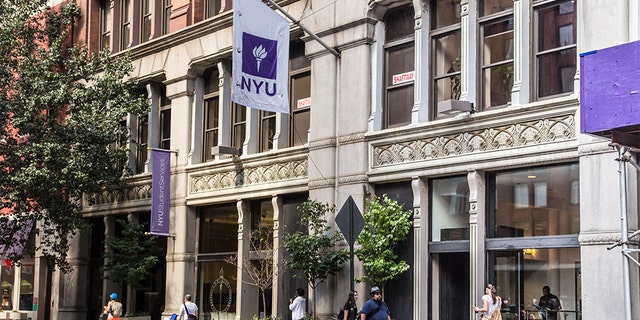 She said less than a year after the alleged assault, NYU awarded SJP the university’s President’s Service Award, “essentially stating that SJP’s actions are exemplary.”  The award is given to “recognize students and student organizations that have positively impacted the NYU community.”

Cojab said after that happened she had no choice but to take legal action because “it was clear the administration did not understand the gravity of SJP’s actions.”

“Here you have a clear instance of a minority community that shares ancestry being targeted and discriminated against with violent acts committed at their national celebration while singing their national anthem and their flag was burned. The administration did not take steps to prevent the discriminatory attacks nor did they address the aggrieved community to prevent its reoccurrence. Instead, they honored their actions with an award,” she said.

Sher told Fox News the complaint was filed with the objective of getting the education department to open a full-fledged investigation on NYU.

“SJP is national. There is a real possibility that action taken by the government in this case could actually have nationwide impact,” Sher, who was the head of the Nazi war crimes prosecution office in the U.S. Department of Justice for 15 years, told Fox News. “There could be a ripple effect on campuses all over.”

Sher went on to say, “If I were a university administrator in this country, I would pay very close attention to this case because it is clear that the Education Department is taking very seriously all of these charges.”

The complaint noted that as of 2017 there were 189 SJP chapters on U.S. campuses, citing a map issued by NSJP.

National Students for Justice in Palestine (NSJP) and NYU did not immediately respond to Fox News’ request for comment.

However, in a statement sent to Fox News, NYU’s SJP chapter said, “NYU Students for Justice in Palestine and NYU Jewish Voice for Peace believe Palestinian liberation and Jewish liberation go hand in hand. We work tirelessly against anti-racism, Islamophobia and anti-Semitism. The fact that around half of SJP is Jewish, along with our interfaith work where an Israeli Jewish woman and a Palestinian Muslim woman crafted a BDS resolution on human rights, is evidence of just that.”

Sher said the Department of Education is currently conducting its investigation and there is no indication as to how long that would take.

A report released last month made the case that NSJP, “is a main driver of Jew-hatred on campus,” citing dozens of examples of alleged anti-Semitism involving the group’s members, including on NYU’s campus.

The Institute for the Study of Global Antisemitism and Police (ISGAP) released the 96-page report, titled “National Students for Justice in Palestine (NSJP) and the Promotion of Hate and Anti-Semitism on the University Campus: The Threat to Academic Freedom” and according to the authors of the report, NSJP has promoted anti-Semitic rhetoric and has been associated with “violence and terror ideologically and politically.” 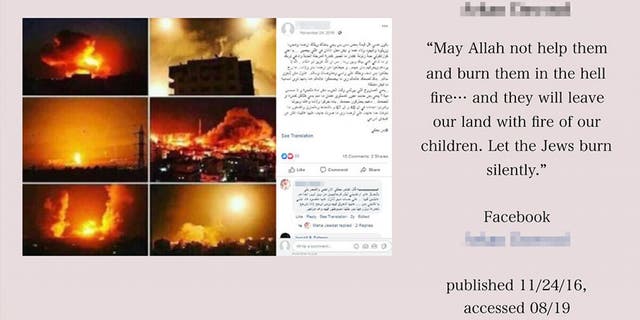 NYU and NSJP did not immediately respond to Fox News’ request for comment on that report either.