Eight men accused of gang-raping a pregnant goat with such brutality that it later died from its injuries, are being hunted by police in Nuh, northern India.

The men reportedly stole the goat in a village outside Nuh, some 45 miles south of New Delhi on Wednesday, beat the animal and took turns in sexually assaulting it.

The owner of the goat claims he caught the men in the act and together with some of his neighbours, was able to restrain and ‘thrash’ three of the alleged culprits before they fled. 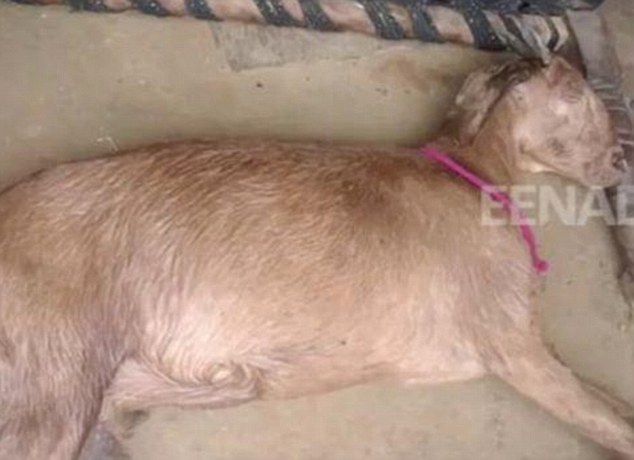 Shocking: The pregnant goat, pictured after it died, was allegedly assaulted and gang-raped by eight men in a village outside Nuh, northern India

Aslup Khan, a 27-year-old truck driver, told local media that he and the other villagers had gone looking for his goat after noticing it missing, and found the men raping the animal.

‘My goat was injured and lying on the ground. It was not even able to walk,’ he told Hindustan Times.

‘I took it home and applied medicines on the wounds on its head and nose. It did not eat anything the next day and was lying as if it was paralysed.’

He told the news website that one of the alleged attackers had come to visit him while he was caring for his dying animal. 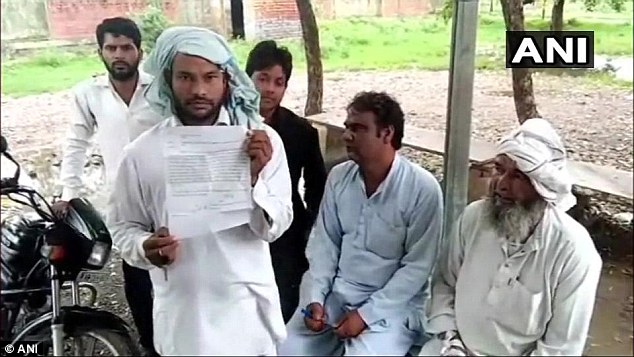 Upset: Owner Aslup Khan, seen holding up his police complaint, claims he was visited by one of the attackers as the goat lay dying, and says he told him he ‘had a nice time’ with the goat

‘He laughed and said that he and his friends had a nice time that night, which made me furious.’

Mr Khan said he lashed out at the man, who fled his home. When the goat died a few hours later, Mr Khan filed a police complaint.

A veterinarian examined the goat and found that the animal had died of a brain hemorrhage and had blood in her windpipe.

Local police said they had high hopes of locating the culprits.

Doctor Who's K9 could reappear in a new series, as producers promise a "major" new project