A Salvadoran woman serving a 30-year prison sentence after having a ‘stillbirth’ is released after 10 years behind bars. 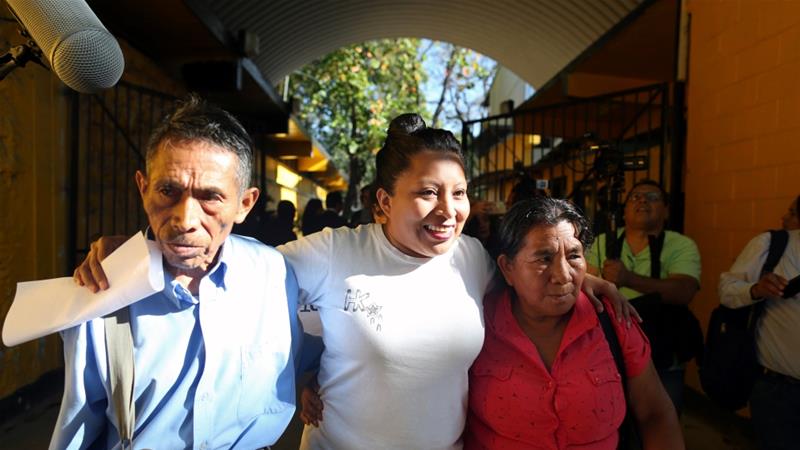 A woman in El Salvador serving a 30-year prison term for allegedly aborting her child has been released after the country’s Supreme Court reduced her sentence.

Teodora del Carmen Vasquez was convicted in 2008 of aggravated homicide, after being charged under a strict abortion law prohibiting abortion or miscarriages.

Carmen Vasquez, her lawyers and human rights groups always maintained she had given birth to a stillborn baby girl after suffering health complications.

She spent more than 10 years in prison.

“My effort has been worth it and now I’m very happy to go back to my family again,” she said after leaving prison on Thursday, surrounded by relatives and activists.

Amnesty International called her release a positive step but stressed that Carmen Vasquez’ case should serve as an example and eventually end a ban that has resulted in the imprisonment of dozens of women.

“It’s encouraging to see Teodora stepping out of jail, where she should have never been in the first place, but El Salvador is still far from fully ensuring the rights of women and girls in the country,” said Erika Guevara-Rosas, Amnesty’s Americas director.

Carmen Vasquez’s sentence was reportedly commuted by the Supreme Court and the justice ministry, but prosecutors maintain she strangled her baby.

“She is still guilty for the system, but she can be released due to a legal process we interposed, and at the same time an appeal against the 30 years sentence is in process,” said Katia Recinos, who works with the pro-choice group Citizens Association for the Decriminalization of Abortion.

“In March, we expect Maya Veronica, another woman jailed for abortion, to be released through the same legal process,” Recinos told Al Jazeera.

According to Amnesty, Carmen Vasquez’s lawyers will seek compensation and redress for the time she spent behind bars.

El Salvador is one of only five countries where abortion is criminalised in all cases.

Under the law, which was implemented in 1998, women can be charged with murder and other related charges for an abortion or suspected abortion carried out for any reason.

Additionally, medical professionals can face prosecution for not reporting a suspected abortion.

If convicted of abortion, a woman faces two to eight years in prison. Those convicted of homicide are facing sentences of to up to 50 years.

‘No word from LYN!’: The extraordinary diary that helped convict Lynette Dawson’s killer

7 ways to thrive under home-based learning

National Guard on lookout for IEDs with culprit behind RNC, DNC bombs still on the loose