Astonishing footage has captured the moment an elephant seal gave birth on an Argentine beach.

It quickly becomes apparent in the video that the mother is experiencing contractions as she writhes on the pebble beach in the Valdes Peninsula.

As her nostrils flare and her eyes open and close, the pup fully emerges in under two minutes.

The black pup can be seen tentatively wriggling around while the mother turns and yelps at her newborn, before the two lie side by side on the pebbly beach. 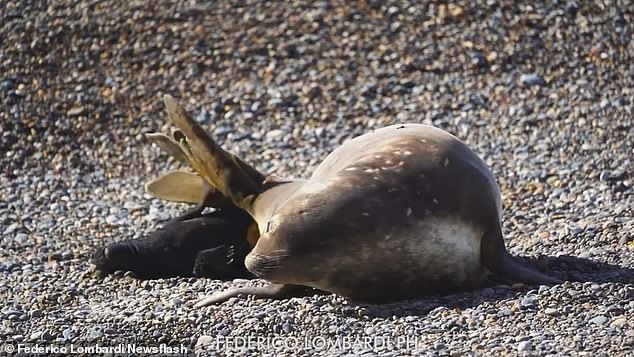 The stunning footage was captured by dentist and photographer Federico Lombardi, 52, who posted it on his Instagram page on September 29.

Mr Lombardi said: ‘I live some 1,300 kilometres (808 miles) from the Valdes Peninsula, the UNESCO World Heritage Site where the event took place.

‘I go there three or four times a year to take photos and film different animal species that, depending on the time of year, are found in different areas of the peninsula.’ 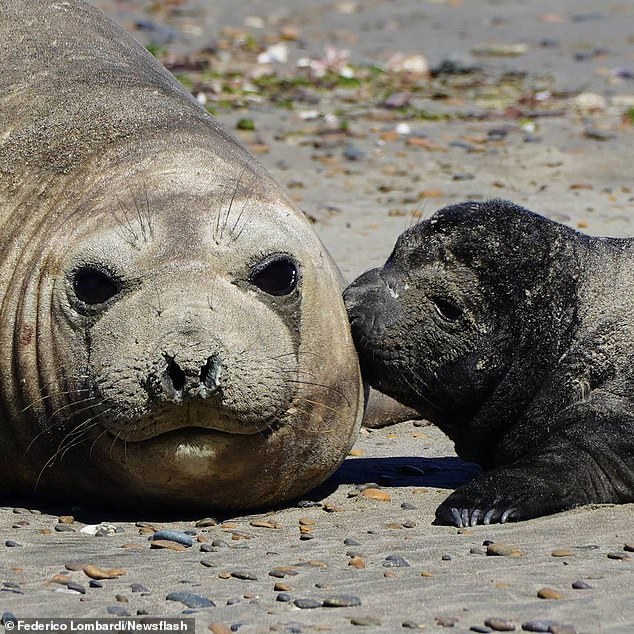 Mr Lombardi filmed the clip in a protected area of the peninsula in the province of Chubut on September 20.

He said: ‘It’s not somewhere the general public can access.’

Mr Lombardi was some 50 metres (164 feet) from a group of elephant seals when he and his government minder spotted a female about to give birth.

‘I quickly assembled my equipment and decided to film and not take photos. I wasn’t really aware of what I filmed until I saw it a few hours later. I couldn’t believe it!’

According to Mr Lombardi, female elephant seals give birth in September after a year-long pregnancy period.

The pup is born weighing approximately 40 kilogrammes (88 lbs) and becomes independent from its mother after 25 days.

Mr Lombardi said: ‘The males arrive in late August weighing four tonnes, and after two months of intense activity (copulation, fights, etc.), they return to the sea having lost half their body weight. 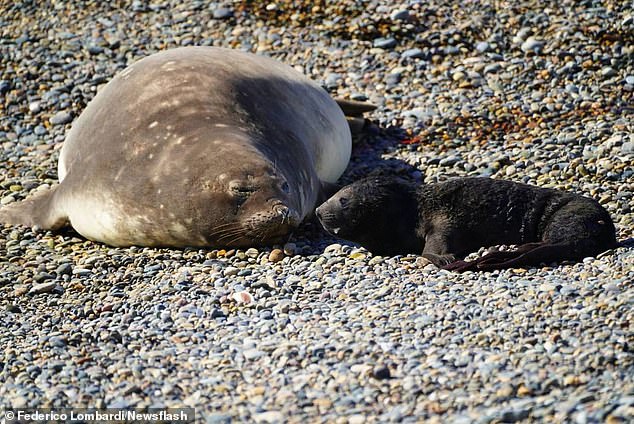 The stunning footage was captured by dentist and photographer Federico Lombardi, 52

‘In the Valdes Peninsula there are approximately 30,000 elephant seals during this period, which is mating season.’

Elephant seals (Mirounga) were hunted to the brink of extinction by the end of the 19th century, but their numbers have since recovered.

There are two species of elephant seals, the northern and southern.

Northern elephant seals (Mirounga angustirostris) can be found in California and Baja California, though they prefer to frequent offshore islands rather than the North American mainland.

Southern elephants are the largest of all seals. Males can be over 20 feet long and weigh up to 8,800 pounds. But these massive pinnipeds aren’t called elephant seals because of their size. They take their name from their trunklike inflatable snouts.

When breeding season arrives, male elephant seals define and defend territories. They collect a harem of 40 to 50 females, which are much smaller than their enormous mates. Males battle each other for mating dominance. Some encounters end with roaring and aggressive posturing, but many others turn into violent and bloody battles.

Sea elephants, as these seals are sometimes called, give birth in late winter to a single pup and nurse it for approximately a month. While suckling their young, females do not eat—both mother and child live off the energy stored in ample reserves of her blubber. Females give birth to a single pup each year after an 11-month pregnancy.

Elephant seals migrate in search of food, spending months at sea and often diving deep to forage. They return to their rookeries in winter to breed and give birth. Though both male and female elephant seals spend time at sea, their migration routes and feeding habits differ: Males follow a more consistent route while females vary their routes in pursuit of moving prey.

Elephant seals were aggressively hunted for their oil, and their numbers were once reduced to the brink of extinction. Fortunately, populations have rebounded under legal protections.