A third day of jury deliberations ended Thursday with no verdict in a criminal fraud trial against Theranos founder Elizabeth Holmes, who was once lauded one of Silicon Valley’s most promising entrepreneurs.

Deliberations are scheduled to resume Monday in the closely watched trial that began more than three months ago and could land Holmes in prison for 20 years if she's convicted.

Holmes, 37, awaits her fate on 11 counts of criminal fraud and conspiracy first claimed in contained in a superseding indictment, claiming she used her now defunct blood-testing company, Theranos, to defraud investors and customers. The biotech founder, first indicted in 2018, led the startup for approximately 15 years before it collapsed after a Wall Street Journal investigation exposed that Theranos could not conduct an array of blood tests from a finger prick of blood as Holmes had suggested.

On Thursday, jurors asked to listen to clips of a 2013 call Holmes had with investors that was secretly recorded by John Bryan Tolbert of HALL Group. The call was held shortly after Theranos rolled out its blood-testing services in Arizona and California Walgreens stores.

Twice during one call Holmes makes statements about Theranos’ engagement with the U.S. military, which prosecutors focused on during the trial.

“When I started the company, we knew that it would take us a long time to be able to establish infrastructure that could do any lab test that is run in a traditional lab from a micro-sample or these tiny droplets that we take now from the finger," Holmes said on the call. "We thus built the business around our partnerships with pharmaceutical companies and our contracts with the military, wherein we could deploy our framework, in the one case for helping to accelerate clinical trials, and in the other for extreme use case situations in trauma and other areas."

Asked later during the call if there was a military aspect that she’s going to pursue, Holmes said, “The military is a big deal for us.” 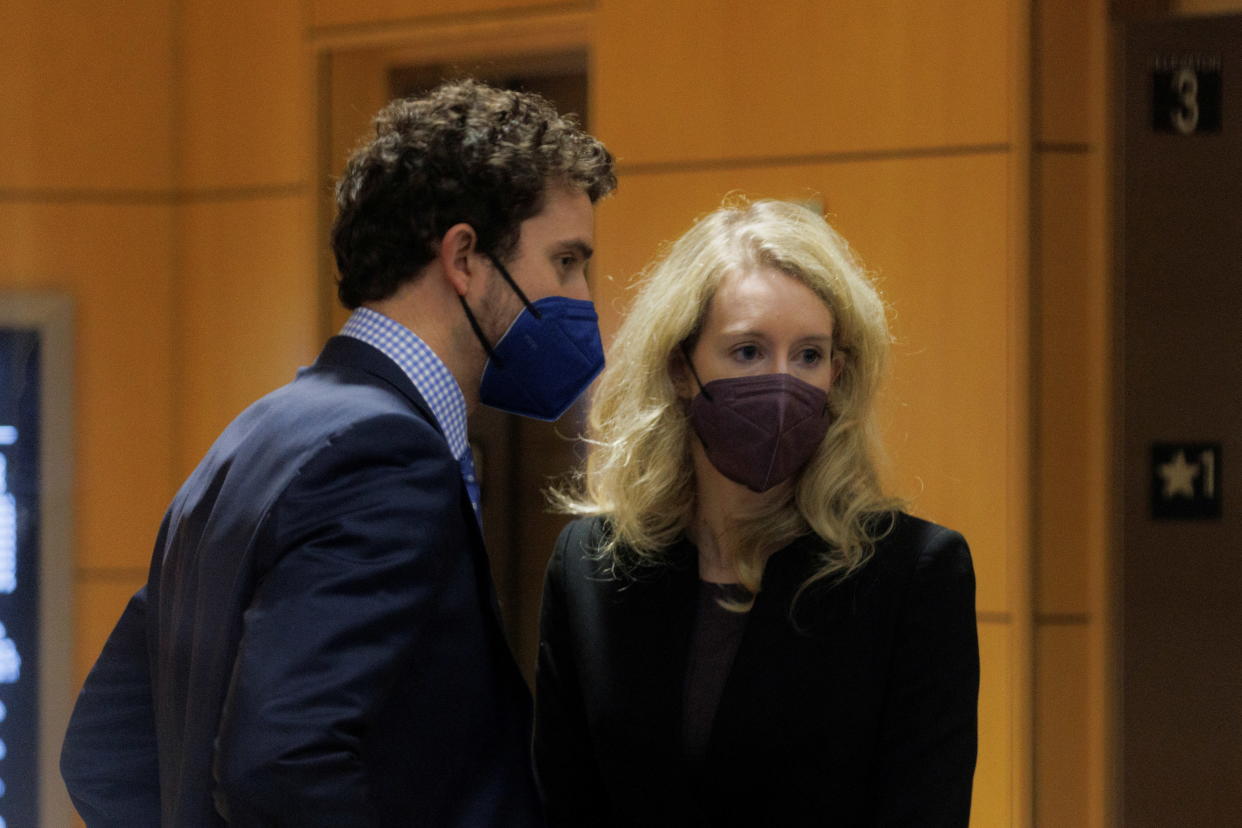 She added that confidentially, she could tell the investors about “a couple of the areas” where Theranos had focused. In the context of the Middle East and Afghanistan, Holmes said, the survival rate of men and women who are hit with fire was 98% if they received immediate treatment.

“The ability to take a technology like this, specifically in flight,” such as on a medivac helicopter, she explained, makes it possible to begin transfusion and stabilization early. Holmes went on to say Theranos had been doing a lot of work with U.S. Special Operations Command, and with the military to test the technology in remote areas.

Importantly during the call, Holmes also characterized the military applications as business unit, separate from its retail and pharmaceutical aspirations, that Theranos had not yet fully developed — a legally significant distinction that could help Holmes' case if jurors believe the statement negates the testimony of multiple investors who said Holmes led them to believe that Theranos had already entered into viable contracts with the military.

Prosecutors say that Holmes lied to investors about the extent of her involvement with the military, a point her lawyer, Kevin Downey rebutted during closing arguments this week.

Downey pointed to a contract for a study on Theranos' device that the company entered into with U.S. Central Command, as well as U.S. Special Operations Command, and U.S. Africa Command.

Additional statements from Holmes captured on Tolbert's secretly recorded call, included discussion about Theranos' increasing stock price, the reliability of its technology, as well as its fundamental aspirations.

“Several years ago we realized that we had created an infrastructure that could in fact make it possible to get rid of phlebotomy…in its entirety,” Holmes told investors about her goal to run hundreds of tests from a few drops of blood. “And because the sample is fresh and it’s not, you know, a big series of tubes of blood that are sitting on a counter, and exposed to temperatures, we don’t suffer the rates of decay of key analytes that happen when you ship samples off to a central lab.”

Former Theranos COO Sunny Balwani, also Holmes' onetime boyfriend, was indicted on the same charges and is scheduled for trial next year. Each of two conspiracy charges separately alleged that between roughly 2010 and 2015, Holmes conspired with Balwani to defraud investors and patients.

Judge Edward Davila, who's overseeing the case, on Thursday rejected the jurors' request to take 39-page jury instructions home to review them.

For tutorials and information on investing and trading stocks, check out Cashay

Sister Wives Season 10 Trailer: Is This It for the Browns?

Here’s How To Watch The 2019 Golden Globe Nominations

N.M. Officer Who Told Suspect He Was Going to 'Choke You Out' Is Charged with Manslaughter