‘Is it okay I phoned in sick… because I’m so NERVOUS?’: England fans tweet of anxiety as they rally behind Three Lions ahead of Colombia clash in tonight’s World Cup knockout

The nerves are starting to set in as England fans prepare for tonight’s clash with Colombia in the knockout last 16 of the World Cup.

Hundreds have taken to Twitter this morning to describe how they are already struggling to concentrate.

Expectations were low for the England squad before they wowed commentators and fans alike with a stunning victory against Panama with the new national treasure Harry Kane scoring a hat trick.

And after finishing second in the group stage, supporters and critics are now gunning for another win as they hope to make it through to the semi-final.

Hilarious tweets show how many have woken up this morning feeling hopeful but scared.

One woman pondered: ‘Is it okay if I phone in sick because I am so nervous?’ 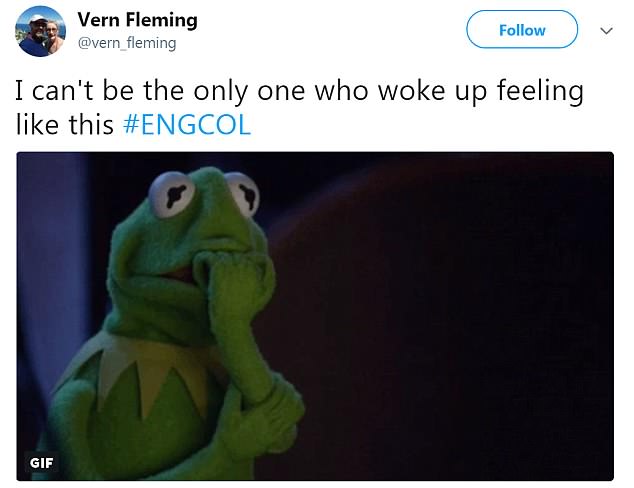 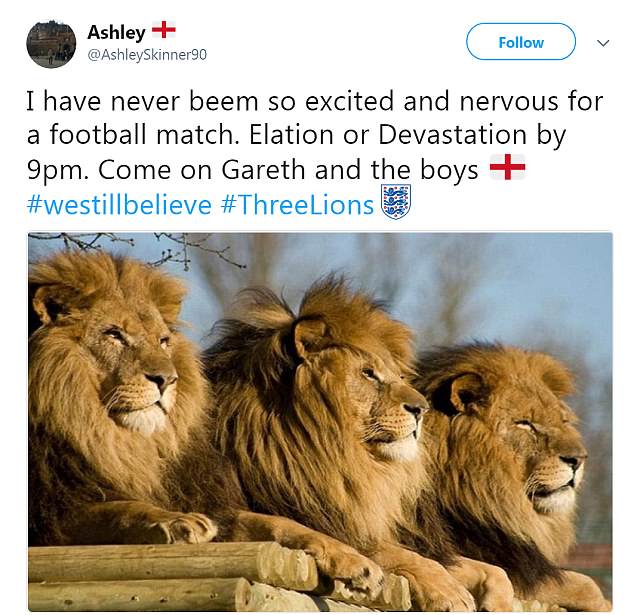 One fan wrote shortly after 7am: ‘I can’t work out whether I’m excited or nervous, all I know is I need a fag and a I need beer and I haven’t had either in years.’

Iain Shepherd posted: ‘Feeling sick with worry and nerves and the game isn’t on for another 12 hours. It’s a huge chance. Come on England!’

While Braden Valles wrote: ‘I am literally only focused on the match tonight now, not going to lie.’

And another said: ‘Sitting here eating my breakfast and now on simulation number 167 of how tonight’s game could pan out.’ Gareth Southgate’s team must get past the impressive Colombians who topped a difficult group containing Japan, Poland and Senegal.

The last time the two sides met was back in 2005 for a friendly where England won 3-2.

They haven’t met competitively since 1998 where David Beckham and Darren Anderton gave the Three Lions a comfortable 2-0 win at the World Cup in France.

ENGLAND come up against the South Americans on Tuesday, July 3.

Kick-off will be at 7pm.

Prefer Your Swimsuits With Padding? You'll Love These 9 Pieces — None of Which Are Triangle Tops

From Pez dispensers to life-size cutouts, here's the tackiest gifts cashing in on Prince Harry and Meghan's Royal Wedding

RICHARD PENDLEBURY: How could Arron Banks afford to bankroll Brexit?