Europe marks VE Day as war rages in Ukraine: Macron lays wreath in Paris and ceremonies are held in Berlin as continent commemorates the 77th anniversary of victory over Nazi Germany

French president Emmanuel Macron laid a wreath at the Arc de Triomphe today as he led commemorations across Europe marking VE Day, while the war continues to rage in Ukraine.

Victory in Europe Day is on May 8 to coincide with the anniversary of Nazi Germany agreeing to surrender 77 years ago.

While ceremonies are held to remember the courageous efforts of those who fought in WW2, the focal point for many today is Russia’s invasion of Ukraine.

Russia itself does not celebrate the end of WW2 on May 8 but on May 9, as Josef Stalin insisted on being present for the the signing of the surrender and held his own ceremony a day later.

Ukraine’s President Zelensky released a Victory Day video from Borodyanka for May 8, saying that evil had returned.

He questioned the phrase ‘never again?’, following up by saying ‘try telling Ukraine that’.

While UK’s Prime Minister Boris Johnson took the opportunity to once again show his support for Ukraine. 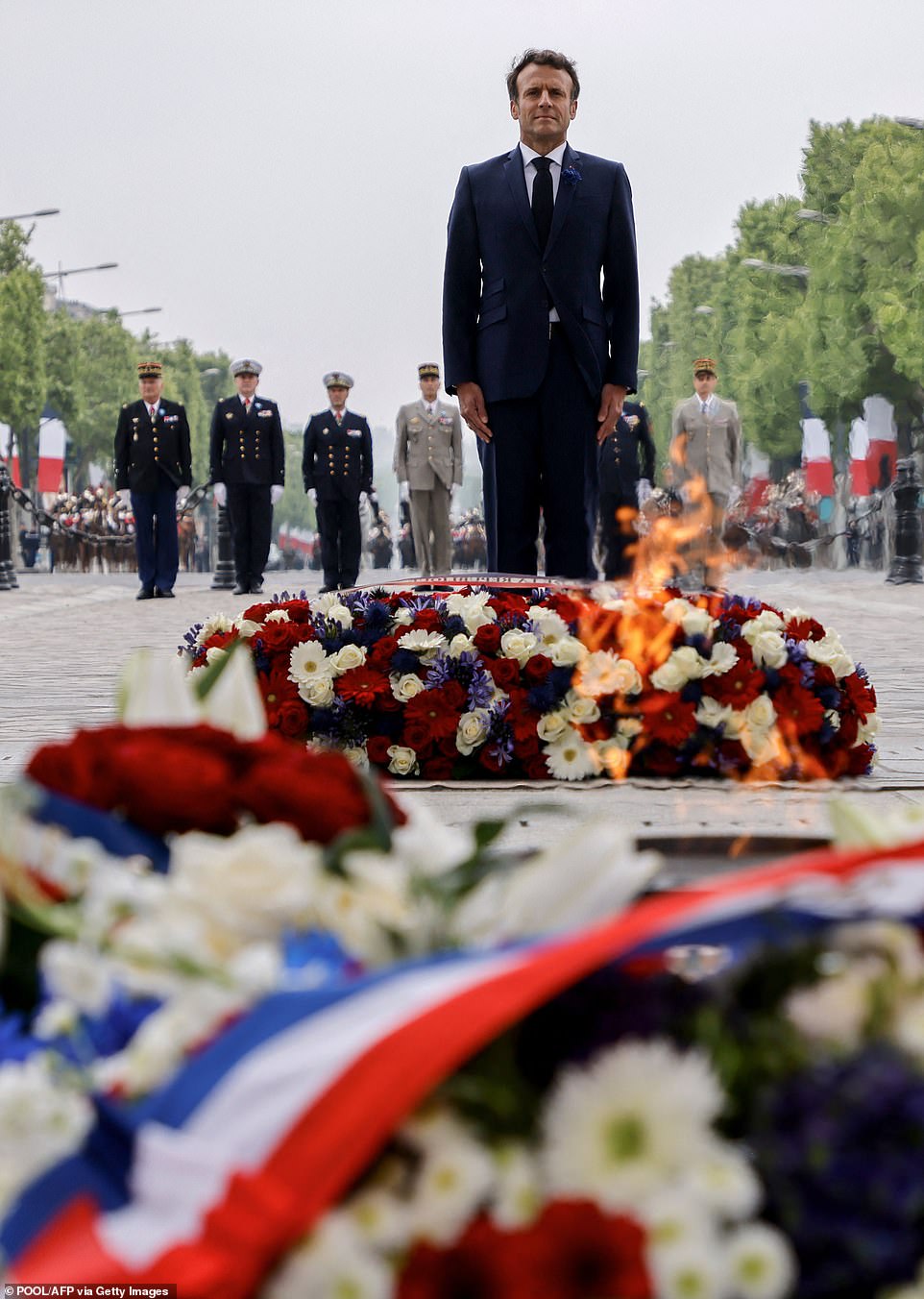 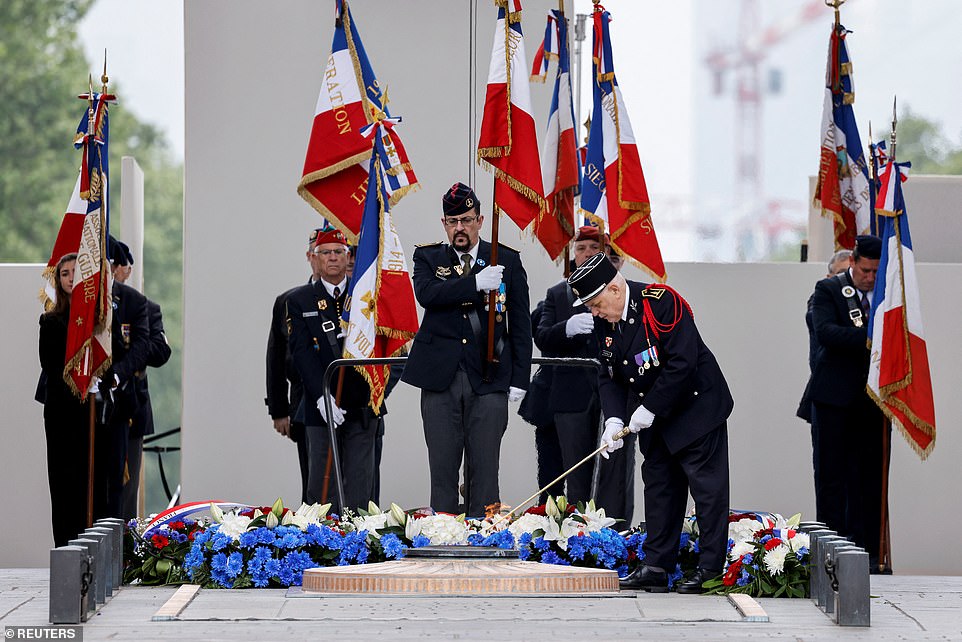 Flag bearers light the flame at the tomb of an unknown soldier, ahead of ceremonies to mark the 77th anniversary of the Allied victory against Nazi Germany and the end of World War II (pictured at the Arc de Triomphe, in Paris) 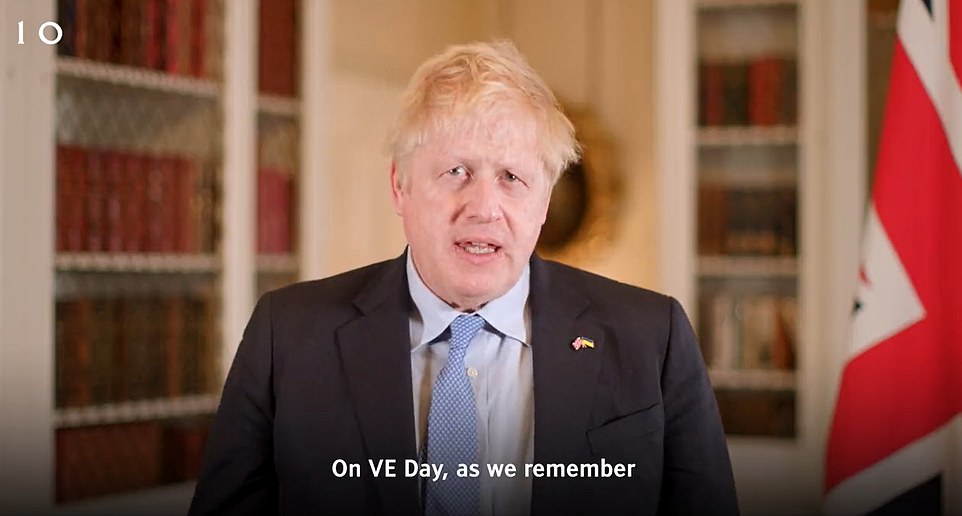 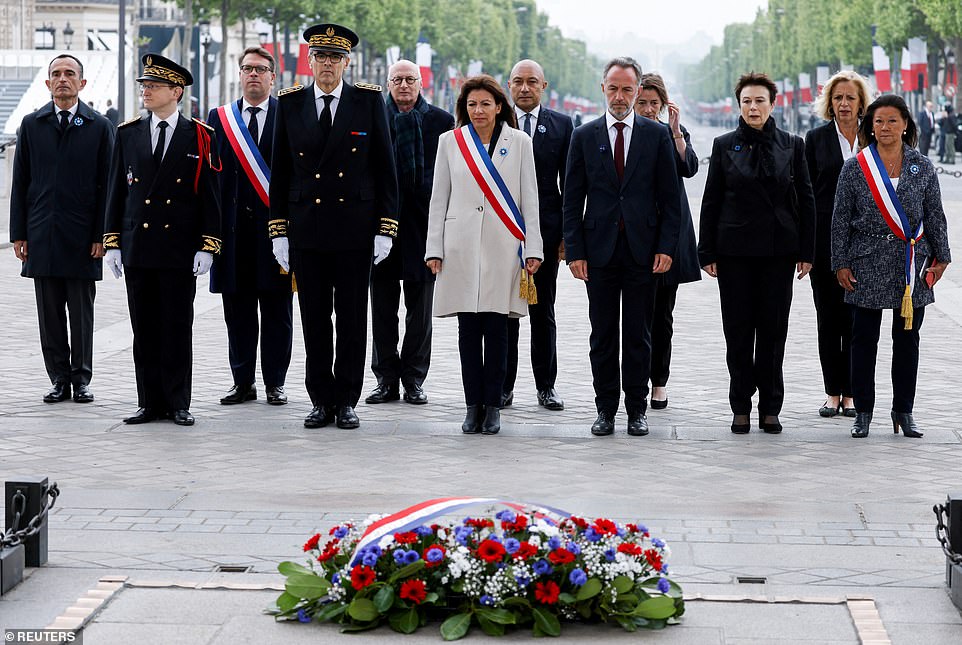 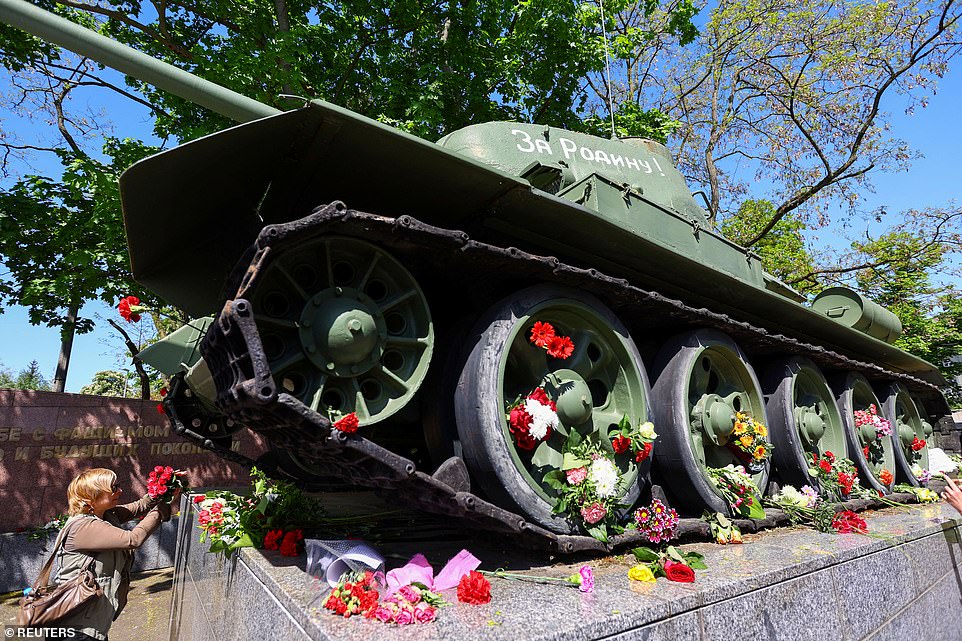 A woman places flowers on a T-34 Soviet Red army tank at the Berlin Karlshorst Museum, the place where the high Command of the German Wehrmacht signed the unconditional surrender 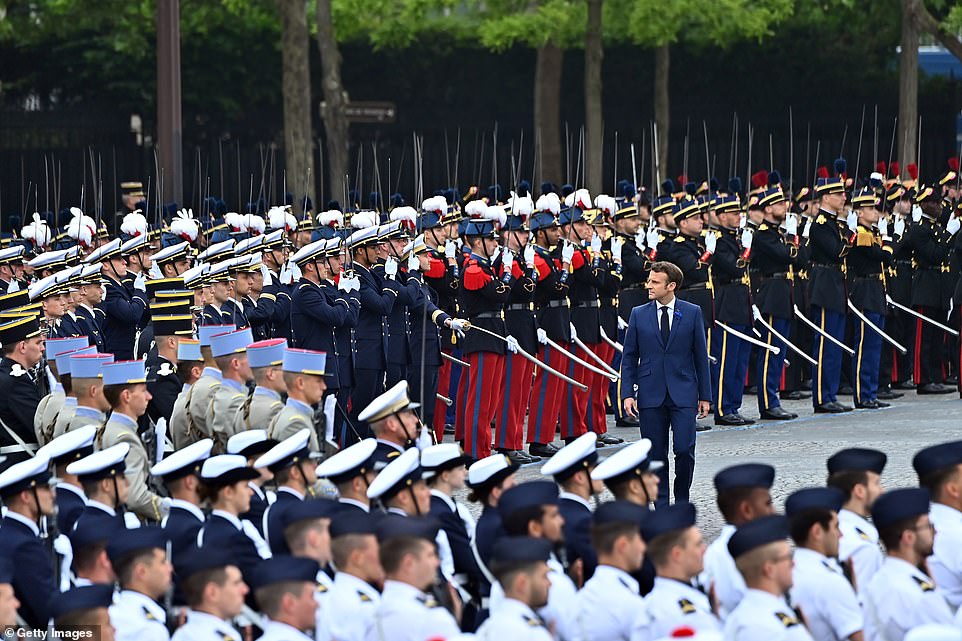 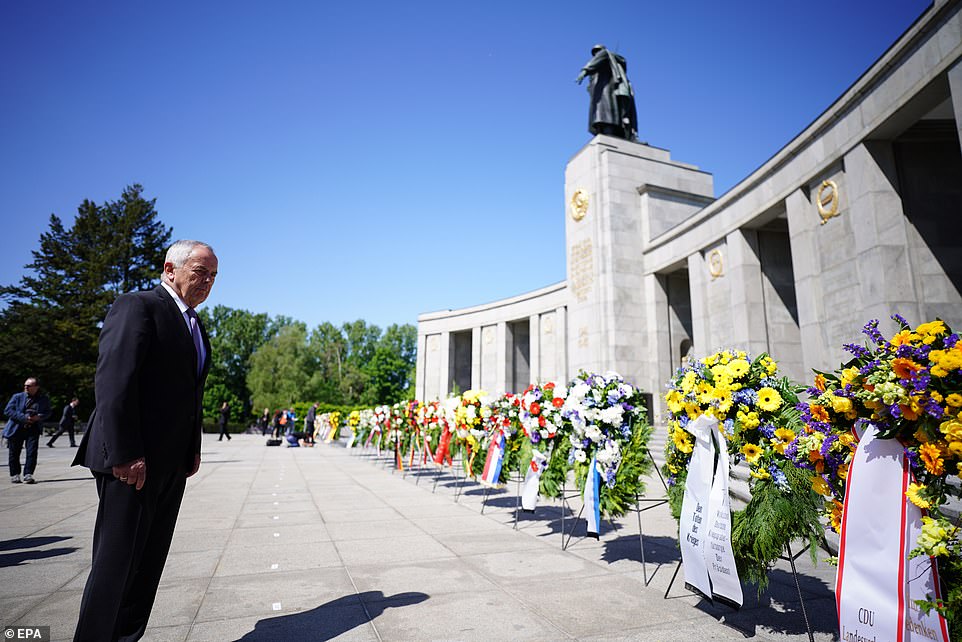 French President Emmanuel Macron led the ceremony in Paris by laying a wreath at the Tomb of the Unknown Soldier underneath the Arc du Triomphe.

He said: ‘On VE Day, as we remember those who sacrificed their lives in WW2, we also think of those who’ve died and suffered in Russia’s illegal invasion of Ukraine.

‘Our respect and gratitude for those who have fought in previous conflicts strengthens our determination to support the people of Ukrainian in their struggle.

‘We won’t forget the sacrifices that have been made over the generations to ensure peace and freedom in Europe.’ 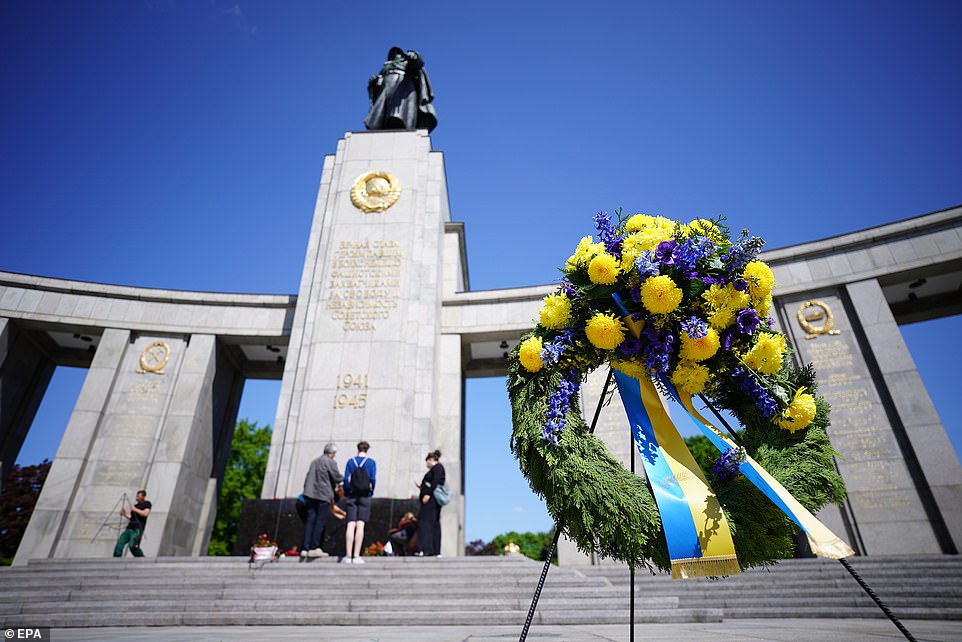 A wreath from the embassy of Ukraine was placed in front of the Soviet War Memorial in Berlin, Germany, despite the Berlin regional senate banning the showing of Ukrainian and Russian flags near memorials during the weekend of the 77th anniversary 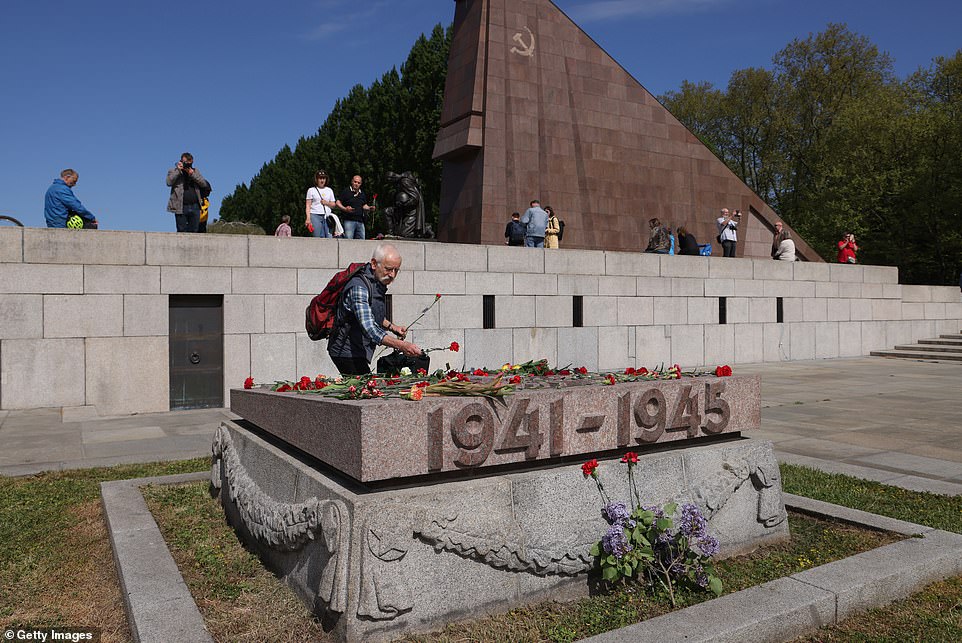 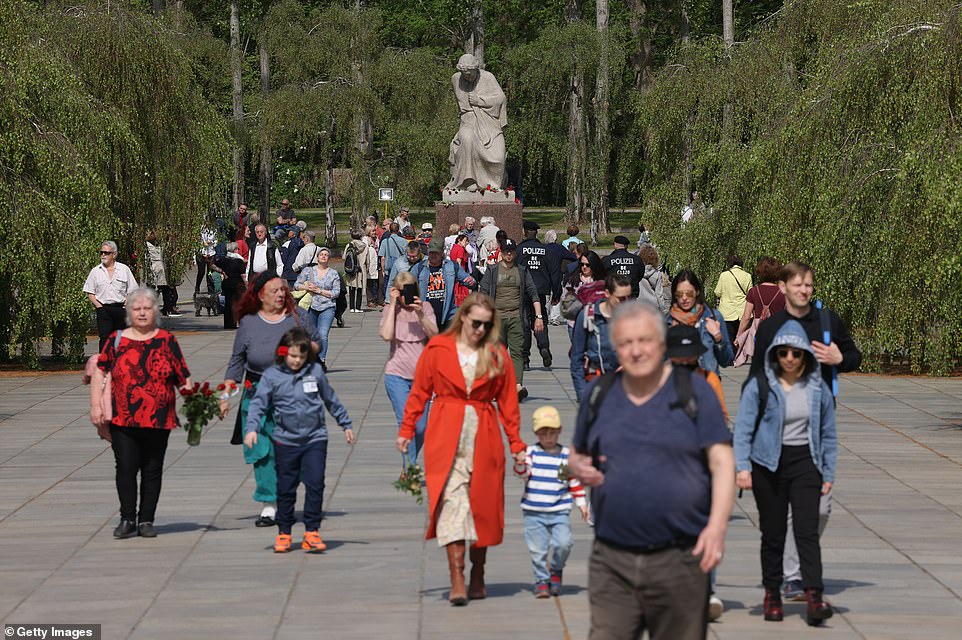 Many people make a journey out to war memorials on VE Day and some lay flowers there (pictured: people arriving at the Soviet war memorial in Treptower Park) 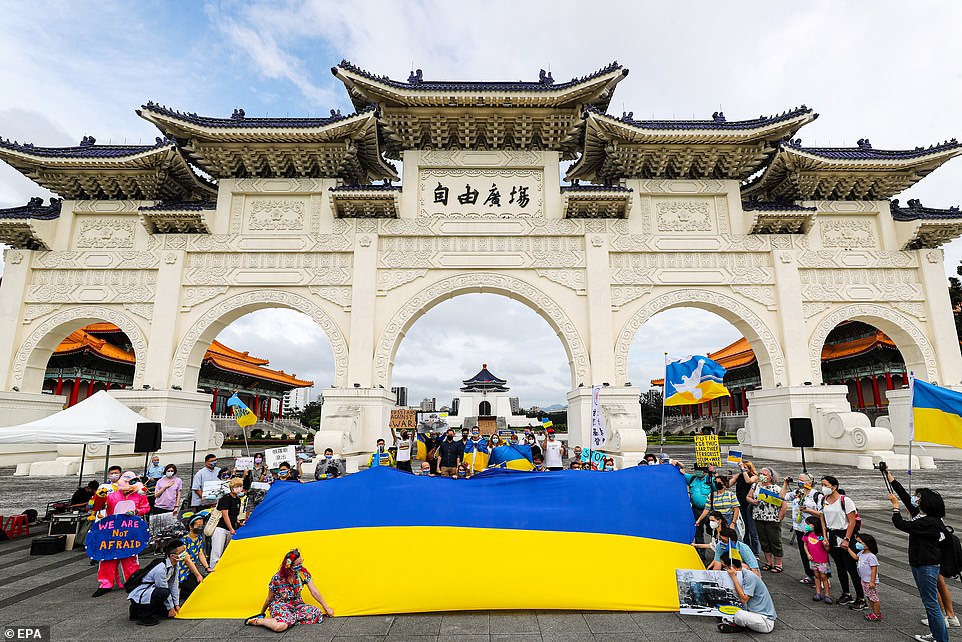 Protesters displayed placards and photos of war in Ukraine in front of the Liberty Square during a Victory Parade organized by Ukrainians, in Taipei, Taiwan 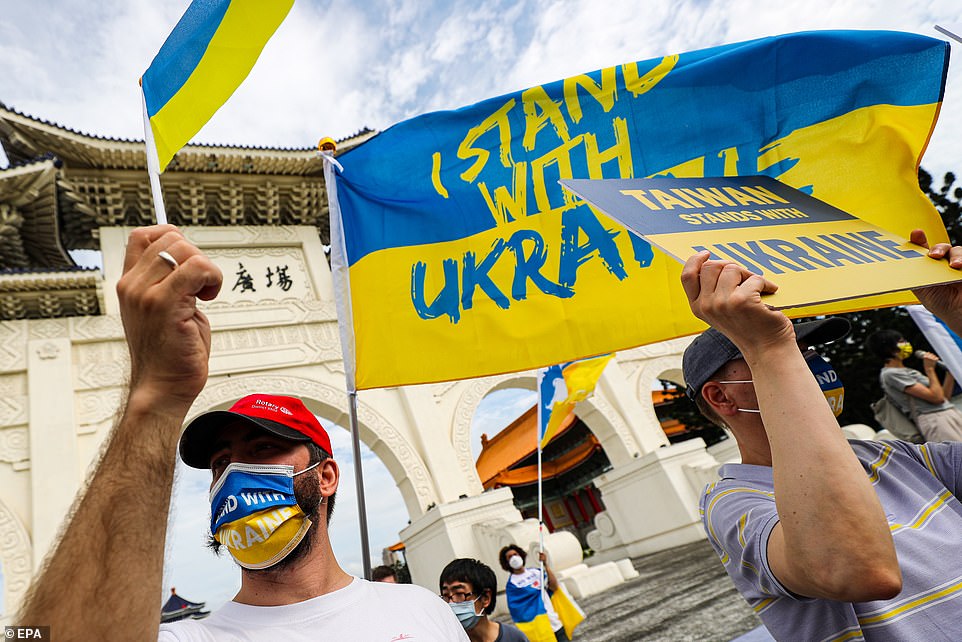 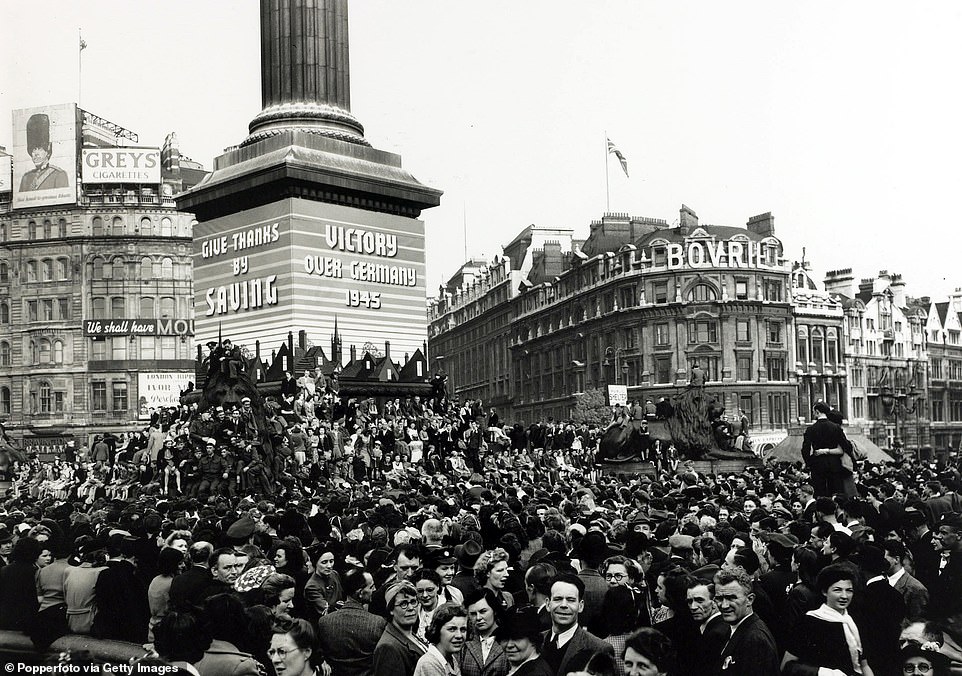 Large-scale parades across Europe are less likely or will have been downsized as no leader is too keen to be celebrating the ending of a conflict in Europe while one currently wages on.

Though it has been used as an opportunity to convey a somber message about the Russian invasion and its destruction.

While in German the Berlin regional senate banned the showing of Ukrainian and Russian flags near memorials during the weekend of the 77th anniversary of the end of second World War.

They said this is to avoid the instrumentalization of symbols in correlation to the ongoing war in Ukraine.

Although many seem undeterred by the new rule. 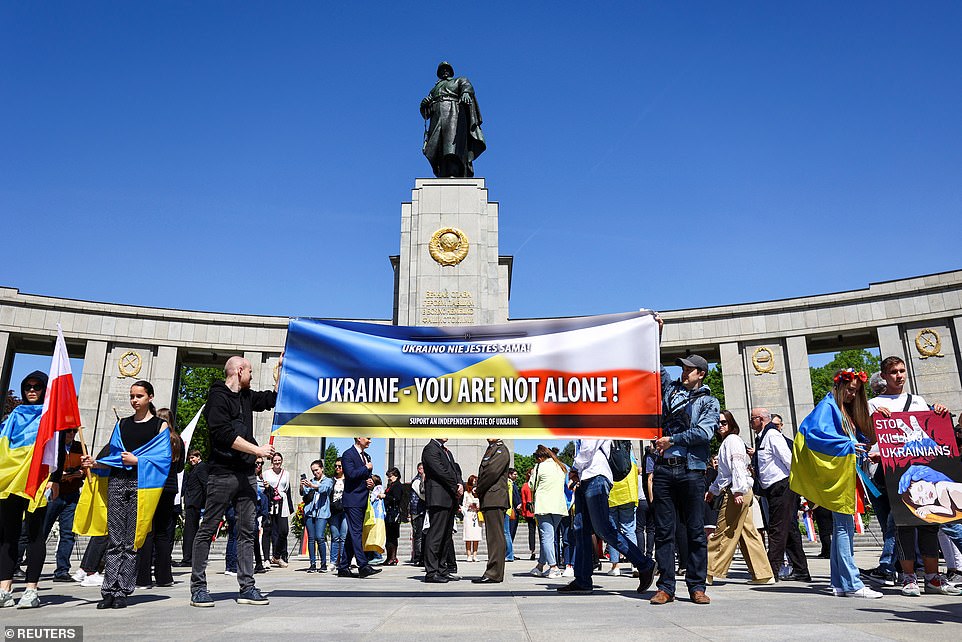 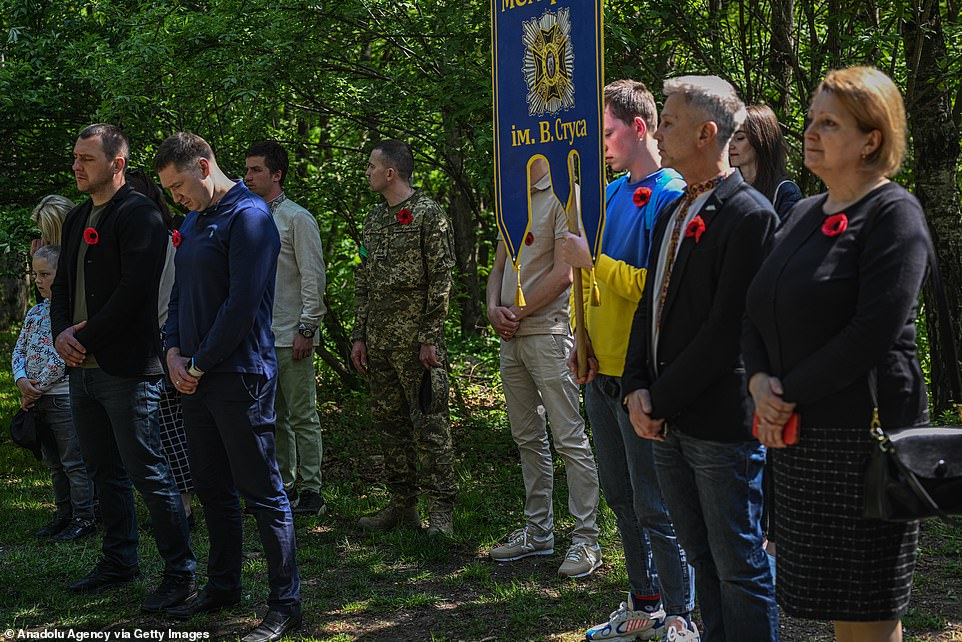 People take part in the Day of Remembrance and Reconciliation in Lviv, Ukraine, held at the site of a former concentration camp 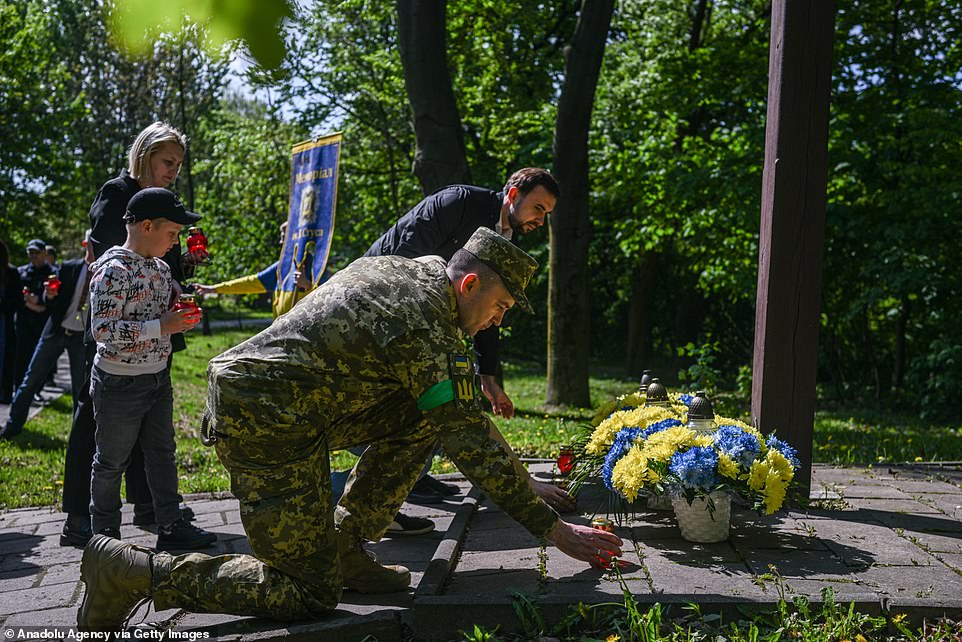 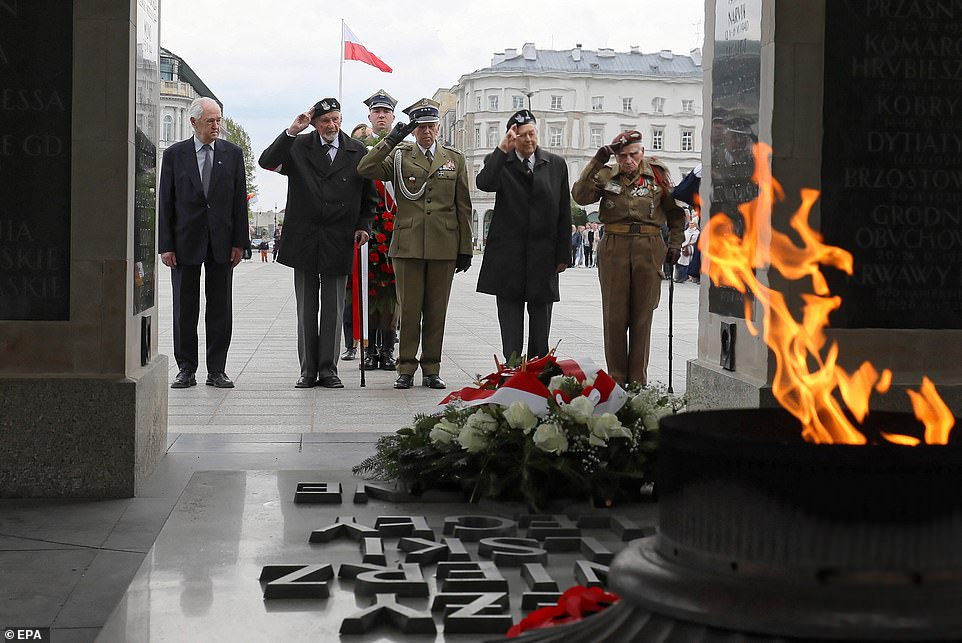 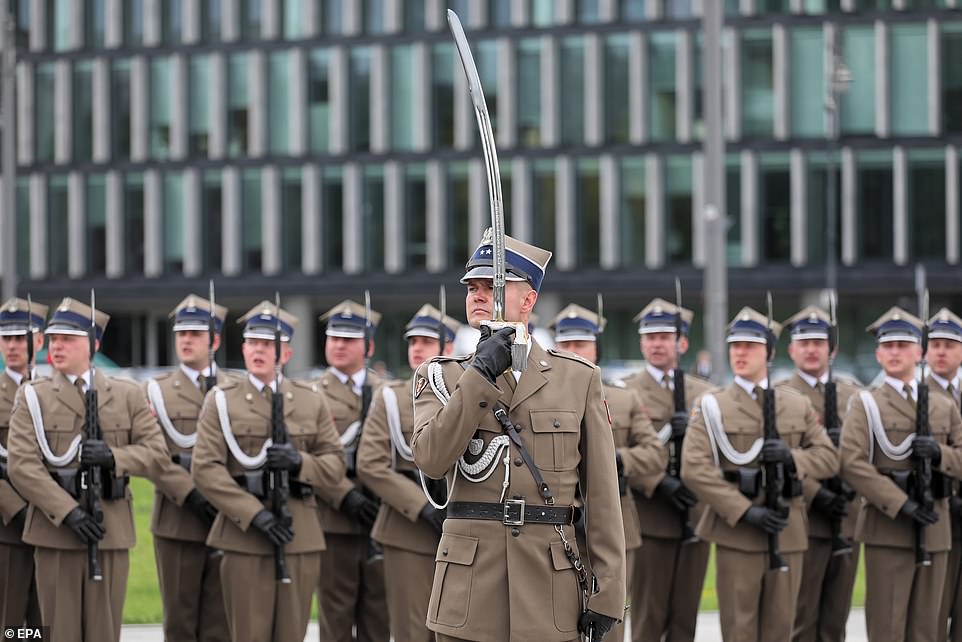 Polish soldiers took part in the ceremony outside the Tomb of the Unknown Soldier in Warsaw, Poland 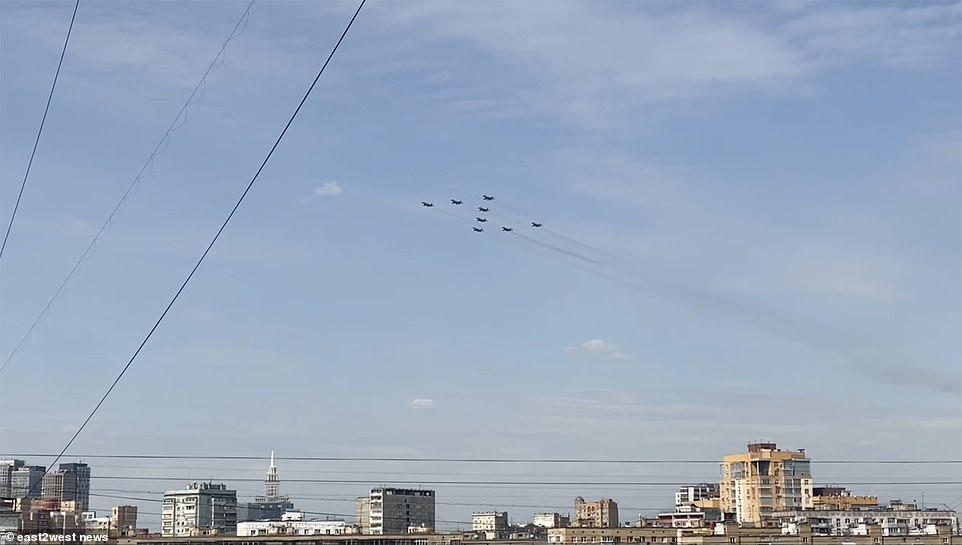 Russian aircrafts have been seen flying in ‘Z formation’ during a Victory Day parade rehearsal, which takes place on May 9 for them 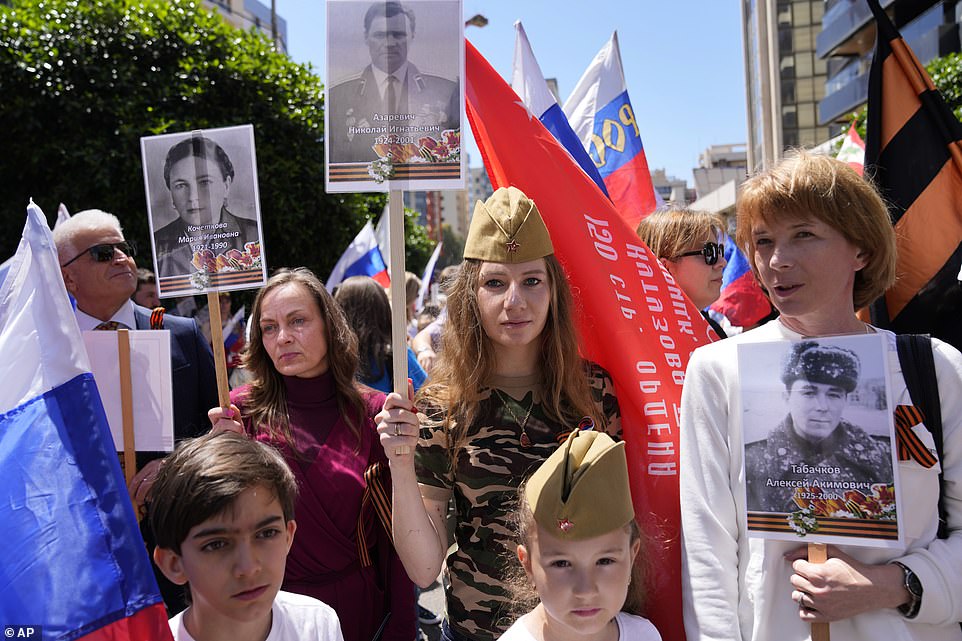 Lebanese and Russian citizens carry portraits of relatives who fought in World War II during a march for Russia’s Victory Day in Beirut, Lebanon 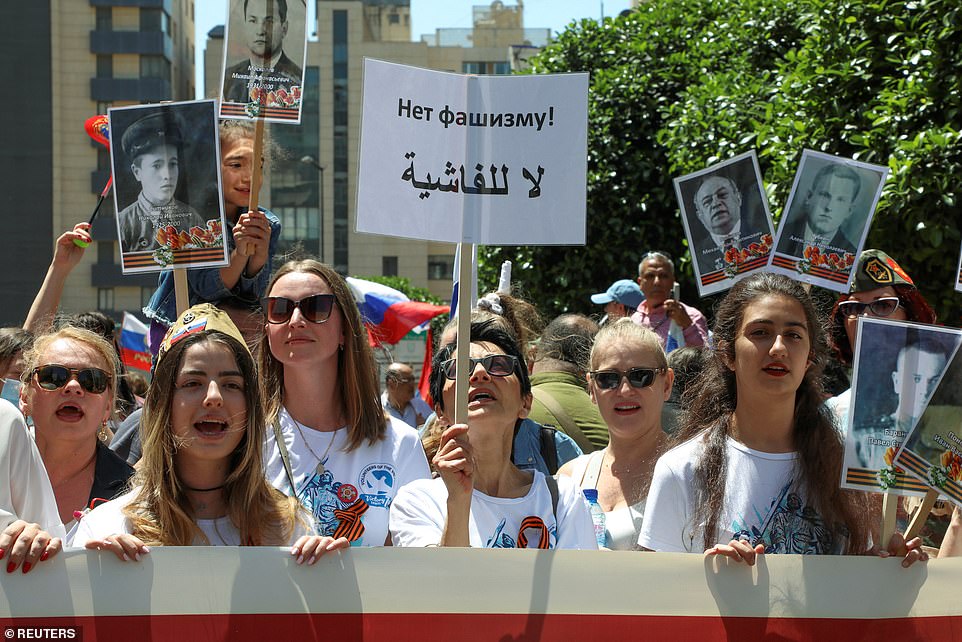 A woman holds a placard that reads ‘No to fascism’ during a march on Victory Day in Beirut, Lebanon 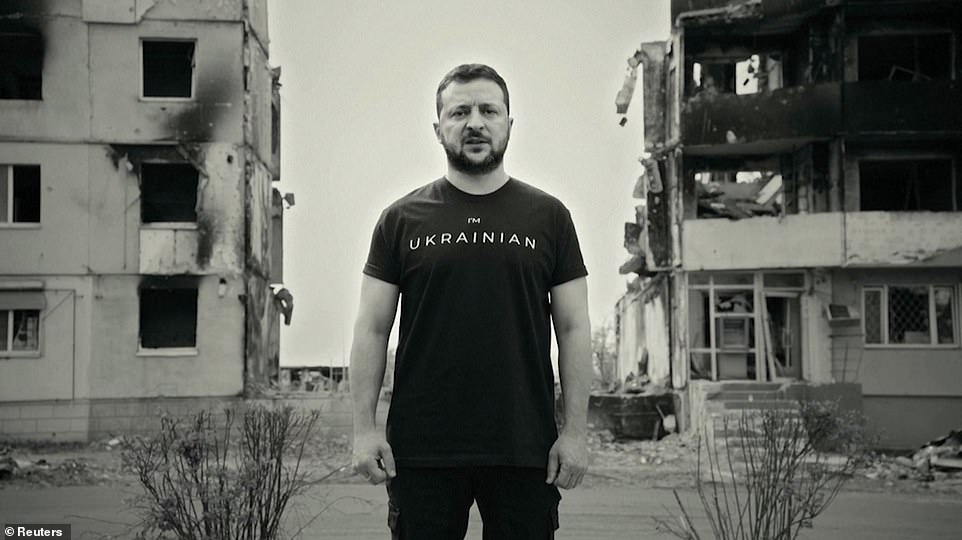 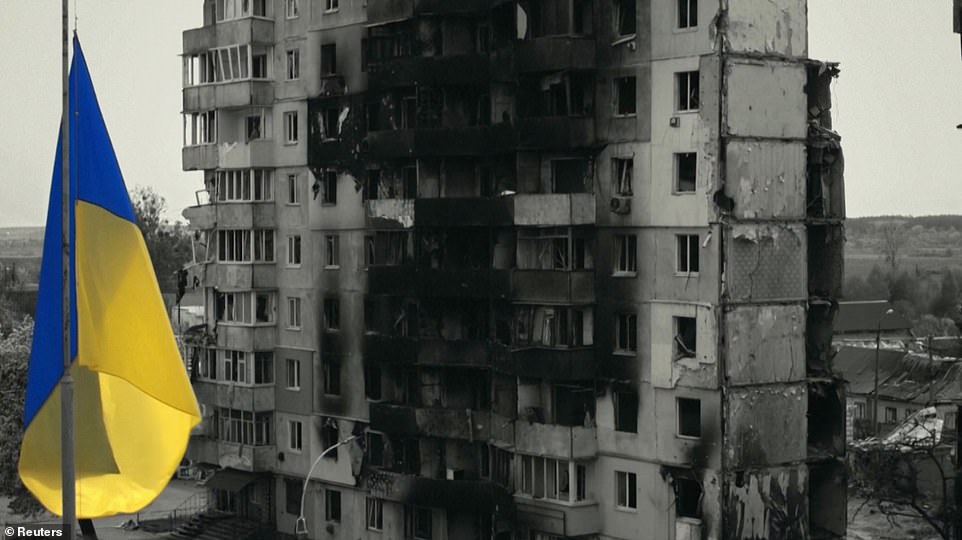