Washington: A bipartisan group of 58 former senior national security officials has declared that "there is no factual basis" for President Donald Trump’s proclamation of a national emergency to build a wall on the U.S.-Mexico border.

The joint statement, whose signatories include former Secretary of State Madeleine Albright and former Defence Secretary Chuck Hagel, will come a day before the House is expected to vote on a resolution blocking Trump's declaration on February 15. 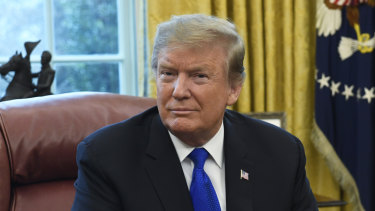 The proclamation by US President Donald Trump of a national emergency is facing a barrage of lawsuits and other actions.Credit:AP

Trump's national emergency declaration followed a 35-day partial government shutdown, for which he claimed responsibility after Congress did not approve the $US5.7 billion ($8 billion) he sought to build a wall.

In announcing his declaration, Trump predicted that lawsuits and "possibly . . . a bad ruling, and then we'll get another bad ruling" before winning at the Supreme Court.

The former security officials' 11-page declaration sets out their argument disputing the factual basis for the president's emergency.

Among other things, they said, illegal border crossings are at nearly 40-year lows. Undetected unlawful entries at the US-Mexico border decreased from 851,000 to nearly 62,000 between 2006 and 2016, they said, citing Department of Homeland Security statistics.

Contrary to the president's assertion, there is no documented emergency at the southern border related to terrorism or violent crime, they said, citing administration reports and independent think tank analyses. 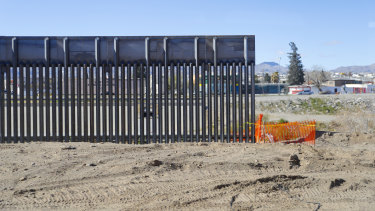 An incomplete section of border fencing as seen from the Texas side of the US-Mexico border in El Paso, Texas, on Saturday.Credit:AP

Similarly, they state that there is no drug trafficking emergency that can be addressed by a wall along the southern border, noting that "the overwhelming majority of opioids" that enter the United States are brought in through legal ports of entry, citing the Justice Department.

They also argue that redirecting money pursuant to the national emergency declaration "will undermine US national security and foreign policy interests". And, they assert, "a wall is unnecessary to support the use of the armed forces", as the administration has said.

Some of the same former officials wrote a joint declaration disputing the factual basis for the president's order shortly after he took office in January 2017 barring entry to foreign nationals from seven predominantly Muslim countries. The former officials asserted that the order was not based on a bona fide national security assessment but on "a deliberate political decision to discriminate against a religious minority."

Their views were filed as a joint declaration and later as a friend-of-the court brief in lawsuits challenging the original order and subsequent revisions, and was cited by almost every federal judge who enjoined the ban. By the time the challenges reached the Supreme Court, the administration had significantly narrowed the ban, which the high court upheld on a 5-to-4 vote. 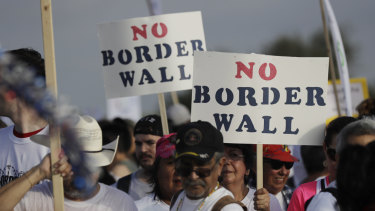 Hundreds of people march along a levee toward the Rio Grande to oppose the wall the US government wants to build on the river separating Texas and Mexico.Credit:AP

With respect to the declared national emergency, plaintiffs have filed two cases in the District of Columbia, two in California and one in Texas.

What time is Dancing on Ice on TV tonight?

BBC host savages NHS chief over coronavirus preparation: ’You don’t have the beds!’

A great time for a holiday? Europe's tourist hotspots free from crowds