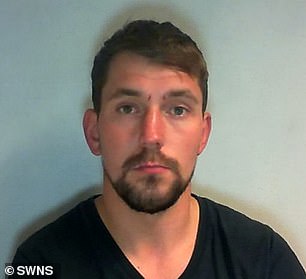 An ex-top jump jockey who texted a pal ‘about horses’ moments before a devastating crash which left an elderly couple with life-changing injuries has been jailed.

Fearghal Davis – who rode for famous race-horse owners J P McManus and Sir Robert Ogden – was ‘looking down and fiddling with his mobile phone’ while speeding around a blind bend.

The 32-year-old then ploughed head-on into a Citroen Picasso which tried to swerve out of the way, a court heard.

Elderly couple William Savory, 77, and wife Rosemary, 76, had to be cut free from the vehicle when emergency services arrived before being rushed to Hull Royal Infirmary.

But Davis – who had an illustrious career on the jump circuit – fled by this point, leaving his wrecked Ford Focus at the scene in Gate Helmsley, near York.

A jogger said he saw Davis – whose hands and face were soaked in blood – ‘being picked up in a navy-blue car and being driven away’ from the crash site.

The Irish ex-jockey – who works at David O’Meara stables following his retirement from professional horse-racing – was arrested the following day at his home address.

He claimed to have no recollection of the crash because of recurrent memory loss following a riding accident he had at the age of 18.

Forensic analysis of his mobile phone showed a series of incriminating text messages sent between the former jockey and some of his friends.

Davis admitted two counts of causing serious injury through dangerous driving and was jailed for 34 months at York Crown Court on Thursday. 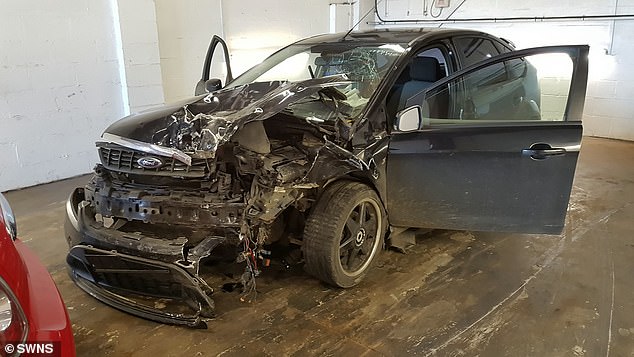 He was also given a four-year driving ban.

Prosecutor James Gelsthorpe said Mr Savory had slowed down at the bend as a precaution but Davis’s car came straight at them on August 10 last year.

Mr Savory tried to swerve out of the way but it was ‘too late’ and the cars collided on the single-track road.

The couple’s Citroen was ‘flung’ onto an embankment and Mrs Savory was ‘crumpled up’ inside the car.

Mr Gelsthorpe said there was no proof that Davis was over the drink-drive limit, but the defendant later admitted he had had a few drinks before the crash at about 3.30pm.

But in the moments before the crash, Davis sent a Whatsapp message to a friend ‘regarding a horse’, a court heard.

Prosecutor Mr Gelsthorpe said: ‘The defendant’s phone records indicate that leading up to (about 3.30pm), he was sending WhatsApp messages to (a friend) regarding a horse.’ 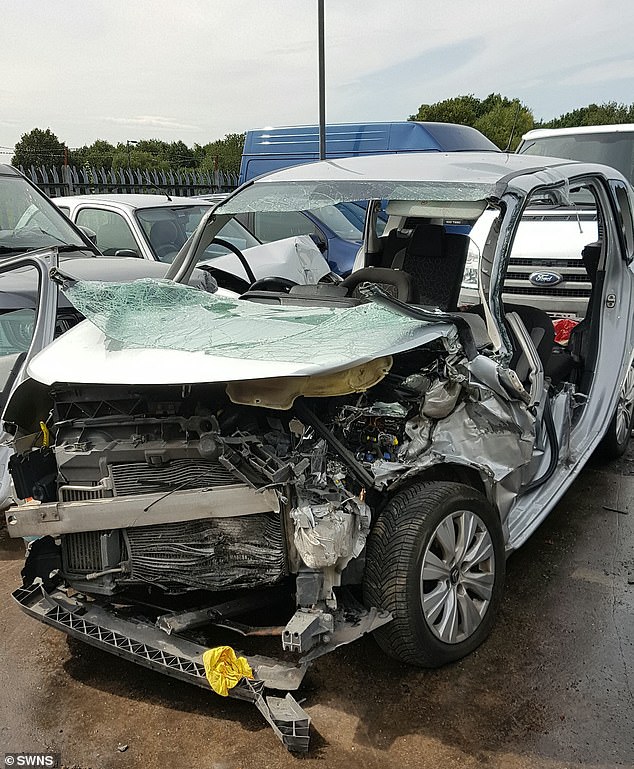 William Savory and wife Rosemary’s mangled Citroen Picasso. The pair were hospitalised after trying and failing to swerve out of the way of Davis’s oncoming Ford Focus

Mrs Savory suffered a broken leg and neck and needed hip-replacement surgery. She also suffered nerve damage to her eye which led to blurred vision.

He was eventually discharged but later readmitted due to concerns about his ‘memory and cognitive functions’.

It’s believed that a pre-existing brain haematoma had been exacerbated by the crash and Mr Savory had to undergo surgery to have the blood clot drained.

The couple, from Stamford Bridge, North Yorks., said their lives had been ruined by Davis’s reckless Actions.

They could no longer go on trips out in the car and Mrs Savory had been unable to return to her work at the supermarket in York due to ill health.

They had had had to fit ‘every imaginable’ mobility aid at their home including grab rails. 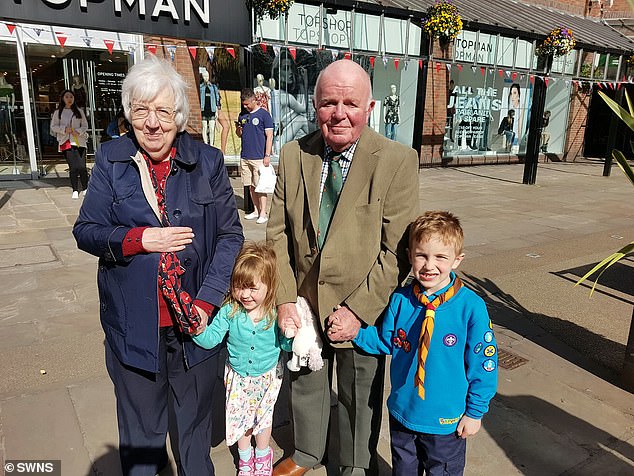 William and Rosemary with their grandchildren Oliver, eight, and Margot, six

Mrs Savory suffered from dizziness and sleeplessness and her husband had to give up his hobbies and had missed out on cherished activities with their grandchildren.

Mr Savory said he had slumped into severe depression, adding: ‘I feel as though I’ve given up on everything.

‘There has been no expression of remorse from (Davis) and no recognition of the damage he’s done to our family.’

Defence barrister Robert Mochrie said Davis was a hard-working man with no previous convictions but conceded that he was ‘looking down and fiddling with his mobile phone’ before the crash.

Judge Andrew Stubbs QC said Davis had ‘effectively attempted to pervert the course of justice’ by trying to hoodwink police with claims of memory loss.

Andrew Savory, the victims’ firefighter son, said Davis’s sentence should serve as a warning to others who used their mobiles while driving.

He was given the devastating news by his boss while his parents were being cut free from the vehicle.

Choking back tears, the father-of-two said: ‘He (Davis) has tried to evade justice all the way through and there was no tangible apology. It has been horrendous (and) my parents will never be the same again.’

His last race was at Newcastle, where he fell on Gorey Lane in November 2013.