The explosive moment promised by mining magnate Gina Rinehart and her company which would “blow” her children out of West Australian court proceedings over Lang Hancock’s lucrative Pilbara iron ore mine Hope Downs has yet to eventuate.

Opposing counsel argued late on Wednesday that it was just more of the same from Mrs Rinehart’s camp, designed to stall proceedings and reignite issues that had already been dealt with by various courts. 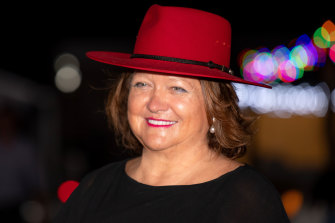 The most eruptive moments came from legal counsel representing Mrs Rinehart’s oldest children John Hancock and Bianca Rinehart, who laid bare allegations of fraud against Australia’s wealthiest woman as reasons why they should not be struck out from next year’s trial over the ownership of the Hope Downs multibillion-dollar iron ore fortune.

Sydney senior counsel Christopher Withers, acting for John and Bianca, described how Mrs Rinehart shifted her father’s mining assets in a complex web of agreements and deeds to her company Hancock Prospecting (HPPL) in a move he proposed was designed to defraud Lang’s grandchildren of their rightful and very valuable inheritance.

Although many of these allegations are being argued before the Federal Court in confidential arbitration between the Hancock dynasty, WA Supreme Court Justice Rene Le Miere ruled that everything argued in his court would not be consigned to a suppression order and it was up to counsel to manage confidentiality regarding the federal proceedings.

Mr Withers seized on the opportunity before the open court to claim Mrs Rinehart had misappropriated Hope Downs’ mining assets for her own benefit by making the Hancock Family Memorial Foundation (HFMF) insolvent and subject to a “sinful” debt reconstruction deal.

He said the deal involved the buy-back of a 30 per cent shareholding in Hancock Prospecting held by HFMF for about $9.3 million, which Mr Withers argue was “below fair value”.

“We say that debt reconstruction could not or would not have occurred were it not for the manipulation of the financial position of HFMF that allowed Gina to say HFMF was insolvent,” he said.

Mr Withers argued Mrs Rinehart, as director of all the family companies and heading up all the trusts, had total control and caused Hancock Prospecting to make a constructive trust claim against Hancock Resources Limited (HRL) when it held the Hope Downs mining assets in 1992.

“And then two years later she caused HRL, through her control of HRL, to stop defending the constructive trust fund with the result that those assets had to be transferred back to HPPL,” he said.

The transfer of the mining assets had a negative affect on the HFMF balance sheet, Mr Withers argued, claiming it paved the way for Mrs Rinehart argue the foundation was insolvent, enter a debt reconstruction and buy back the shares.

Mr Withers also used Mrs Rinehart’s richest iron ore mine, Roy Hill, as another example of her diverting mining assets out of the family trust, but denied John or Bianca staked any claim over Roy Hill in the Supreme Court proceedings, only in Hope Downs, and to say otherwise was “ill founded”.

“Now your honour can see how interconnected all these allegations are,” he told the court.

“And just because [Mrs Rinehart and HPPL] don’t want this to be litigated in this court that does not lend itself to an interpretation of section 8 that is incomprehensible and beyond what it is clearly intended to do.”

Mr Withers argued that at no point did Noel Hutley SC, on behalf of Hancock Prospecting, say why the children should be struck out from proceedings.

Earlier, Mr Hutley argued under section 8 of the Commercial Arbitration Act that the Supreme Court should refer all matters after Lang’s death to the Federal Court arbitration.

He argued in favour of narrowing the scope of the Supreme Court trial, set down for early next year, to the acquisition of mining tenement licences before Lang’s death and the nature of his partnership with Wright Prospecting, which brought the original action and laid claim to equal share in Hope Downs.

Mr Hutley also applied to prevent a further party, DFD Rhodes – which was also claiming a small royalty interest in Hope Downs – from continuing with proceedings under the same section of law.

DFD Rhodes’ counsel Jeremy Stoljar SC told the court his clients were in no way interested in joining a private family stoush that had no bearing to their claim and the time for such arguments had well and truly passed.

The matter continues on Thursday.

5 Quarantine Habits That Are Relationship Red Flags, According To Experts

Climate change expert dies after 'falling into a crevasse' of glacier