London: Britain's health service is under "unprecedented pressure" officials said, as the country reported more than 53,000 cases, another record high.

On Wednesday AEDT, 53,135 more infections were recorded. Infections have surged because of a variant of COVID-19 that emerged in south-east England that is more transmissible than earlier versions of the virus that had been previously circulating. 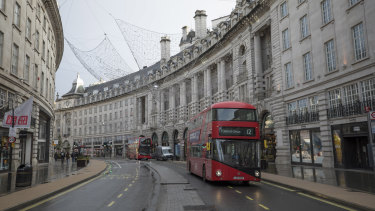 Buses on an empty Regent Street in London.Credit:Bloomberg

Britain is struggling to roll out vaccines before the National Health Service is overwhelmed, with paramedics reporting queues of ambulances outside hospitals.

The number of patients in hospital in England now exceeds the number at the height of Britain's first peak in April.

Susan Hopkins from Public Health England said the figures were of "extreme concern."

"We are continuing to see unprecedented levels of COVID-19 infection across the UK, which is of extreme concern particularly as our hospitals are at their most vulnerable," Dr Hopkins said. 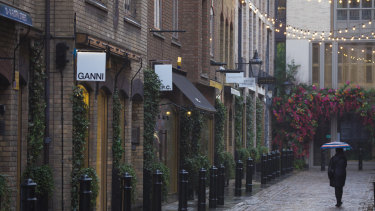 "Whilst the number of cases reported today include some from over the festive period, these figures are largely a reflection of a real increase.

"It is essential, now more than ever, that we continue to work together to stop the spread of the virus, bring the rate of infection down, and protect the most vulnerable and the NHS."

"We must suppress this virus to protect our NHS and save lives until the vaccine can keep us safe," he said. Cabinet is considering further restrictions, including closing schools which are due to reopen after the Christmas break next week and Hancock will update the Commons on Thursday morning AEDT.

"You are asking teachers and support staff to teach in often poorly ventilated classrooms, with no PPE in those classrooms and with the ability to socially distance very limited," the Union said in a letter to Prime Minister Boris Johnson.

NHS critical care doctor and president of the Doctor's Association Samantha Batt-Rawden said things were "really bad on the frontline".

"Hospitals are running out of oxygen, one trust has no non-invasive machines left," she said.

Britain, which was the first country to start inoculating against COVID-19, has already vaccinated more than 600,000 people with the two-dose Pfizer BioNTech vaccine.

The country's hopes to vaccinate all its vulnerable by April but this hinges on the independent regulator approving the British developed Oxford and AstraZeneca vaccine, expected as early as this week.