San Francisco: Facebook has referred its decision to suspend Donald Trump to its independent Oversight Board, opening the possibility that the former president's ban could be overturned.

The social media giant indefinitely blocked Trump's ability to post on Facebook and Instagram on January 7, after he used the service to praise the Capitol Hill attackers in messages that many saw as encouraging further violence. 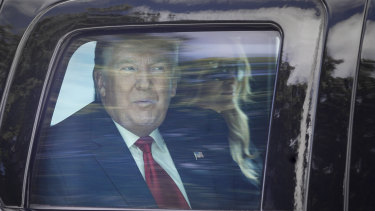 Sir Nick Clegg, Facebook's global head of policy, said that Trump's ban would remain in place until at least after the board had ruled, which could take up to 90 days.

Often described as Facebook's "supreme court", the board has the power to reverse Facebook's decisions based on user appeals. It is made up of 20 experts including Alan Rusbridger, the former Guardian editor, and Helle Thorning-Schmidt, the former Danish prime minister.

Separately, the US House of Representatives has asked the FBI to investigate the role of Parler, an alternative social network popular with Trump's supporters in the Capitol riot.

It came as Trump spent his first hours as a private citizen scrambling to find lawyers to represent him in his impeachment trial, as he settled into his new home at his Mar-a-Lago resort in Florida.

One of Trump's first calls after leaving office was to Lindsey Graham, a South Carolina senator and ally, telling him he was now "looking for some lawyers" for the imminent Senate hearing.

Trump will not be drawing on his usual litigators: Rudy Giuliani, his personal lawyer, is likely to step aside as he could be called as a witness, while attorneys who represented him at the first impeachment hearing have declined.

Nancy Pelosi, the House speaker, has yet to send the article of impeachment to the Senate. According to Senate rules, the trial would start the day after the charge is sent, and it could last as few as three days.

If indicted, Trump will face a ban on ever holding office again.

In his final days in office, he told confidants that he was still weighing up making another run for the White House. He purportedly has plans to form a party, known as the Patriot Party.

?Fox News has begun a staff shake-up after criticism of its election coverage from some prominent right wing figures, including Trump.

Both Chris Stirewalt, the political editor, and Bill Sammon, the managing editor, are to leave the cable news network, The Daily Beast reported.

How to save £1,378 this year using the envelope savings challenge

Worshipping children, a new religion complete with remorse and penance