Optus Stadium was set to be at 75 per cent capacity for the marquee match between West Coast and Fremantle, a week after fans were barred from attending the stadium’s Dockers clash with North Melbourne. 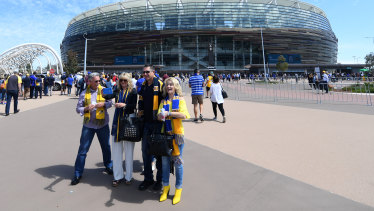 Fans have been banned from West Coast’s home fixture against Fremantle today.

WA Premier Mark McGowan announced on Sunday morning the risk to play the massive fixture was too great after a hotel security guard and two close contacts tested positive to COVID-19.

“The decision has been made on health advice and we have tried to communicate this as quickly as possible.

“Having 45,000 people try to get to [Perth Stadium] at the same time is too much of a risk, especially as we are still going through the close contacts.”

West Coast CEO Trevor Nisbett estimated a three-quarter capacity stadium would cost the club $500,000. It follows that an empty stadium could easily reach into the millions of dollars.

This will be the first Western Derby without fans, with the AFL confirming only essential staff and players would be allowed at the venue, with staff and officials to wear protective masks.

AFL football general manager Steve Hocking said the health and safety of everyone was paramount and the league would continue to take the advice of governments and health officials.

“The health and safety of everyone in the game and the wider community remains the priority as we continue to navigate the pandemic,” Mr Hocking said.

“The AFL thanks all supporters for their understanding as we continue to be led by the advice of governments and health officials.”

For supporters who have purchased Derby tickets at Optus Stadium, Ticketmaster will issue a refund. No action is required from the ticket purchaser.