A mob of wild kangaroos that live in a popular picnic spot are viciously attacking the tourists who flock to see them, and an addiction to carrots and fast food is to blame.

The Morrriset picnic area is an unlikely tourist attraction. It sits two hours out of Sydney in the grounds of a large psychiatric hospital, has no amenities or infrastructure but is home to hundreds of wild kangaroos.

Each week, thousands of tourists flock to the destination that promises wild kangaroos that are ‘tame enough to get close to and take photos with.’ 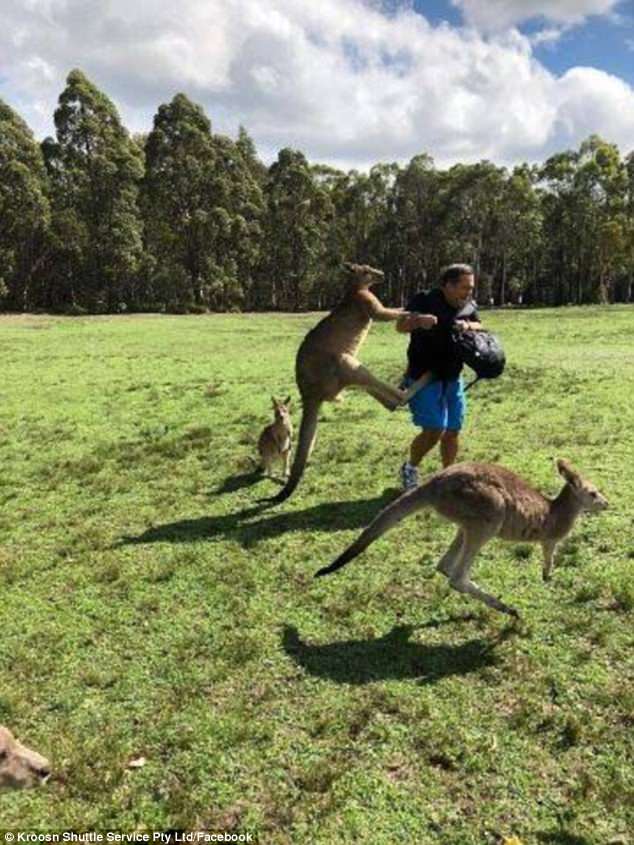 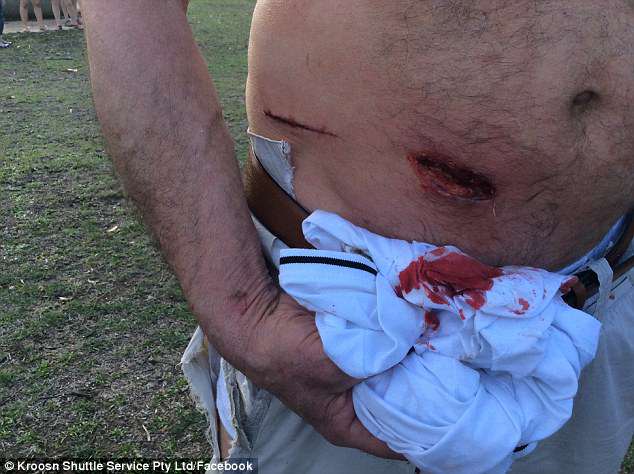 One man who said he had not fed the animals was still given a large gash in his stomach. he had eaten McDonald’s before visiting the site 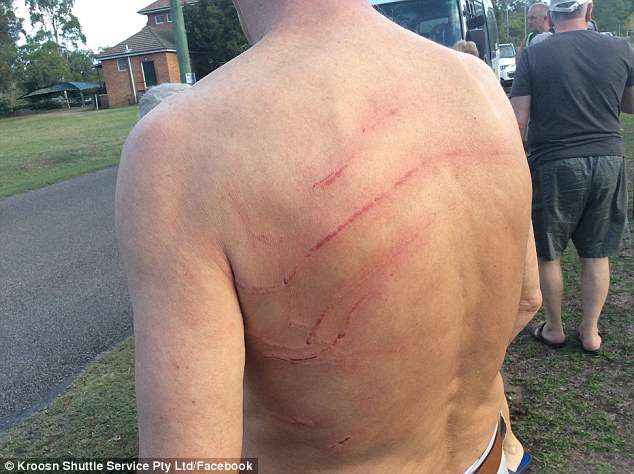 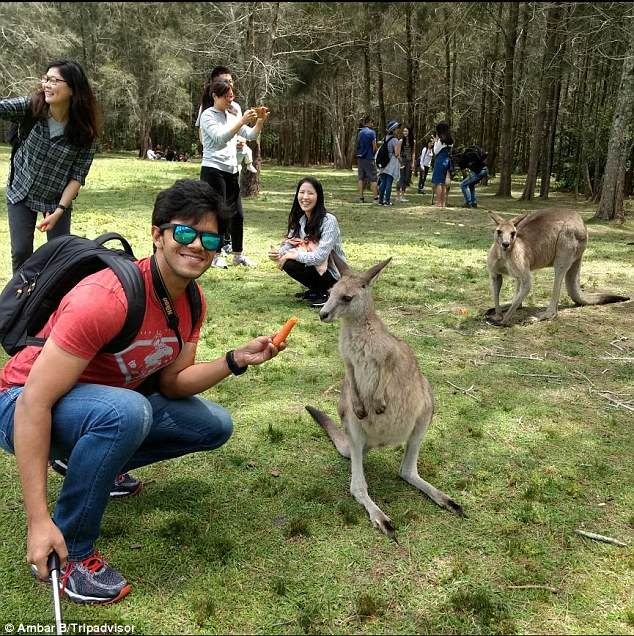 But daily tourists are leaving the site bloodied and bruised after being attacked by the animals who have an addiction to human food.

Shane Lewis, who drives around 500 people to the site each week says there is an attack at least once a day.

‘There are about 1500 people visiting the site each week. It’s become a major tourist attraction. There’s no water, not toilets and it’s right next to a psychiatric hospital,’ he told Daily Mail Australia.

‘The tourists will go to the local supermarkets and buy food for them. They’re feeding the kangaroos McDonalds and KFC, corn chips, bread and oats, food they’re not meant to have and it makes them highly aggressive.’

Lewis, who drives tourists from the Morisset train station to the hospital, warns each bus load he takes about not feeding the animals.

Over the last few months he has collected photos of the injuries the kangaroos have inflicted and says more needs to be done to prevent people from feeding them. 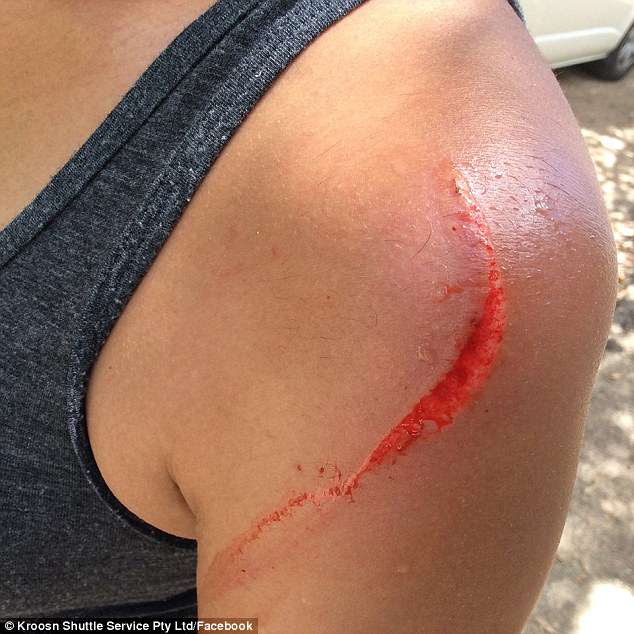 Human food is high in sugar and become additive for the kangaroos. This woman was attacked and had a large gash in her arm

‘If you go out there with food they’re like greedy little kids.’

‘I’ve watched them become very aggressive. They’ll snatch food and if you’re not quick enough they’ll get you. One lady had to have seventeen stitches.’

‘The worst I’ve seen myself is a man with a huge gash in his stomach. I arrived a minute after it happened and he said they hadn’t been feeding them.’

‘They had been to McDonald’s before they came and I don’t know if they still smelt like the food and that’s why, but the kangaroo attacked him.’

‘When they smell something like bread they start jumping around and scratching each other. Their whole body language changes.’ 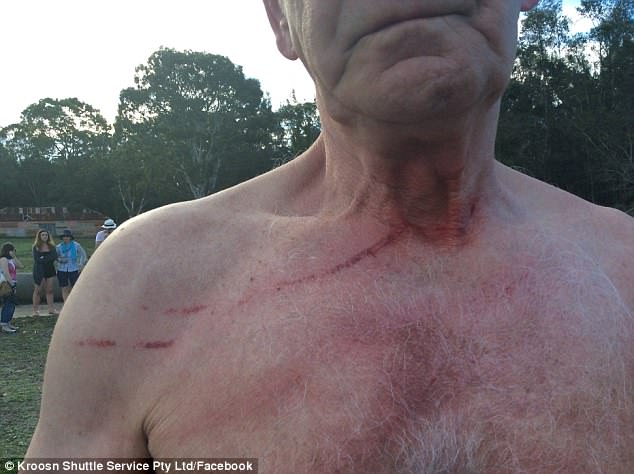 The kangaroos are the number one attraction for the seaside town and the experience has a four star rating on TripAdvisor.

Littered between the glowing reviews of how ‘super friendly!’ and ‘approachable’ the group of kangaroos are, are several the mention the tourist attraction is situated at a psychiatric hospital where patients wander the grounds and that the snacks are killing the wild animals.

‘These are native animals and have a natural diet of local grasses that they feed themselves. Carrots, bread and any other human food slowly kills these wonderful creatures,’ one review reads.

The sugar in fast foods and even even vegetables like carrots is additive to the animals and not only makes them fat and angry but is slowly killing them. 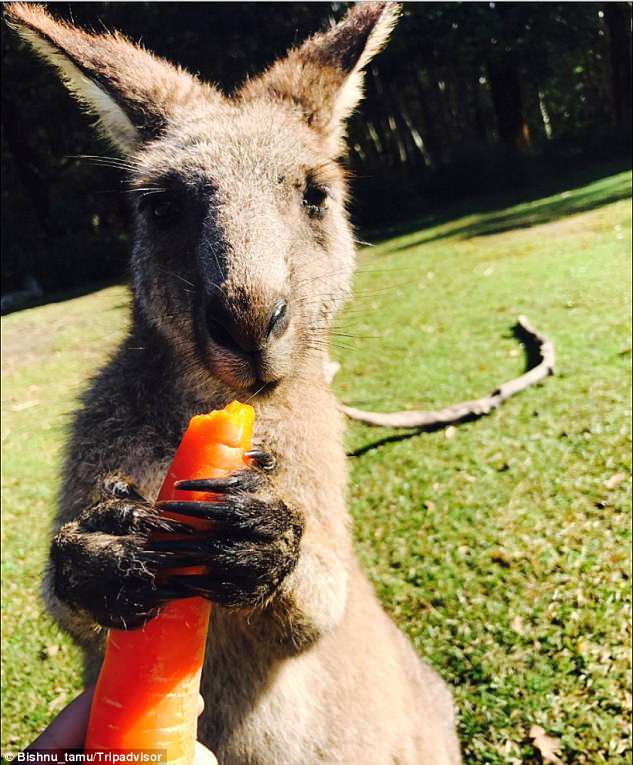 The unnatural diet can cause deadly diseases such as lumpy jaw where the animals get lacerations in their mouths which can become infected.

In an attempt to curb the damage, Lewis is calling for more signage that protects the animals.

‘The tourists don’t realise how bad for them it is.’

‘95% of the ones I take don’t feed them because they’ve been informed. But even yesterday I rocked up and a group were feeding them nuggets, chips and a hamburger.’ 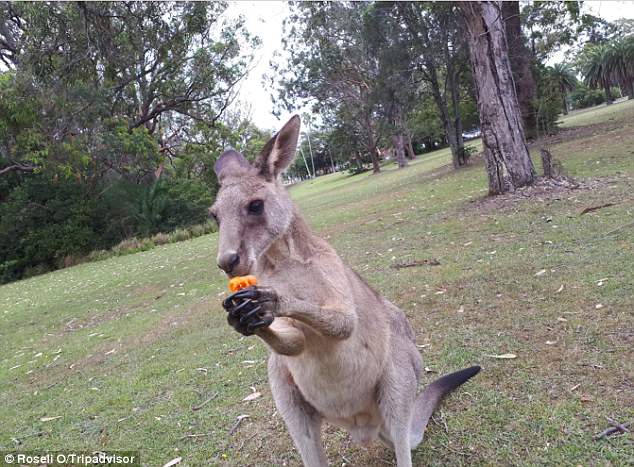 Helping his campaign for more signs in the area is local Lake Macquarie MP Greg Piper who has raised the issue in NSW Parliament.

‘Despite a number of warning signs placed throughout the area, people still come in droves and they feed the kangaroos processed foods,’ he said in parliament.

‘I was there only last week and saw tourists attempting to feed the roos corn chips.’

Lewis says the attraction is too big to be shut down but that it can easily be managed to keep the animals safe.

‘I don’t think it can be stopped but education is key. We care first about the patients, then the kangaroo’s , then the tourists having a good time. It’s just about education.’

UK should have said soft Brexit was inevitable in 2017: chief whip

If You Love Adrenaline-Pumping Thrills Instead of Lazy Beach Days, These 15 Vacations Are For You