Female clubber, 22, says 6ft bouncer punched her in the eye so hard she burst a blood vessel

A female clubber has claimed that a ‘6ft heavyset bouncer’ punched her in the eye so hard it burst a blood vessel.

Her friend then confronted security while they were out at 42nd Street nightclub on Wednesday night for a birthday party.

The 22-year-old, and both her friends, Leon Parsons, 23, and Kieran Bendix, 28, were also allegedly hurt as a male bouncer became ‘aggressive’.

Ms Parsons said she was also punched in the eye by him.

Greater Manchester Police confirmed officers are investigating an assault but have made no arrests. 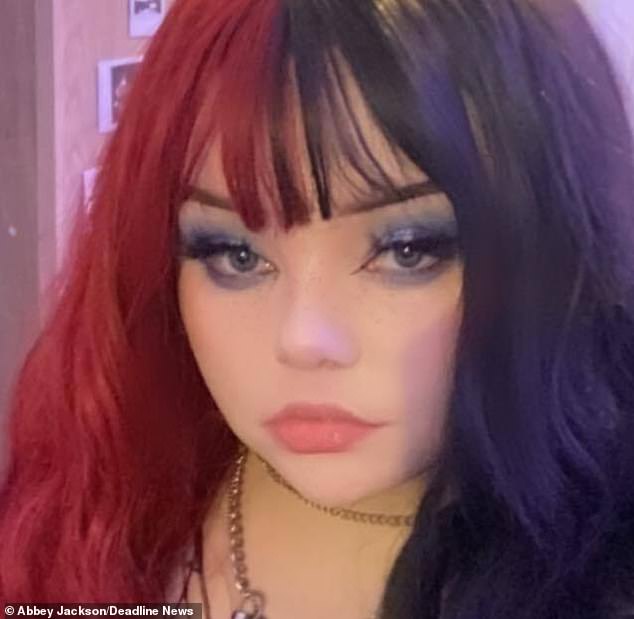 The ‘heavyset’ male bouncer from the club on Bootle Street also allegedly choked Mr Parsons and hit him so hard he had a lump on his head.

She claims her 23-year-old friend tried to record some of the commotion but had his phone taken away by the bouncer and ‘smashed beyond use’.

Ms Jackson, from Hereford, Herefordshire, added: ‘We tried to reason with them but the bouncer kept being aggressive and it turned into him following my friend, shoving him and yelling at him.

‘This bouncer was over 6ft and heavyset mind you, twice the size of me and my friends.

‘When we tried to push him away he started on us and started shoving us.

‘I can’t remember the exact sequence of events because it all happened so fast but he ended up whacking my friend across the face, choking my other friend and hitting him so hard he has a lump on the back of his head.

‘He punched me in the face so hard I thought I was going to pass out, later I found out he popped a blood vessel in my eye.’

She also warned people about the 42 nightclub on Facebook.

‘Last night me and some friends went to 42s as it was two of our birthdays,” she said.

‘We queued up and were asked the usual ‘tickets, NHS pass’ etc and as we were finding it on our phones, two lads pushed in front of us and were let in without showing their NHS pass. 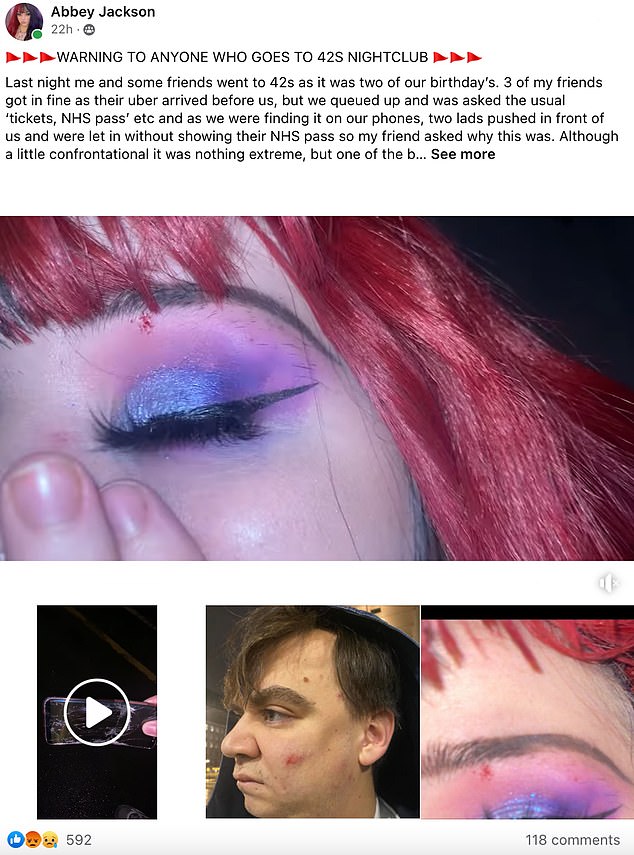 She also warned people about the 42 nightclub on Facebook.

‘So my friend asked why this was. Although a little confrontational, it was nothing extreme but one of the bouncers then gave him attitude and refused him entry, and refused me and the other person entry just by association.

‘It then got completely out of control after the bouncer started squaring up to my friend and pushing him around and following him across the street,

‘When me and my other friend tried to intervene, we were met with the same treatment.

‘What followed was this one bouncer constantly physically assaulting us all, including marking my friend’s face, choking my other friend and banging his head so hard he got a lump, and full on punching me in the eye causing me to bleed, gain a black eye and cause a subconjunctival haemorrhage.

‘Before this, 42s was my favourite club in Manchester but after being verbally and physically assaulted on my birthday by a bouncer I will no longer be returning.’

Locals were left shocked by the incident. 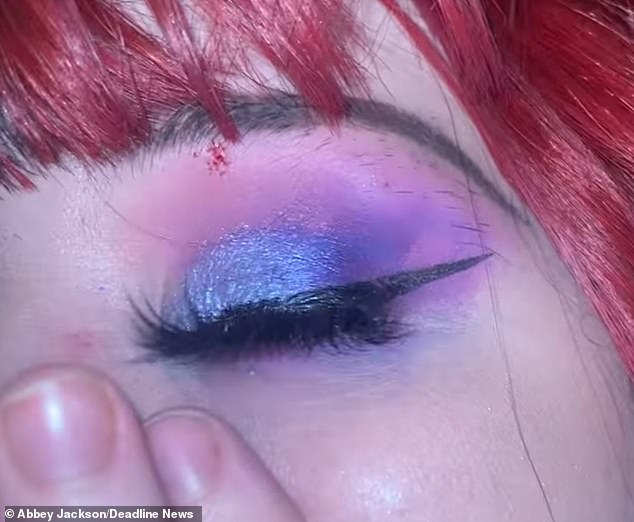 One member of the Facebook group said: ‘The bouncers at 42s are vile, I hope you’re okay!

‘I went to stand outside for five minutes with a friend (they were stood staring at us for the whole five minutes) and then they wouldn’t let us back in to get my things out of the cloakroom.

‘When I tried to walk in, a bouncer pushed me over and all the rest of the bouncers just stood and laughed.’ 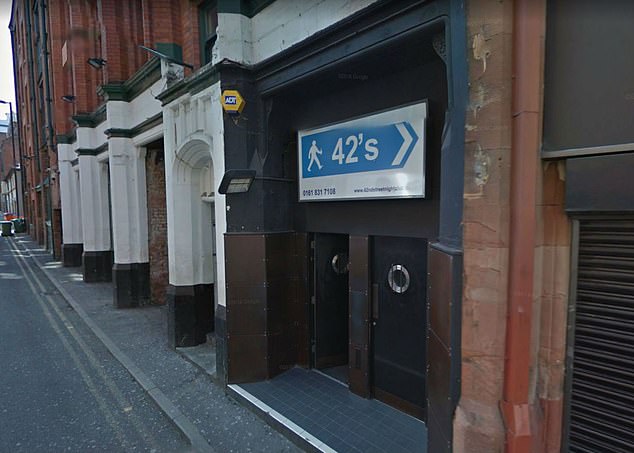 Greater Manchester Police confirmed it’s investigating an assault at Bootle Street, Manchester, where the club is located.  (Image of 42’s)

Another wrote: ‘Absolutely disgusting, he needs catching. I’m sorry guys. I wish you a speedy recovery. The club should tell you his name.’

One shocked local said: ‘The bouncers here are awful. One had a go at me for waiting for my friends to walk down the stairs before I left.

‘We were the only people on the stairs and he screamed at me for just waiting for them to get to the bottom, he was insane.’

And another added: ‘Oh my god I hope you’re okay, the bouncers at 42s are vile.’

Greater Manchester Police said: ‘Police were notified at 12:15pm on Thursday, 23 December to report of an assault on Bootle Street, Manchester, the previous day.

‘The investigation is ongoing and no arrests have been made.’

The 42nd Street night club on Bootle Street has been contacted for a comment by MailOnline.

The truth about The Bachelorette’s Ivan Hall