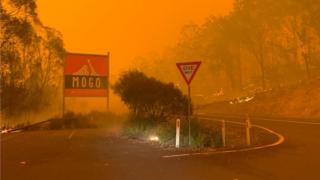 Australia was only just emerging from devastating bushfires when the coronavirus struck, and as the BBC’s Shaimaa Khalil writes, some tourist-dependent towns are now facing a double disaster.

When blazes ravaged the small New South Wales’ town of Mogo on New Year’s Eve, all Lorena Granados could do was flee. She and her husband Gaspar ran through the flames under red skies as the fire destroyed the leather business they owned for nearly 20 years.

All that was left were a few burned and warped sewing machines that they later salvaged from the wreckage.

During the bushfire season, almost 500 homes were lost in Eurobodalla Shire Council, where Mogo is located. In the following weeks, the Business Council of Australia announced it was funding a pop-up mall and erecting 10 temporary buildings in an attempt to give small businesses a chance to start trading again.

Mrs Garandos was getting ready for the big opening when Covid-19 became a global pandemic. Australia closed its borders and tightened its social distancing rules. All non-essential services were closed, which meant that no customers passed through the pop-up mall for weeks. It was another big blow to the small town which depends mainly on tourism.

With some travel restrictions eased, we were able to visit the town, observing distancing rules.

“It’s heart-breaking and soul destroying,” Lorena said. “Our motivation went from a hundred to nothing. We invested money in stock and we had every hope that we were going to have an extremely busy Easter. We weren’t expecting to be stopped in our tracks so early in our recovery process.”

The government has recently announced a package of A$650m ($400m; £210m) to help communities worst hit by the bushfires. It’s the last instalment of a A$2bn recovery fund. But many complain that getting financial support has been a long and complicated process made even more difficult by Covid-19.

Five months after the fires of New Year’s Eve, they both still seemed in a daze as they examined the shattered and blackened pieces of artefacts they were hoping to sell during the Christmas and New Year period. The cleaning up process was hampered first by the floods that came soon after the fires and then by Covid-19 restrictions.

“Everything has been delayed. The workers had to be more careful,” said Peter. “We were really looking for a quick clean-up so we could psychologically start afresh and build our lives again.”

Seeing the destruction every day as he and his wife drive through town has been a constant reminder of what they’ve lost.

With no international tourists expected in Australia for many months, it’s not just small businesses that are in dire straits. Famous attractions like Mogo’s Wildlife Park are also struggling to make ends meet.

The zoo became famous during the fires for its dramatic rescue of its animals as fires approached the town. It had been open again for less than a month before the coronavirus forced it to close again.

“The knockout blow was Covid-19,” said zoo director Chad Staples. “The fires were tough but they were a shared experience. It was something that brought the community together. Covid19 is the exact opposite. We’ve been told to separate and be insular.”

During a busy season the zoo gets at least a thousand visitors a day. Now it’s all but deserted except for the animals and the staff. It costs nearly A$15,000 a month just to feed the animals and they’ve had no money coming in for months.

Chad hopes that the eventual return of domestic visitors, albeit in small numbers, will give them some respite. But he admitted that even with a further easing of restrictions, the feel of the zoo will be significantly different.

“We’re not going to have those days where the zoo is packed with people. It’s going to be almost like private tours, the numbers are going to be that small.”

Australia is in a much better position than many countries when it comes to Covid-19 cases. Restrictions are being eased gradually in bid to reopen the economy. But for people in tourist towns like Mogo who have suffered a double whammy in just a few months, getting government financial support has been a long and draining process

Lorena said that with the government focused almost entirely on keeping Covid-19 under control, bushfire-affected communities felt left behind.

“Many of us have lost homes and businesses,” she said, “but I do feel that we’ve been forgotten about”.

Pence’s ‘Messianic rabbi’ was defrocked 15 years ago for libel

Who is Amanda Holden’s husband Chris Hughes? – The Sun