‘We have Benidorm to ourselves!’: First Brits to head back to Spain on holiday reveal they’re enjoying ’empty’ beaches and beers in the sun as local bars admit ‘without the Brits we’re dead’

British tourists are back in Benidorm – and have got the resort virtually to themselves.

Julie Broom, 61, was one of the first to arrive after boarding a flight to Alicante airport from Leeds Bradford at 9am on Sunday.

Sitting in a bar along the deserted seafront while enjoying a beer in the sun, she told MailOnline: ‘The beach is empty and the whole English strip is closed, so we feel we have Benidorm to ourselves.’

Meanwhile bar owners in the Costa Blanca resort urged other visitors to join them, admitting: ‘Without the Brits, we’d be dead.’ 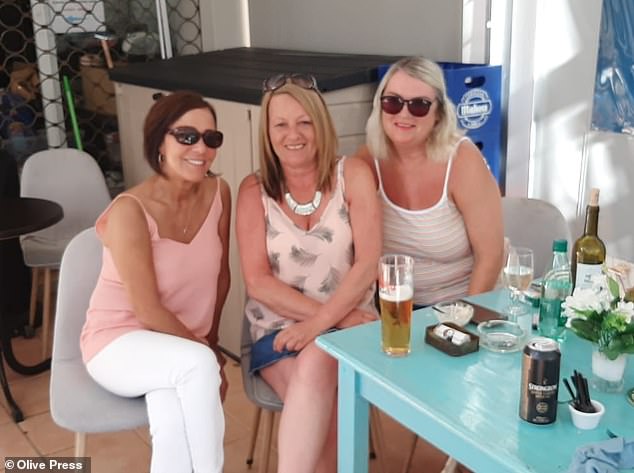 Julie Broom, 61 (centre), Sylvia Riley, 60 (left), and Andrea Harrison, 59 (right), boarded a Ryanair flight to Benidorm at 9am on Sunday – the same day the borders reopened – and say they’ve had the resort town ‘to themselves’ 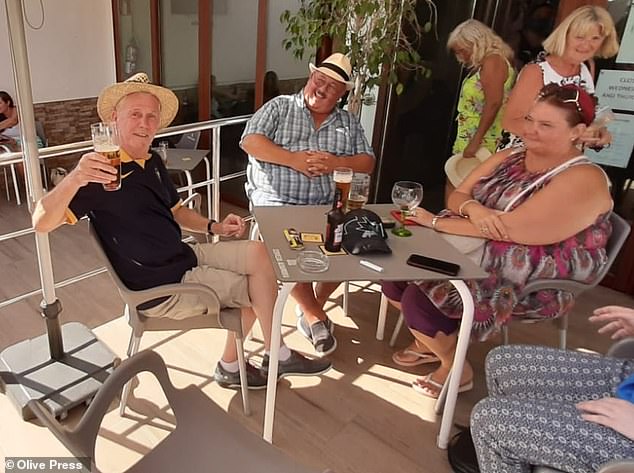 Michael Golden, 69, from Birmingham (left), saw two flights to Benidorm cancelled before he was able to board one on Sunday – saying he wanted to come to Spain as soon as possible because all the pubs in the UK are closed

Julie and friends Sylvia Riley, 60, and Andrea Harrison, 59 – all NHS nurses from Wakefield – said they booked their holiday five months ago, as coronavirus was starting to make headlines but before lockdown.

The trio were expecting their Ryanair flight to be cancelled, but when the airline said it would be going ahead they decided to go ahead with the trip.

‘We’re NHS nurses so we’ve been tested for coronavirus every two weeks – we’re not dicing with death. We just wanted to get away, and we’ve enjoyed it,’ she said.

She revealed there were only 80 people on her flight and Alicante airport itself was deserted – meaning they strolled ‘straight through’.

Temperature checks were carried out at the airport but the group were not asked to fill out any forms, she said.

‘I feel it’s really safe in Spain, because they went into a strict lockdown two weeks before the UK. I think Benidorm is ready for more tourists to come soon,’ she added.

Benidorm is one of Spain’s most popular resort towns, typically welcoming millions of tourists each year – with Briton being the top supplier of visitors.

In any other year it would be beginning its high summer season, with hotels filling up and bars doing a swift trade. 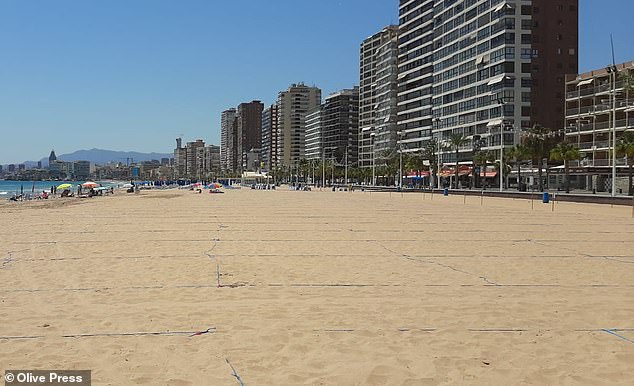 Benidorm – one of Spain’s most popular resort towns – has been all-but deserted for months amid coronavirus lockdowns, but is now starting to reopen (pictured, the beach divided into socially distanced sunbathing zones) 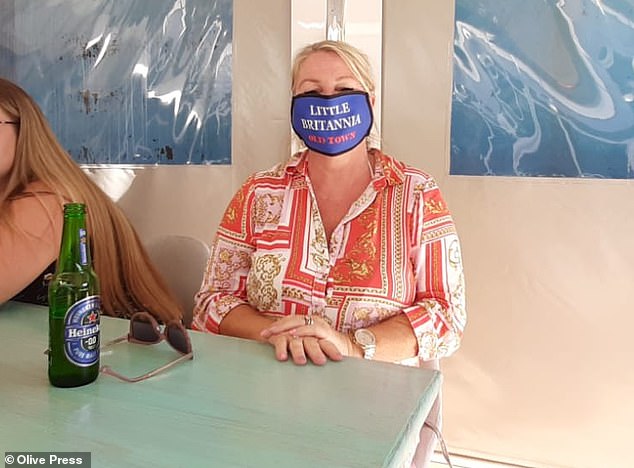 Tracey Walker, an expat bar owner in Benidorm’s old town, urged other Britons to make the trip soon – because ‘without them we’re dead’

But instead the resort is only just emerging from months of forced closures amid coronavirus lockdowns across Europe which also saw tourism effectively banned.

On Sunday, Spain lifted its coronavirus state of emergency including a requirement that all visitors quarantine for 14 days on arrival, and urged visitors to come back.

The British Foreign Office continues to advise against all-but essential travel and UK visitors must still quarantine for two weeks when they get home, but that hasn’t stopped some from making the trip.

Michael Golden, 69, from Birmingham, was another British tourist who took early advantage of the new rules to head abroad.

He said he has been coming to Benidorm for 15 years and flew from Birmingham to Alicante with Ryanair on Sunday.

Birmingham airport was ‘deserted’ and he got through Alicante airport ‘quicker than usual’, he said, but ended up ‘packed’ on to the plane with people sat either side.

While passengers were kept two meters apart at Birmingham airport, they were squeezed close together on a transfer bus from the plane to the terminal on arrival.

He was also forced to take a 90 euro taxi from Alicante to Benidorm since there were no buses running to the town.

Despite that, he said he felt ‘safe’ and was not worried about catching the virus. 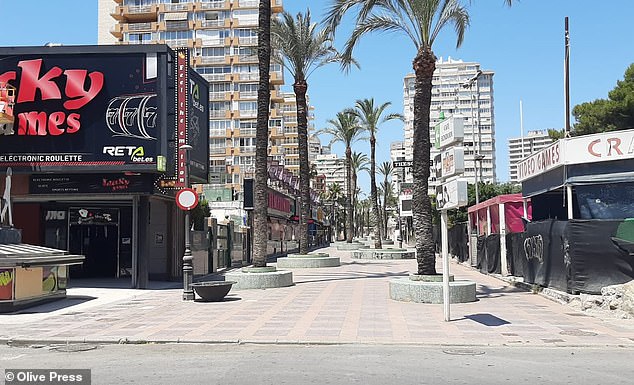 Benidorm typically welcomes millions of visitors each year with Briton making up its largest overseas market, but has been left deserted after tourism was effective banned

‘The pubs weren’t open in England, so when the state of alarm ended I thought I’d try get to Benidorm,’ he said.

He booked his flight just five days before it was due to take off, saying it was the ‘first one he found’ that was scheduled.

He explained that two other flights he booked have already been cancelled, and that he used an airline voucher to pay for the new one.

‘They didn’t ask me to fill out any forms, don’t think they had English versions of it as I was one of the first tourists in,’ he added.

Meanwhile Tracey Walker is the owner of the Britannia Bar in Benidorm’s old town.

She runs the bar with her husband and usually has two employees, with the bar ‘full’ all summer. But now, the business has been deserted for weeks.

They tried opening two weeks ago when domestic tourism restarted but there were so few customers they had to close up again and sell off their stock.

‘We need British tourists back. Without the Brits we’re dead,’ she said.

‘In Spain we have adhered to the state of alarm rules, we’re stayed away from each other and sanitised constantly. We deserve the tourists and we need them back.’ 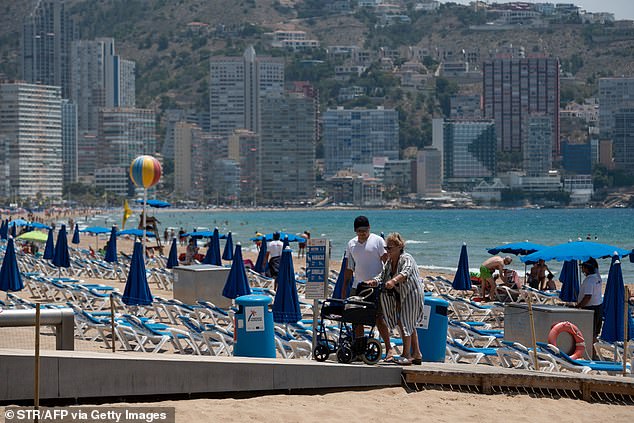 She is now planning for a second reopening on July 3.

Spain is among the countries hardest-hit by coronavirus, with 246,752 confirmed cases of coronavirus and 28,325 deaths.

At one point it had some of the highest daily case and death tolls in the world, but has beaten back the virus after going into full lockdown on March 15.

Ministers began a phased reopening of the economy at the start of May and have now reached the final phase, including reopening the borders.

Leaders across Europe are desperately trying to restart the tourist sector in time for the lucrative summer season, in an attempt to mitigate damage to their economies.

Most major European countries – including Spain, Italy, Germany and France – now allow visitors in freely with no need to quarantine.

But the UK, which did not go into lockdown until March 23 and still has a high daily case toll compared to its neighbours, is continuing to insist that all arrivals – including its own citizens – must self-isolate for 14 days on arrival.

That has made foreign tourism difficult or impossible for many, especially as workplaces reopen following months of working from home.

The rumours around Prince Philip won't go away, says biographer

New Hollywood Podcast: Amandla Stenberg Talks ‘The Hate U Give’, Code Switching And Using Your Voice