Five cruise ships have been detained in UK docks after trapped crew went on hunger strike over unpaid wages amid coronavirus.

The Maritime and Coastguard Agency boarded six ships docked in Bristol and Essex on Friday amid reports of late pay and expired contracts.

Athens-based Global Cruise Lines limited own the five ships that were seized but they are operated by British firm Cruise & Maritime Voyages.

Coronavirus lockdown meant many crew members couldn’t return home despite being on board for more than a year in some cases. Most European workers have been sent home.

A ‘number of expired and invalid Seafarers Employment Agreements’ have caused problems for the shipping company.

‘Our crew have endured a prolonged period quarantined on board our ships during lockdown and are understandably anxious and distressed,’ Mr Verhounig said, adding that many were unable to fly home. 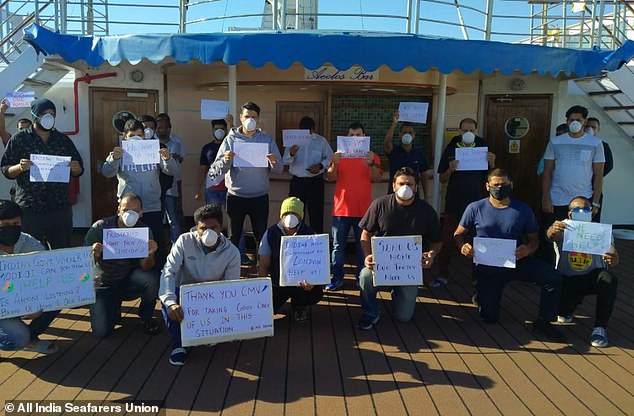 The All India Seafarer and General Workers Union wrote to the Indian foreign office earlier this week. The letter said 164 Indian crew members on board Astoria have been ‘stuck in foreign waters for the past 90 days and need help’. Pictured, trapped crew hold up signs

A sixth ship, the Magellan, was inspected but not found to have any significant deficiencies.

After its inspection the MCA said: ‘Surveyors found a number of expired and invalid seafarers employment agreements, late payment of wages and crews who had been on board for over 12 months. All these are in breach of the Maritime Labour Convention and the ships have been detained for that reason.’

The All India Seafarer and General Workers Union wrote to the Indian foreign office earlier this week. The letter said 164 Indian crew members on board Astoria have been ‘stuck in foreign waters for the past 90 days and need help’.

Some workers have gone on hunger strike in an effort to force the Indian government to bring them home, it has been claimed.

The ship’s owner said 50 out of 262 crew members had ‘commenced a strike, including no longer performing routine maintenance work on board’. He denied the existence of a hunger strike.

One Astoria crew member has died from ‘natural causes’, believed to have been a heart attack.

It is believed there are also crew from Indonesia and Myanmar, some of whom will be flown home on Sunday.

Astoria had been due to set sail for Portugal, but will stay where it is until the problems have been resolved.

Transport Secretary Grant Shapps said: ‘The welfare of seafarers is of the utmost importance and we take any reports of safety concerns around crew incredibly seriously. 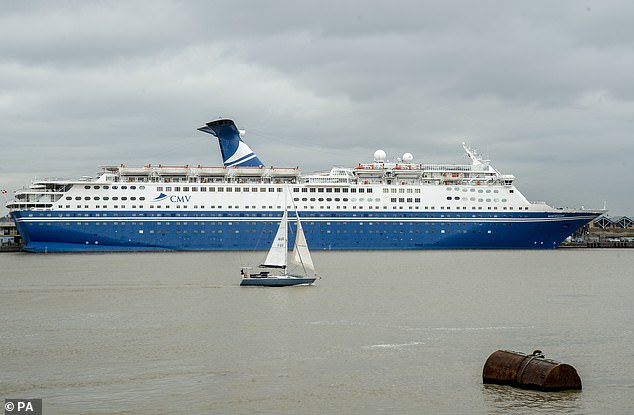 Athens-based Global Cruise Lines limited own all five ships being kept in Bristol and Essex docks over expired contracts. Pictured, the cruise ship Magellan at Tilbury Docks in Essex, which has not been detained as no significant deficiencies were found

‘Following today’s investigation, five ships have been detained and we will not hesitate to continue to use every power within our control to safeguard the health and happiness of every seafarer currently working in the UK.’

Shipping records show the Astoria sailed from Manzanillo, Mexico, in mid-February and arrived in Poole, Dorset, on March 10. It left Dorset on March 14 and arrived in Tilbury the next day, where it remained during lockdown.

Columbus sailed from Malta to Tilbury. The Magellan arrived at the Essex port from Reykjavik, Iceland. Both have been there since April.

The Astor, which sailed from Bremen in Germany and the Vasco de Gama from Cape Town in South Africa, have both been at Tilbury since May.

The Vasco de Gama had dropped off Australian passengers at the end of March on Rottnest Island so they could quarantine for 14 days before being allowed on the mainland.

The Marco Polo arrived at Avonmouth Docks on 22 March from Aqaba in Jordan.

Director of Maritime Safety and Standards Katy Ware said, ‘This sends a very clear message that crew welfare remains a top priority for us both as a Flag and a Port State.’

‘We must care for the well-being and health of our seafarers who work so hard in the industry.’

'The Bachelor': Does Clayton Echard Find Love in His Season?

Are garden centres open in lockdown 3? – The Sun

25 Cities Where the Middle Class Is Thriving