The death of a gentle giant: Young elephant dies after being shot by a hunter despite two-day battle to save him when he was found badly wounded in Thailand

This is the heartbreaking moment a young elephant collapsed and died after being shot multiple times in Thailand.

The five-year-old wild elephant was found suffering at least five gunshot wounds on the outskirts of Kui Buri National Park, in the south of the country, on May 29.

Medics tried to save the animal by washing and plugging the wounds, administering antibiotics, then hoisting him up using a winch so he could eat. 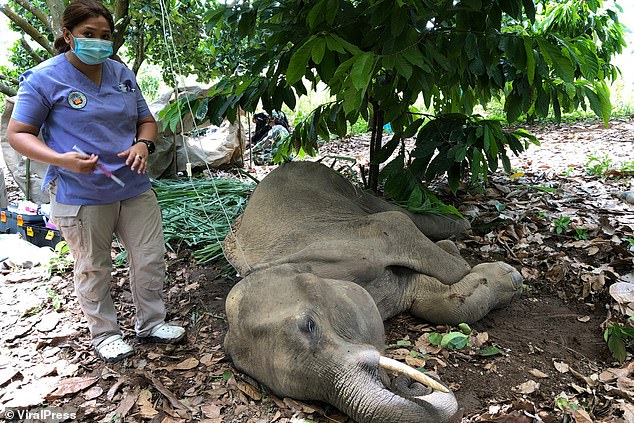 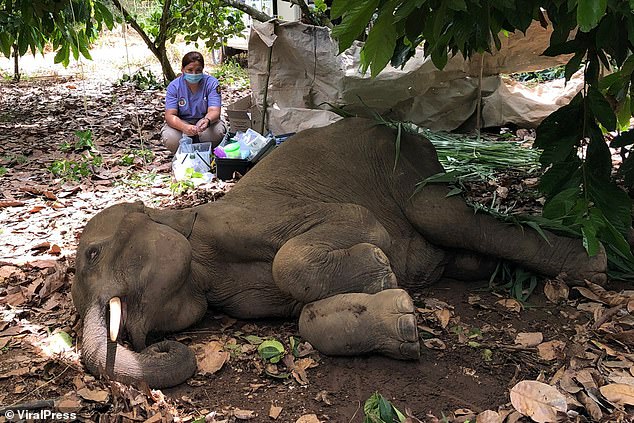 Police say the elephant had been shot at least five times, probably with a shotgun, and had two piece of metal lodged inside its body – one of which ruptured its large intestine

Video captured the elephant chewing on palm fronds and green bananas while doctors stood around assessing his progress.

But his condition slowly deteriorated and he eventually collapsed, writhing in pain.

Medics were filmed giving him painkillers and inserting drips into his ear to give him antibiotics and food, but they could not save him.

The elephant eventually died on March 31, two days after he was found.

Scans and tests have since shown at least two metal objects lodged in his body, local station INN News reports, one of which ruptured his large intestine.

He was also suffering from parasitic worms which had infected his liver and stomach, causing him to be emaciated. 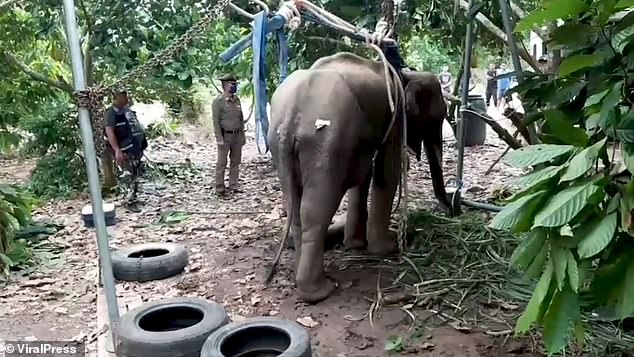 Medics spent two days treating the animal, disinfecting and plugging its wounds with gauze and using a winch to pull it upright so it could eat (pictured) 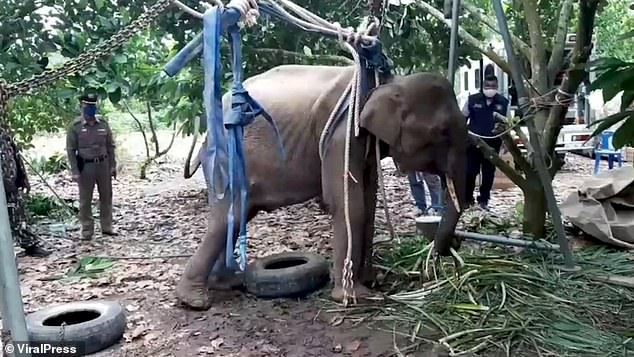 The elephant was found around half a mile outside a national park where the animals are allowed to roam freely.

Police believe the young male – driven by hunger – wandered out of the park and into a jackfruit farm, where he was shot.

National Park director Pichai Watcharapongpaibul said: ”The elephant was seriously exhausted and could not stand up or move so he was treated at the scene and monitored closely.

‘We don’t know how long the bullets had been inside the elephant’s body or what type of gun they came from as an autopsy must be performed.’

He said National Park staff will start an investigation to find the hunter who shot the elephant, which is believed to have been in retribution for damaging farm land. 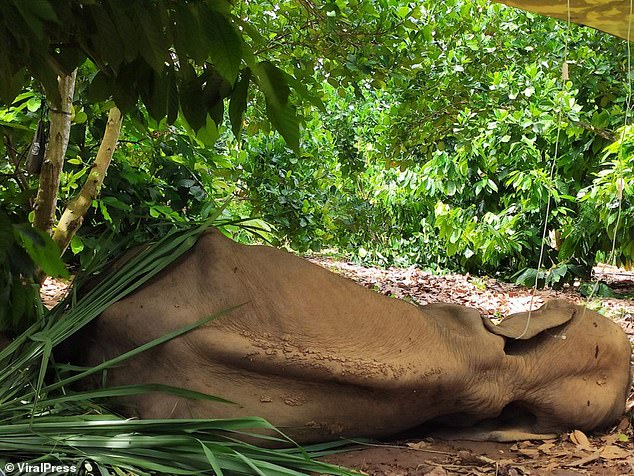 Medics used IV drips to pump antibiotics and painkillers into the animal’s system in an attempt to save him, but he died after a two-day battle. An investigation has been launched

He added: ‘Initially, we will ask the locals living nearby whether they have seen this elephant before or if anybody was angered by the elephants.’

Hunting wild elephants has been illegal in Thailand since 1992.

Anyone caught hunting or killing the animals can be fined up to £1,000 or jailed for four years.

There are thought to be 320 Asian elephants living wild in the park, which covers 374 square miles and stretches across the border into neighbouring Myanmar.

Only 25% of COVID-19 vaccines distributed have been administered

Biker rides mini-motorbike down a dual carriageway with a child

Cheese firm slashes prices after stock back-up due to Covid