About 17,000 Victorian homes and businesses still without power six days after a deadly storm lashed eastern parts of the state.

Energy providers are reporting difficult terrain, particularly in Traralgon, where tree roots have been compromised by floods and even mild wind continues to knock trees over.

Authorities also fear more rain could flood a mine and limit the operation of the Yallourn power station. 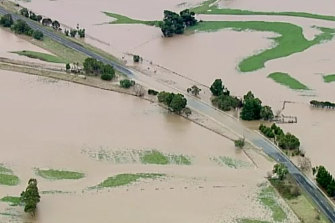 Aerial stills show floodwaters in the town of Yallourn.Credit:Nine News

Ms D’Ambrosio said water levels in the area were concerning. “So all of the focus has been on trying to identify the issues of stability of the mine so that they can put in place engineering solutions.”

The mine is operating at lower megawatts than normal and future flooding can affect the capacity to generate power.

The Gippsland region is also affected but not as severely. 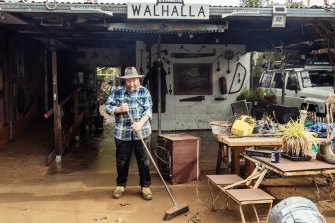 Les Davidson sweeps water in the front yard of his Traralgon home.Credit:Blake Bourne

AusNet spokesperson Helena Lilley says staff have been working overtime to switch the power back.

“We’ve got additional crews here and more coming from New South Wales, so we’re working around the clock. We’re doing everything we can to get the power back as quickly and safely as possible,” Ms Lilley said.

“There’s more bad weather on the way around Traralgon because the ground is soggy,” she said. “Tree roots are also soggy and it doesn’t take much wind to knock them over, it’s creating more difficult conditions.”

Low clouds had also hindered efforts, she said. “We’ve had helicopters trying to fly over Strzelecki Ranges but misty rain and low clouds made that difficult, but we made a bit of headway yesterday and we’ll be up again this morning.”

“We’re very well off at our house because our neighbour has a very powerful generator and is generously sharing with us,” Ms Christian said. “But yeah, not so well for the rest. A lot a struggling along without [generators],” she said.

“Some people are leaving to go and stay elsewhere but the majority are sticking to it and toughing it out.”

Ms D’Ambrosio said a financial compensation scheme for power outages would be announced. “We’re talking about hundreds of dollars rather than thousands but it all depends on how many hours [each household is out of power].”

Victoria SES agency commander Mark Cattell said they have received “well over” 9000 requests for assistance since the storms began on Wednesday.

He said many roads are still difficult to reach. “In the Dandenong Ranges in particular, there’s still a significant number of roads closed.

“Our [SES] crews, roads, power crews and councils are working diligently to try to get access to those communities,” he said. 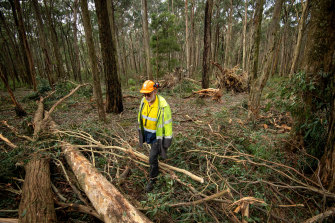 Animal rescuer Manfred Zabinskas at his property in Trentham with some fallen trees after the storm from last week.Credit:Eddie Jim.

“We do have some access to some communities but it’s not main road access, it’s barely enough room for cars.”

Mr Cattell said power companies have an enormous task clearing the wreckage and the fallen trees.

“Unfortunately the size and the complexity of some of these trees which have come down, they really require specialist arborist and large machinery, and then to the management teams of sources,” he said.

The SES is now preparing for more rain.

“We’ve got some more weather coming up on Thursday, Friday, but we’re not going to see hopefully the level of impact that we did last week,” Mr Cattell said.

Trump says US troops to get out of Syria 'very soon'