But the firm was told neither police nor Kirklees Council could do anything as it occurred on private land.

Video shows men throwing mattresses, foam and bedding parts on the ground after arriving at site in a van on July 1.

The cameras captured the van’s registration as well as the identities of those involved. Though West Yorkshire Police won’t act, the council has now said it will investigate. 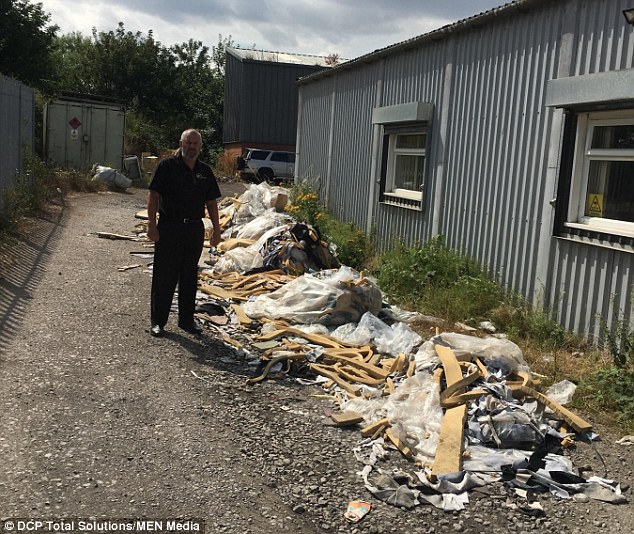 David Lowles (pictured) found this outside his CCTV business, which operates from the warehouse

David Lowles, a director at DCP Total Solutions, said all the waste appeared to be linked to a bed manufacturing company.

And he said the individuals who dumped it seemed to have targeted what they thought was a blind spot in the industrial estate’s security systems.

‘It seemed like they knew where they were going,’ he said. ‘We’ve got cameras on view around the building but the one that’s filmed the incident is hidden.

‘They must have known the area as they’ve gone straight there and thought that they weren’t on CCTV.

Who to call in cases of fly-tipping

If you wake up to the sight of rubbish that has been fly-tipped, the proper response is to call your local council, not the police.

The police will only prosecute if they catch tippers in the act and so you should call 999 if you see it taking place before you.

If you are calling a council about fly-tipping after it has taken place, then they can take the matter to court.

But if rubbish is dumped on private land, the local authority is not required to remove it and the responsibility rests with the landowner.

Victims should contact the Environment Agency if the waste is more than 20 tonnes, more than 5 cubic metres of fibrous asbestos or 75 litres of potentially hazardous waste in drums or containers.

If the waste is linked to crime or organised crime than it should also be reported to the Environment Agency.

‘We were flabbergasted when we saw it. The amount of stuff they’ve dumped is unbelievable.

‘The high-top van was packed to the rafters.

‘The first thing we did was review the CCTV and we thought “hallelujah”, we’ve got the van and the registration plate on camera so it’ll be an easy job for the police to collar them.

‘But it didn’t turn out that way and when the police turned up a week later we found out it’s not a police matter.

‘We contacted the council and they said they couldn’t do anything so we thought we were in a stalemate.

‘The council has now come, perhaps as the video has been on Facebook, and they’ve said they’ll look into it.

‘But they still can’t clear up the mess – that’s something we’re going to have to pay for.’

The video has been viewed and shared hundreds of times on social media in a bid to help identify the suspects.

If Kirklees Council finds the culprits it can prosecute them in court and they could be fined.

Mr Lowles may be able to recoup his clear-up costs from the council at that point.

Joanne Bartholomew, Kirklees Council’s service director for commercial, regulatory and operational services said: ‘The council is aware of this incident and are investigating.’