Former Italian president Silvio Berlusconi, 84, is back in hospital, his lawyer reveals blaming ‘health problems’ months after he was struck down by Covid – as corruption trial begins

Silvio Berlusconi has been in hospital since Monday, his lawyer revealed today as the former Italian Prime Minister went on trial for corruption.

Federico Cecconi told a judge in Milan the 84-year-old is suffering from ‘health problems that I will not go into’ as he justified his absence from the courtroom.

He added that Berlusconi is currently at San Raffaele hospital on the outskirts of the city, while a source from his Forza Italia party said he will need to rest ‘for a while’. 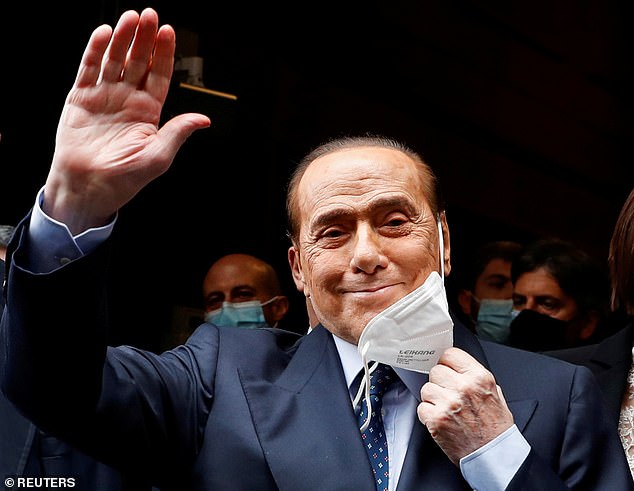 Silvio Berlusconi, 84, has been in hospital for the last three days suffering from ‘health problems’ and will need to rest ‘for a while’, his lawyer said today

No further details about Berlusconi’s health problems were disclosed, but news he has been hospitalised comes six months after he was diagnosed with Covid.

While most coronavirus patients recover from the infection within a few days, some are left with symptoms lasting month – often referred to as ‘long Covid’.

He also revealed in 2000 that he had been diagnosed with prostate cancer three years previously, but had been cured.

At the time he described his cancer battle as ‘a nightmare lasting months’.

Berluscnoi’s trial has been delayed multiple times due to health issues, with one delay coming in January after the former PM was taken to hospital.

The death of lawyer Mauro Ruffini, who had been involved in prosecuting the case, also held up the trial while he was replaced, Repubblica reported.

And evidence due to be given today by former prime minister Giuseppe Spinelli was delayed after he filed an ‘impediment request’ and asked to come back to court at a later date.

Berlusconi is on trial alongside 28 other defendents over money he is alleged to have paid to host ‘bunga bunga’ parties.

The former Prime Minister is accused of paying £6million to an underage prostitute dubbed ‘Ruby the heart-stealer’.

These 21 Throwback Photos of Birthday Boy Christopher Meloni Are So Good, They Should Be Illegal