London 2012 torchbearer, 53, who was exposed as a paedophile after vigilantes snared him trying to meet a 14-year-old girl at a rail station with pizza, Viagra and flowers is spared jail

A London 2012 Olympic torchbearer who believed he was meeting a 14-year-old girl for sex after he brought flowers, pizza and Viagra to their railway station meet-up has been spared jail.

Paul Drake, 53, was snared by paedophile hunters who posed online as a young girl called Claire who made it clear she was an underage virgin willing to travel from Bournemouth to Scarborough to meet him.

Drake, who was chosen to carry the Olympic torch in the run-up to the London 2012 games because of his charity work at Tesco, intended to take her back to his home for sex.

He even turned up with a bunch of daffodils and a pizza after an online chat about her favourite things as well as a ‘blue tablet’, thought to be Viagra, for himself.

But he was confronted by vigilantes at Scarborough Railway Station in March in ‘one of the most spectacular falls from grace that it’s possible to imagine’, York Crown Court heard. 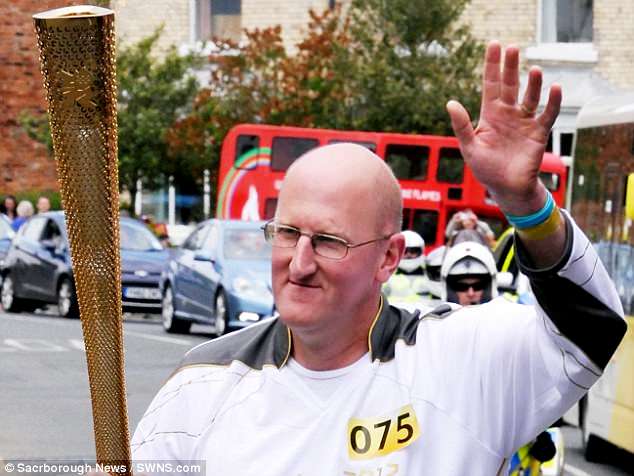 Paul Drake, 53, was snared by paedophile hunters who posed online as a young girl called Claire who he believed he was meeting for sex

Drake was further humiliated when his work colleagues turned up for a train coincidentally just as the ‘paedophile hunters’ exposed him and he was later sacked.

Police were called and he was arrested on suspicion of a series of child sex offences including attempting to incite a child to engage in sexual activity and attempting to meet a child following sexual grooming.

Drake admitted the offences and was given a four-month suspended prison term at York Crown Court on June 8.

He was snared after messaging what turned out to be an undercover decoy posing as a 14-year-old child online called ‘Claire’.

His arrest on March 24 this year has led to the breakdown of his marriage, he was sacked on the spot by his employers and could lost his home, his defence team said.

Prosecuting, Jonathan Sharp told a court Drake had been on an adult chat site when he spotted the profile of a ‘young woman named Claire’.

He said: ‘The defendant sent a message to the supposed ‘Claire’ and she responded.

‘It was at that stage that “she” said she was 14 and was living with her mum in Bournemouth.’

Within days, Drake ‘turned the conversation towards sexual matters’ despite believing the ‘girl’ to be 14.

‘He asked if he could text her about ‘rude things’ and within a day or so the text conversation progressed to him asking ‘her’ to visit him at his home address in Scarborough,’ he added.

‘He explored with ‘her’ the fact that she was a virgin and wholly sexually inexperienced.’ 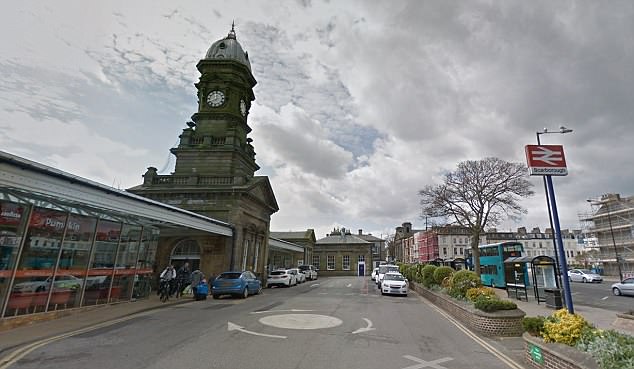 Drake arranged a ‘rendezvous’ at Scarborough Railway Station after the ‘girl’ said she was staying with her grandmother in Harrogate.

The vigilante group pounced and ‘established (Drake’s) identity, which wasn’t difficult because he had been using his own name and his own photos on the messaging service’, said Mr Sharp.

They called police and live-streamed the scenes on Facebook.

Mitigating, David Camidge said that since his arrest, the charity fundraiser had endured ‘one of the most spectacular falls from grace that it’s possible to imagine’.

He said were it not for the fact that the ‘girl’ didn’t exist, Drake would have received a prison sentence ‘measured in years’ because his intention was to take the ‘girl’ back to his home and have sex with her.

He spared Drake a prison sentence because he had no previous convictions, there was never any risk of harm to the fictitious child and the offences were ‘out of character’.

Drake was placed on the sex-offenders’ register for 10 years.

He must also complete a sexual-offenders’ programme and was made subject to a sexual-harm prevention order which will restrict his internet use and contact with females under 18.

Drake took the torch through Filey on June 18 as part of the 2012 London Olympic Games.

He was nominated by a colleague at Tesco after long-standing fundraising for the company’s charities of the year.

These have included children’s cancer charity CLIC Sargent, the Muscular Dystrophy Campaign and most recently, the Alzheimer’s Society.

Why are countries banning Huawei?

Bodybuilding grandmother, 68, is chatted up by ‘weedy men’ online