Cling Kong! Four-month-old baby gorilla holds tight to mum as he prepares to face the public for the first time when Bristol Zoo reopens next week

This is the adorable moment a tiny gorilla clings to its loving mother as the primate carries it around her enclosure.

The four-month-old western lowland gorilla was born at Bristol Zoo Gardens in December during the national lockdown.

Members of the public will be able to see the infant for the first time when the zoo reopens its gates to visitors on Monday.

The gorilla does not yet have a name but staff are set to vote on its moniker this week ahead of the zoo’s opening.

It took zoo staff a while to work out what sex the infant was as mother Touni held it so close in the early months. 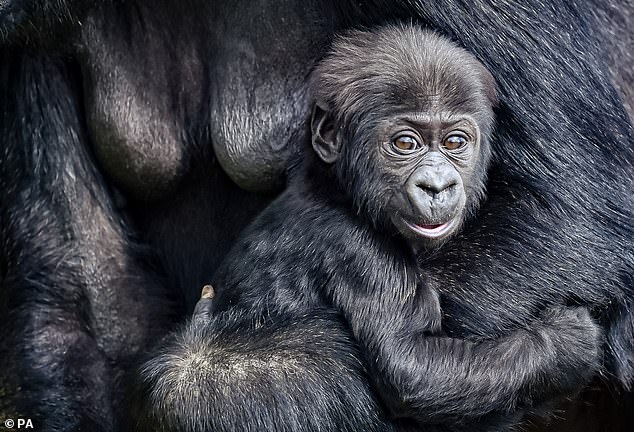 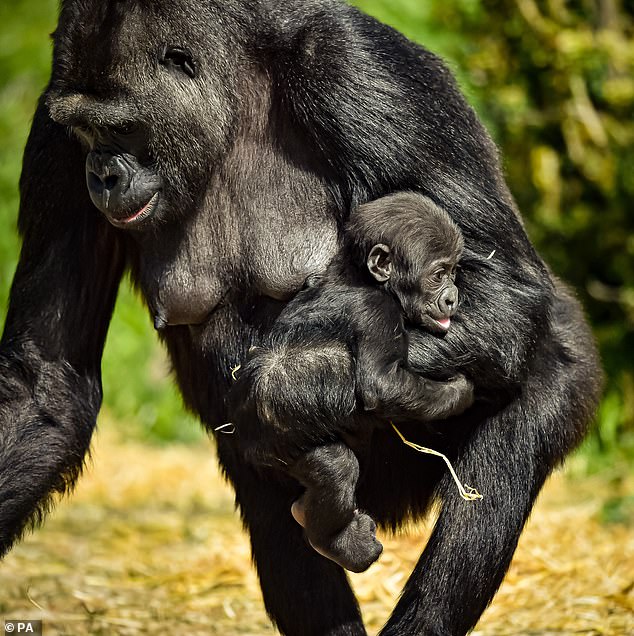 Adorable photos show the baby boy, which has not yet been named, clinging fast to its mother Touni 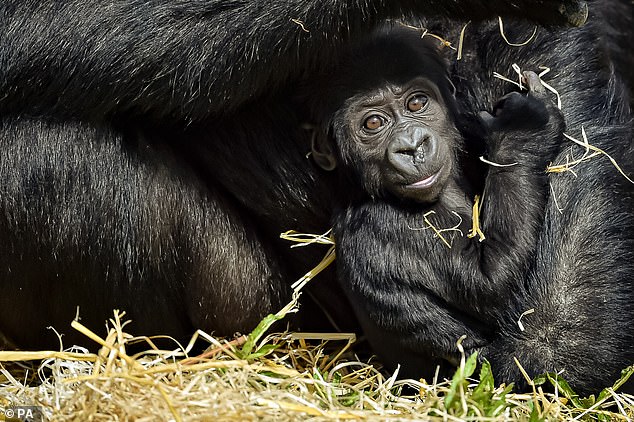 ‘He’s developing well and is increasingly alert, and is showing more interest in food and playing with his family membersaround him.

They added: ‘He is also enjoying the sunshine out on gorilla island as the weather gets nicer.’

Bristol Zoological Society, which operates both Bristol Zoo Gardens and the Wild Place Project, is part of an internationally important breeding and conservation programme.

For more than 20 years, the society has supported a sanctuary in Cameroon that helps look after orphaned gorillas and chimpanzees.

The as yet unnamed infant was the second baby gorilla to be born in less than six months at the zoo.

Mum Touni gave birth naturally overnight to the infant, with dad, Jock, and the rest of the family troop nearby.

It is 13-year-old Touni’s second baby. In April 2017 she gave birth to Ayana, who still lives at the Zoo.

The new infant was born just four months after another gorilla, ten-year-old Kala, gave birth to Hasani – currently being hand-reared by keepers after Kala struggled to care for him. 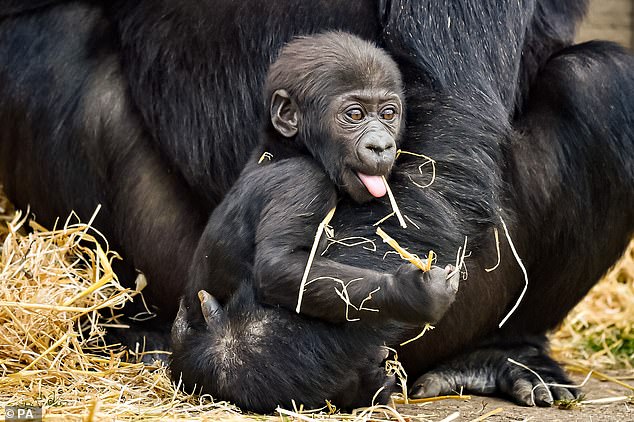 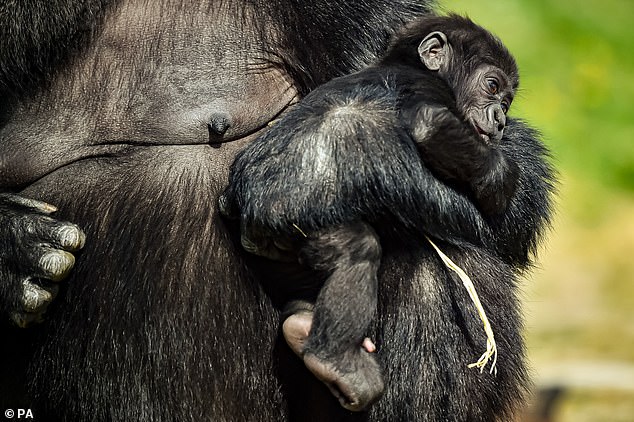 Bristol Zoological Society, which operates both Bristol Zoo Gardens and the Wild Place Project, is part of an internationally important breeding and conservation programme 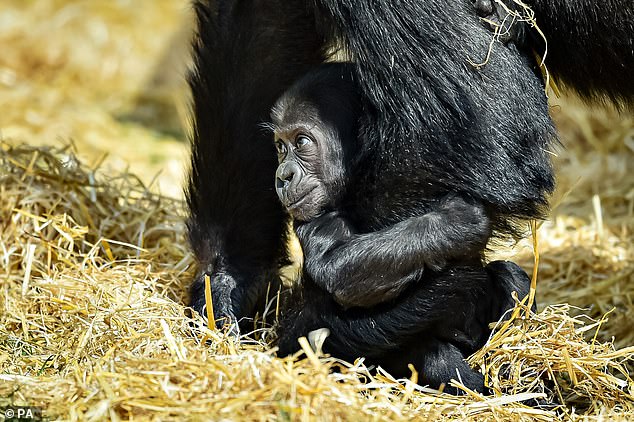 For more than 20 years, the society has supported a sanctuary in Cameroon that helps look after orphaned gorillas and chimpanzees

The zoo spokesperson continued: ‘It’s nice to see him growing up within the family group at Bristol Zoo as there are two other youngsters alongside him, aged three and four.

‘It’s a nice way for those two to learn good mothering instincts from the mother in the group.

The exact number of gorillas is not known because they mostly inhabit dense and remote rainforests in Africa.

However, significant populations do exist in isolated swamps and the remote swampy forests of the Republic of Congo.

Western lowland gorillas are slightly smaller than their counterparts, with brown-grey coats and auburn chests.

They also have wider skulls with more pronounced brow ridges and smaller ears.

Numbers of the gorilla have declined in recent years due to poaching and disease, with populations dwindling by 60 per cent over the last 25 years.

‘They’re learning from the Touni how to be a good mum’.

Western lowland gorillas are critically endangered primates from Cameroon, in the west Central Africa region. Many wild gorillas are shot by hunters for the bush meat trade which thrives in towns and cities.

Bristol Zoo Gardens is actively involved in ensuring there is a strong population in human care.

Lowland gorillas, which can weigh up to 400lb as adults and stand up to 6ft tall, are usually not aggressive – unless disturbed.

Nigel Simpson, Head of Animal Collections, said: ‘It is important in helping to safeguard the future of western lowland gorillas, which are Critically Endangered in the wild.

Nigel said: ‘Touni is an excellent mother and she is taking very good care of her baby. All the early signs are positive and the baby looks to be strong and healthy.’

The new gorilla joins the troop of seven others at the Zoo, which are part of a breeding programme to help safeguard the future of western lowland gorillas.

Gorillas are hunted for their meat and their young are regularly taken and sold as pets, often only to end up abandoned or dying of starvation.

Visitors should be able to see the new gorilla as they pass through the Gorilla House or look onto the Gorilla Island outside.

Bristol Zoo Gardens is one of several outdoor attractions to reopen to the public on Monday in line with the government’s road map out of lockdown.

Legoland Windsor, Thorpe Park, Alton Towers, Chessington World of Adventures and London Zoo are all set to welcome visitors once more from April 12, but with various safety measures to make them ‘Covid-secure’.

Some sites are also limiting ticket sales to six to avoid people breaching the ‘rule of six’ outdoors.