Four more people have been arrested and police have carried out further raids in connection with the death of Newborough man Jarrad Lovison.

A total of five people are now being held as part of the investigation into the suspicious disappearance of Mr Lovison, whose body was found in bushland in Moondarra in May. 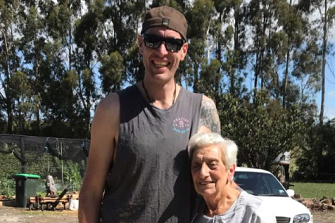 Jarrad Lovison’s body was found at Moondara on May 23 following extensive appeals for information.Credit:Victoria Police

A fourth man, aged 55 and from Tanjil South, was also arrested and a search warrant was executed in Adam View Court after his arrest.

Police are expected to execute further warrants throughout Wednesday.

Ms Guillerme was charged with murder on Tuesday and appeared at Latrobe Valley Magistrates Court, where she has been remanded in custody to reappear in January.

Court documents show she is accused of murdering Mr Lovison in Moondarra on April 16.

Police said on Tuesday a white Toyota had been seized as part of the investigation and would be forensically examined this week.

Mr Lovison disappeared from the side of Moe-Walhalla Road during the early hours of April 16.

His body was found on May 23 following extensive appeals for information.

Jarrad Lovison entering Woolworths shortly before he disappeared; and the bike he was seen riding.Credit:Victoria Police

John Lovison said his family was "living in hell" not knowing what had happened.

But in early October they said further investigations had uncovered a new sighting that led them to believe Mr Lovison was still alive at 3am the next day, riding his bicycle to meet an "associate" on Moe-Walhalla Road.

Detectives are also investigating a reported sighting of his green bike propped against a tree on Becks Bridge Road, north of Adam View Court, about 2.30pm on April 18.

Anyone with information is urged to contact Crime Stoppers on 1800 333 000 or submit a confidential crime report at www.crimestoppersvic.com.au

The most important news, analysis and insights delivered to your inbox at the start and end of each day. Sign up here.

The 4 Best Resistance Bands For Travel