France could be added to travel red list: Boris Johnson warns of border crackdown amid fears over rising cases of South African and Brazilian variants

Tougher border measures could be introduced ‘very soon’ as part of a crackdown on arrivals from France, the Prime Minister said yesterday.

Ministers were ‘looking at’ adding the country to the travel ban red list and forcing French hauliers to take Covid tests on arrival in the UK, Boris Johnson said.

He added that stricter measures may be needed because rising cases of the feared South African and Brazilian variants are ‘an issue of concern’.

The admission came during a grilling in the Commons by MPs on the cross-party liaison committee.

Yvette Cooper, chairman of the home affairs committee, quizzed the PM on why France has not been added to the red list of countries, from which travellers have to enter hotel quarantine on arrival. She also pushed him on why hauliers arriving from there are not tested when data shows France is seeing up to 3,000 cases a day of the new variants. 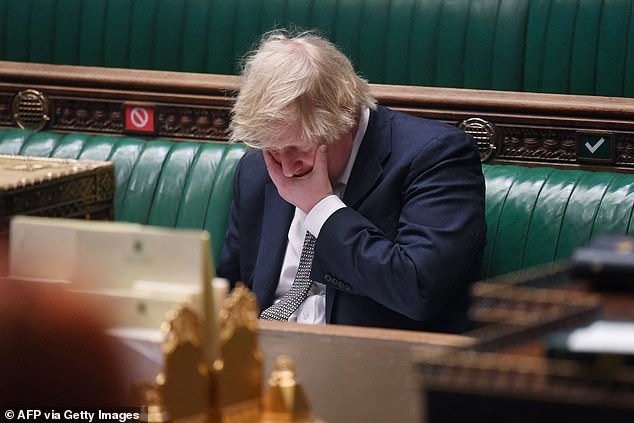 Ministers were ‘looking at’ adding the country to the travel ban red list and forcing French hauliers to take Covid tests on arrival in the UK, Boris Johnson said

By Rebecca English Royal Editor for the Daily Mail

It’s a destination many Britons can only dream of for a summer holiday amid Covid restrictions.

But official duties took Prince Charles and wife Camilla to Greece last night. They wore face coverings as they landed in Athens with Camilla’s featuring her husband’s feathers emblem with the German for ‘I serve’.

Their two-day visit is to mark Greece’s 200th anniversary of independence from Ottoman rule.

Charles, whose father Philip was born a prince of Greece and Denmark, later told Greeks they ‘can count on’ UK friends.

Mr Johnson said: ‘I’m afraid we can’t rule out tougher measures and we will put them in if necessary.

‘And yes, if it’s necessary to bring in testing [for hauliers] then we will do so.’

However, he warned that tighter controls would cause ‘very serious disruption’ to the supply of medicines and food into the UK.

Mr Johnson told the MPs: ‘There is a balance to be struck, and what we don’t know is the exact state of the efficacy of the vaccines against the new variants.

‘We have to balance that against the very serious disruption that is entailed by curtailing cross-Channel trade.

‘We will take a decision – no matter how tough – to interrupt that trade and interrupt those flows if we think it’s necessary to protect public health and to stop new variants coming in.

‘It may be that we have to do that very soon.’

Hauliers leaving the UK for France have been required to take Covid tests before departing since Christmas. But the UK Government has not imposed the same for French drivers arriving here.

Mr Johnson said this was because, until recently, ‘things seemed more under control’ in France than the UK.

If testing for French hauliers is brought in, ministers are said to prefer them being administered on this side of the Channel around Dover in Kent.

In a separate glimmer of hope for holidaymakers, the Prime Minister told the committee that it was possible international travel will be allowed to some destinations from mid-May. Quizzed by Huw Merriman, Tory chairman of the transport committee, Mr Johnson predicted that the ‘natural wanderlust’ of Britons would lead to a ‘miraculous change’ in the desire to go abroad once it is safe to do so. 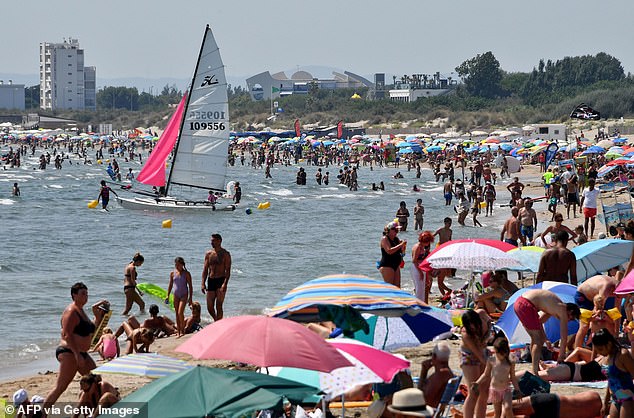 Pictured: People enjoy the beach in La Grande-Motte on August 1, 2018

‘The hope is we can get people moving again by May 17… in the way that I’ve set out in the roadmap,’ he said. ‘We’ll just have to see where we get to and where other countries get to.’

But Home Secretary Priti Patel has cast doubt over the prospect of foreign holidays, refusing to rule out restrictions lasting throughout the summer.

She told Times Radio: ‘We will put in any measures that we need to should new variants become a problem for our country. If we need to make changes we will.’