The crippling public transport strikes in France have now entered into their tenth consecutive day.

The nationwide protests are aimed at forcing government to scrap a pension revamp as fears grow that the travel mayhem will continue during Christmas.

Train traffic was severely disrupted with only one out four high speed long-distance trains and three out of ten regional trains running across the country. 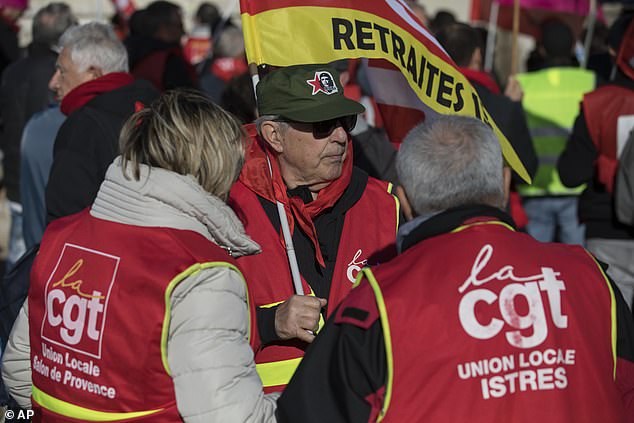 The crippling public transport strike in France has now entered into its tenth consecutive day as unions try to block government’s pension reforms. Pictured: Protestors from the hard-line CGT-Cheminots, which is the main national rail operator union

But Paris and its surrounding areas remain the worst hit.

Nine metro lines in the capital remained closed and there were skeletal transport services between the city and its suburbs.

And only 60 per cent of the city’s bus services were running.

Strikers have warned of similar disruptions on Sunday and Monday as well as announcing a massive protest for Tuesday when tens of thousands are expected to take to the streets again.

Rachel Picard, the managing director of the national rail operator SNCF, told Le Parisien earlier today that ‘half of the passengers’ would have trains to visit family for Christmas’ but did not elaborate.

In 1995, Unions forced a right-wing government to back down on pension reform after causing three weeks of metro and rail strikes just before Christmas – a success that they are hoping to replicate. 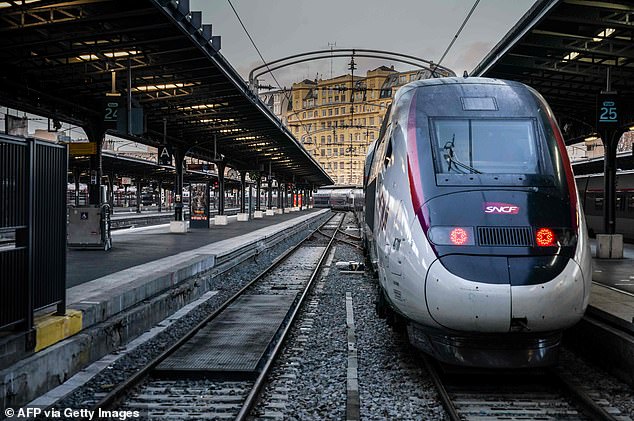 The prospect of a protracted standoff has left businesses fearing big losses during the crucial end-of-year festivities as well as travellers worrying that their holiday plans will fall through.

Prime Minister Edouard Philippe asked the chief of SNCF on Friday to draw up a list of exactly which trains would be running during the festive season.

But Laurent Blum, the general secretary of the hard-line CGT-Cheminots, which is the main SNCF union, said: ‘If the government wants the conflict to end before the holidays, they have all of next week to take the wise decision and scrap the point-based pension plan.’

The pension reform is set to scrap 42 separate regimes including those that offer early retirement as well as other benefits to public sector workers such as train drivers, dockers and even Paris Opera employees. 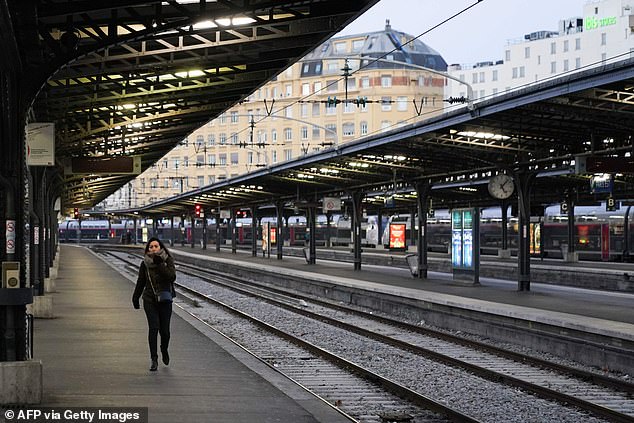 The prospect of a protracted standoff has left businesses fearing big losses during the crucial end-of-year festivities as well as travellers worrying that their holiday plans will fall through. Pictured: Gare de L’Est train station, Paris

Meanwhile teachers, who have been mobilised since the start of the protest, yesterday gained guarantees of salary reviews from government which would cost the state €10billion (£8.3billion).

But the full details have not been revealed.

Similarly, policemen ended their protest on Friday after getting assurances that their early retirement scheme would be maintained owing to the ‘dangerous’ nature of their job.

Both Paris operas, the Garnier and the Bastille, cancelled Friday performances as well as several more through the weekend.

President Emmanuel Macron’s government insists the changes will make for a fairer system and help erase pension system deficits that are forecast to reach as much as €17billion euros (£14.2billion) by 2025.

The average French person retires at just over 60 years old which is considerably earlier than most elsewhere in Europe.

Prime Minister Philippe has scheduled more negotiations over the coming week but has previously said that he ‘has absolutely no fear of implementing this reform’.

Macron, who has maintained a silence since the protests began, told reporters in Brussels on Friday that it was a ‘historic reform’ while also expressing solidarity with those affected by the fallout.

Seth Rogen Apologizes for Putting a Child Actor in Blackface: 'This Shouldn't Have Happened’

Jogger narrowly avoids being struck by a train while crossing tracks