Paris: The long-serving head of France's skating federation has resigned amid suspicions that he covered up for a coach accused of rape and sexual abuse by former figure skaters.

Didier Gailhaguet denies protecting the coach and says he's not at fault, and cast blame on the Sports Ministry when he announced his resignation following a special meeting at the federation on Saturday. He said no one at the federation was aware of alleged wrongdoing. 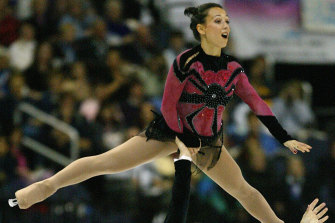 France’s Sarah Abitbol, pictured competing in 2003 in the pairs free skate event of the World Figure Skating Championships has made accusations she was raped by a coach. Credit:AP

Paris prosecutors opened a criminal investigation this week into accusations from 10-time French champion Sarah Abitbol that she was raped by coach Gilles Beyer from 1990-1992, when she was a teen.

Two other former skaters have also accused Beyer, and denounced a lack of support from the federation.

The accusations led to calls for Gailhaguet to resign, because Beyer was allowed to continue having roles at the French skating federation until 2018 despite having been let go by the French sports ministry in 2001 following a report highlighting repeated "serious acts" committed against young skaters.

"I have taken with dignity, and without any bitterness despite the injustice, the wise decision to resign," Gailhaguet told reporters after a board meeting. 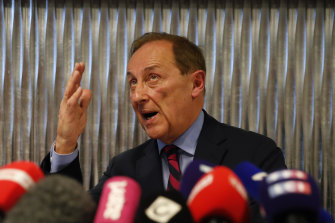 On Wednesday, Gailhaguet refused to step down, saying he had made "mistakes" but that he was never "at fault".

Beyer last week said that he had had "intimate" and "inappropriate" relations with Abibtol, who is now 44, in comments to Agence France Presse. His lawyers on Friday said in a statement he "reserved his comments for the prosecutors".

Gailhaguet had been president of the FFSG since 1998 with a gap between 2004-07 after he was suspended by the International Skating Union for his role in a judging scandal at the 2002 Olympics in Salt Lake City.

Beyer was the team manager of a French juniors team at the 2011 world championships despite a Sports ministry-led inquiry from 2000 showing that the former coach had inappropriate behaviour with an underage skater.

The inquiry showed that in 1999 Beyer went to an underage skater's bedroom during a training camp and 'put his hand behind the young girl's neck, pulled her toward him and asked, 'Do you want me to kiss you or do you want me to go'."

"He asked her how old she was, adding, after she had told him she was 17, '17 or 18, it doesn't change anything'," stated the report, which Reuters has seen.

"Everybody makes mistakes. I made mistakes but I was never at fault," Gailhaguet, who said he initiated the 2000 inquiry, told a news conference on Wednesday.

"Yes, the executive committee named him [Beyer] team manager of the juniors team in 2011. It's easy to judge now that we know the facts."

Abitbol accused Beyer in a book published last week and has also spoken about her personal experience on television.

Gailhaguet served a first term as FFSG president 1998-2004 and started his second stint in 2007. Four members of the FFSG's executive office, including a treasurer, resigned on Tuesday night.

My polygamist father married 27 times – and I have 150 siblings

'I'm a plus-size, woman of colour over 30, but I can still be a beauty queen'