First published in The Age on September 2, 1983

Washington, 1 September – The United States today accused the Soviet Union of shooting down a Korean Air Lines jumbo jet with 269 people on board. 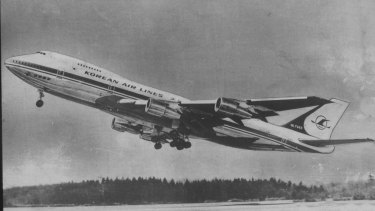 A South Korean Airlines Boeing 747 jumbo jet, similar to this one, was shot down killing all aboard.

The airliner apparently went down in the sea near a Soviet-held island north of Japan.

The US Secretary of State, Mr Shultz, said he had called in the Soviet charge d’affaires in Washington this morning to express “our grave concern over the shooting down of an unarmed civilian plane carrying passengers of a number of nationalities”.

“We also urgently demanded an explanation from the Soviet Union,” Mr Shultz said.

“The US reacts with revulsion to this attack. Loss of life appears to be heavy.

“We can see no excuse whatever for this appalling act.” 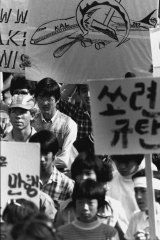 Protest March from Hyde park to Soviet Embassy in Woolahra to Protest the shooting down of the Korean plane.Credit:Gerrit Fokkema

Mr Shultz said the US Government had summoned the Soviet charge d’affaires as soon as US sources had confirmed the shooting of the airliner.

He said that the US had made the protests on behalf of itself and of the Republic of Korea.

In a statement, Mr Shultz said the Korean Air Lines plane had strayed into Soviet air space and the Soviets had tracked it for some two and a half hours.

A Soviet pilot had reported visual contact with the airliner at 6.12 pm (Washington time) on Wednesday.

Mr Shultz said the Soviet plane had been in constant contact with ground control and that at 6.21 pm the Korean aircraft was reported at 10,000 metres.

At 6.26 the Soviet pilot reported he had fired a missile and that the target was destroyed.

At 6.30 the Korean plane was reported by radar at 6000 metres. Eight minutes later it disappeared from the radar.

Two US aircraft were taking part in the search for the aircraft in international waters.

The airliner was flying from New York to Seoul via Anchorage, Alaska.

The Japanese Defence Agency monitored a message from the pilot of a Soviet MiG-23 which said he was going to fire on a Korean Air Lines jetliner just before a KAL aircraft disappeared early today, the Jiji News Agency reported.

The agency, quoting official sources, said that the pilot told his base on the Sakhalin Island: “I am going to fire a missile. The target is the KAL airliner.”

The sources said the message was intercepted a second before the unidentified plane, likely the Boeing 747 dropped off radar screens.

Mr Shultz, who spoke emotionally, said that at least eight Soviet jets had been involved in tracking the airliner.

A Pentagon source was quoted as saying that the Soviets permit their fighters to shoot at aircraft intruding into their territory. He said US planes did not operate under such rules and would not shoot under similar circumstances. “The shoot, we don’t,” said one Pentagon source.

The MiG-23 is one of the Soviet Union’s most advanced jet fighters. It is armed with air-to-air missiles codenamed by NATO as “Aphid” and “Apex”.

Earlier this week, Japan’s Defence Agency reported that the Soviet Union had stationed more than 10 MiG-23s on Etorofu Island, one of the four former Japanese Islands occupied by the Soviet Union at the end of World War II.

The island is about 240 kilometres east of the northernmost Japanese island of Hokkaido.

The Japanese Foreign Minister, Mr Abe, told reporters tonight: “Judging from various circumstances there is a strong possibility that at Soviet aircraft shot down the Korean airliner. If it is true it is an extremely deplorable incident.

Mr. Abe said that from available information it was believed the airliner crashed at 3.18 am Japan time (4.38 am AEST), nine minutes after an unidentified plane, believed to be the Jumbo, disappeared from Japanese radar at a point west of southern Sakhalin.

The Soviet Union told the Japanese Embassy in Moscow earlier today it knew nothing of the Jumbo jet’s fate.

In the Government’s first official announcement on the plane’s disappearance, Mr Lee said efforts to confirm the aircraft’s fate were continuing.

He said that if indications that the plan had been downed “proved a fact, it would constitute a grave violation of international law and an inhumanitarian act” which must be condemned by the international community.

Mr Lee did not name the third country in his brief announcement, but Korean Air Lines earlier had said the Boeing 747 had landed on Sakhalin.

The plane, on a flight from New York to Seoul, was reported missing after reports that it had been lost from contact while flying near Hokkaido, the northernmost Japanese island.

Korea Air Lines, the national flag carrier, later announced to waiting relatives and friends in Seoul that the plane had landed safely on Sakhalin.

Japanese air force officials said the Korean airliner may have been crippled by a mid-air explosion.

One air force official, who noted the jumbo vanished from radar screens while flying at more than 10,000 metres, said “A mid-air explosion or a sudden dive could be conceivable among other explanations.”

Officials of Korean Air Lines said the pilot, Captain Chun, had more than 10,000 hours of flying time and described him as “a very experienced pilot and not the sort of person who would disappear just like that. “

There were no immediate official explanation for the KAL announcement made earlier in the day that the plane was on Sakhalin, but sources said it was based on premature reports that later proved to be false.

The airline said the plan carried 240 passengers and crew of 29. Among the passengers, it said were 81 South Koreans, many of whom lived in the United States. If said there also were 34 residents of Taiwan aboard, 22 Japanese and 103 people of other nationalities.

There was no immediate breakdown available of the other nationalities, but one of those listed on the passenger manifest was an American Congressman, Mr Larry McDonald. Mr McDonald, a 48-year-old Democrat from Georgia, is chairman of the John Birch Society and a member of the House Armed Services Committee.

His staff said he was going to South Korea to attend a security seminar marking the 30th anniversary of the US-South Korea defence pact.

The last radio contact was at 3.23 am (4.23 am AEST), when the pilot reported his position as 181 kilometres south of Hokkaido, a KAL spokesman said. He said the pilot gave no indication of any trouble and that the weather was reported good in the area.

However, Japan’s defence agency said its radar showed no plane south of Hokkaido at the time, but did show what might have been the Jumbo jet about 181 kilometres north of Hokkaido near Sakhalin’s coast.

Earlier the South Korean Foreign Ministry said it received word from US authorities that the plane was forced to land on Sakhalin, where the Soviet Union has large military bases.

But a Soviet Foreign Ministry official in Moscow said that jest was not on the island and Soviet authorities had no other information on the plane, a Japanese Embassy spokesman said.

South Korea and the Soviet Union have no diplomatic relations and communications concerning the plane were said to have been channeled through Japan and other countries.

During an afternoon of increasingly confusing reports, there was speculation that if the plane had been forced to land at Sakhalin or gone down near the Soviet island, the Soviets might claim a violation of their airspace.

An airline spokesman said Mr Grenfell was a native of Australia and his family had been visiting Mrs Grenfell’s family in Rochester, New York.

Sex on Mars could create a new human subspecies

Headache and feeling dizzy may be signs of coronavirus, new study finds – The Sun