Home » World News » From the Archives, 1991: Keating defeats Hawke in a leadership spill

Labor's gamble makes it a race

LABOR'S centenary of 1991 was the sort of birthday no political party would want to have. The ALP celebrated its hundred years in bleak despair and with black humour. The Federal Government presided over a deep recession and the highest unemployment since the 1930s depression. 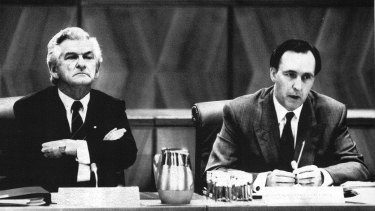 Bob Hawke and Paul Keating during the Premiers conference, May 1991.Credit:Peter Morris

Labor fell to a political nadir. Increasingly desperate, the party made history by, for the first time, unceremoniously dumping a federal leader in office – the man who had set a record as the longest-serving Labor PM.

In 1991 Labor showed once again its modern trait: a tough-minded willingness to break with the past and set off on a new course. In the past decade, changes of federal and state leaders and new directions in policy have been Labor's hallmark – the old sentimentalities of earlier times left well behind. The switch from Bob Hawke to Paul Keating was a daring and radical decision. The early months of 1992 will show how substantial a shift of policy will follow; it will not be until 1993, however, that the success of the changes will be tested.

What had been a very successful Hawke Government lost its way both economically and politically in 1991. The battle over leadership ensured a Government at civil war. Policy became victim of the struggle. The March industry statement was an obvious example. Hawke seized control of the statement to try to bolster his position; Paul Keating and John Button sulked; the statement flopped, displeasing business and drawing trenchant private criticism from ACTU secretary Bill Kelty. 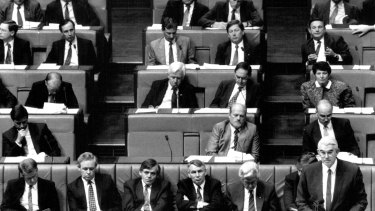 Paul Keating sits on the back bench after the first, failed leadership ballot, August 1991.Credit:Peter Morris

By the time Keating pulled on his May-June challenge, it was clear the party had for all intents and purposes destroyed Hawke. He could never recover in electoral terms. But caucus was not willing then to recognise that harsh reality and make the change. By voting Hawke back 66-44 it gave him a superficially respectable margin but one which, in the nature of leadership fights, was not decisive.

For the next few months, the leadership contest see-sawed. At times Keating went into the doldrums, looking beaten. Hawke eventually lost his job primarily through his own mistakes, some "forced" in the tense atmosphere created by Keating's guerilla campaign. Hawke was brought to his knees by his own inadequacies – in the final instance, his failure to mastermind an effective way of responding to the Opposition's GST package – and by failures of his lieutenants, especially his Treasurer, John Kerin, who misread the economy, stumbled repeatedly and failed to grab any economic or political opportunities. 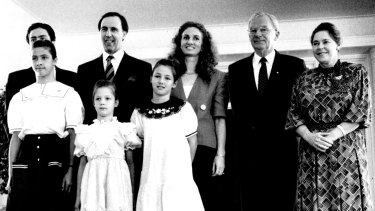 While Kerin and the Deputy PM, Brian Howe, each had a bad year, Bob Hawke was the tragic figure of 1991. The old actor insisted on playing too many encores. He was convinced he had the best chance of leading Labor to another victory. (If Keating loses in 1993, no one can prove otherwise.) Hawke would have done better to have quit graciously, than endure the humiliations of the past 12 months. He spurned sound advice early this year to look for an overseas job. Partly, he resisted the tide because he miscalculated how his party felt about him, but also because the prime ministership had become his only life.

In 1991, John Hewson has emerged from the political cocoon. He has matured as a leader. Under him the Opposition is now a united team, the '80s squabbling just a bad memory. The scope and presentation of Hewson's GST package was not only impressive – it also scored an immediate political hit. It was a decisive factor in Hawke's fall.

Hawke's demise and Keating's accession have dramatically changed the political landscape for the rest of this parliamentary term. Exactly how, is history still to be written.

A year ago an aged, weakened PM faced a newcomer who was being welcomed by the electorate as a fresh (if little-known) face. Now the contest is between young, aggressive rivals who have more in common than they like to admit.

For the Opposition, the arrival of PM Keating has minuses and pluses.

The Liberals would have been most advantaged by the Labor leadership continuing unresolved as long as possible, with Hawke ultimately remaining. He would have gone into the election a lame duck.

Keating brings new zeal and determination. Ironically, although he has been in Parliament more than two decades and Hewson less than five years, Keating is now the leader with novelty value. For Labor in the short term, he is a circuit-breaker. Always at home in the House, Keating will change the dynamics in Parliament and make that forum, not naturally Hewson's, much harder for the Opposition Leader.

If he is to have any chance at the election, Keating has to be a crash-through PM. He knows he can only win from going on the offensive.

Significantly, when he became Leader, the Government stopped being preoccupied with replying to the GST and started preparing its alternative economic program. The big message from the good public reception to the coalition's "Fightback" program is that the electorate is looking for "packages" – for grand, sweeping answers to the country's problems.

If the PM's verve will make 1992-93 trickier for Hewson, Keating's record – the Treasurer who engineered the recession – will handicap the new PM. At least it will if Keating cannot convince the community very quickly that the man who brought the recession also has a convincing plan for recovery.

That is why the economic statement early next year is so crucial to the rest of 1992. If it fails, Keating could have lost the game for good.

The statement is expected to be pitched at lifting business confidence; the budget would then concentrate on "the punters" – the middle-income families whose votes Labor needs.

The statement has to succeed on two levels. It must change the recession psychology. And its measures must be cast to give the economy a lift without creating new problems. Success in the first goal would, of course, contribute to success in the second.

The big question Keating and his Cabinet face in the first few weeks of '92 is how substantial to make the policy shift embodied in the statement. By choosing John Dawkins as Treasurer, Keating has suggested a bigger change than might have been expected. The ACTU will be pushing him to act boldly, warning that this statement is, indeed, a case of the "one shot in the locker". By the time the budget comes, it will be too late. The Treasury is likely to be urging caution. Striking the right balance could be hardest economic decision of Keating's career.

TO have the slightest chance at the election Keating needs, by the end of 1992 or early 1993, to be able to point to continued low inflation, reasonable job growth, a respectable balance of payments, improved business confidence and performance, continued restructuring of the economy and, most important, the start of a fall in unemployment.

Without economic recovery, the Keating Government cannot look the electorate in the eye. Keating has to "set the sails for growth", to use his old phrase, but avoid the rocks that surround the passage.

Beyond that, the new Prime Minister has to fight that most insidious of political opponents – the "time for a change" syndrome. Labor has turned to him because it thinks he can do that better than Hawke could.

Keating faces a twofold risk, even if he gets the recovery going. First, it will take a long time for people to forgive, let alone forget, the recession. Second, the public may feel it has had enough of Labor, never mind who is the leader. The challenge for Keating is to strike the right policy mix for economic recovery, and the right style for that "touch of excitement" he promised when he was making his June leadership bid. 1992 promises to be the year when Labor runs very hard, and very much against the odds.

The top 12 pizza restaurants in Britain revealed – is your favourite among them?