Double-vaxxed traveller catches Omicron Covid inside a Hong Kong quarantine hotel from a guest staying across the hallway, despite both never leaving their rooms – raising new fears over how infectious the strain is

A person has caught Omicron Covid inside a quarantine hotel in Hong Kong from a guest across the hall despite both never leaving their rooms, it has been revealed.

Both patients were double-vaccinated and both had tested negative on a PCR before arriving in Hong Kong last month, with one flying in from Canada and the second flying in from South Africa.

The findings raise further fears about just how infectious the Omicron strain of Covid is, and how fast it could spread if even some of the strictest border restrictions on the planet failed to contain it. 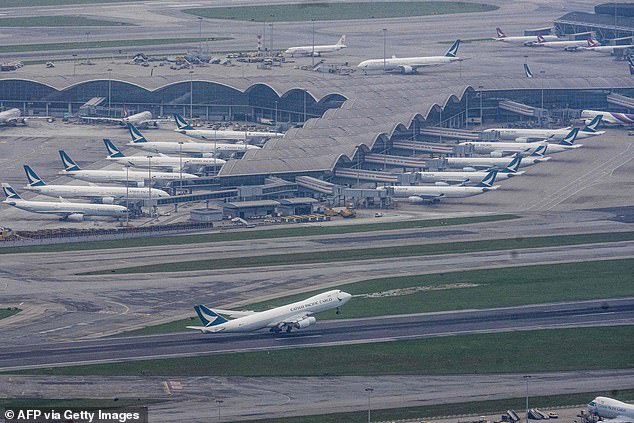 A traveller to Hong Kong (airport, pictured) was infected with Omicron Covid inside a quarantine hotel despite being double vaccinated and never leaving their room

Researchers from the University of Hong Kong revealed the infection on Friday, in a research paper that was published online.

In it, they write that one traveller – Patient A – had arrived from South Africa on November 10 having tested negative for Covid on a PCR 72 hours beforehand.

Patient A had been double-vaccinated with Pfizer on June 4, and was placed in a quarantine hotel in line with Hong Kong’s strict border laws which mean most air arrivals from outside China have to quarantine for at least 14 days.

Patient B had arrived from Canada the previous day, November 10, having also tested negative on a PCR in the 72 hours beforehand.

They were also double vaccianted with Pfizer, and got their second dose on May 25 – around six months before they arrived in Hong Kong.

Patient B was taken to the same quarantine hotel as Patient A, and confined to a room directly across the corridor.

Patient A then tested positive for Covid without displaying any symptoms on November 13. He was taken to an isolation unit in hospital the following day.

Four days later, on November 17, Patient B developed mild Covid symptoms and tested positive on a PCR on November 18. He was also taken to hospital and isolated.

Genetic sequencing subsequently confirmed that the two travellers were carrying viruses that were almost genetically identical.

More sequencing then confirmed that the virus being carried by Patient A was Omicron, and very closely matched early cases identified in South Africa.

Researchers therefore assume that Patient A caught the virus in South Africa, brought it to Hong Kong, and then passed it to Patient B.

Scientists who reviewed CCTV footage and other evidence collected from the hotel said neither patient left their rooms during their stay, and no items were passed between the rooms.

The only times the door of either room was opened was to collect food, which was delivered around the same time each day.

‘Airborne transmission across the corridor is the most probable mode of transmission,’ the report concludes.

While the travellers did also open their doors to get Covid tests, scientists believe these were given on alternating days because the pair arrived one day apart.

They believe it is therefore unlikely the pair were infected while getting tested.

The paper concludes: ‘The detection of Omicron variant transmission between 2 fully vaccinated persons across the corridor of a quarantine hotel has highlighted concerns’ that Omicron is more transmissible, even among the vaccinated.

‘Further… investigations of this newly found [variant[ are urgently needed. Increased precautions or additional measures might be warranted while awaiting more data.’

Omicron was first reported to the world in late November, after scientists in South Africa identified the variant from a sample collected in Botswana on November 9. 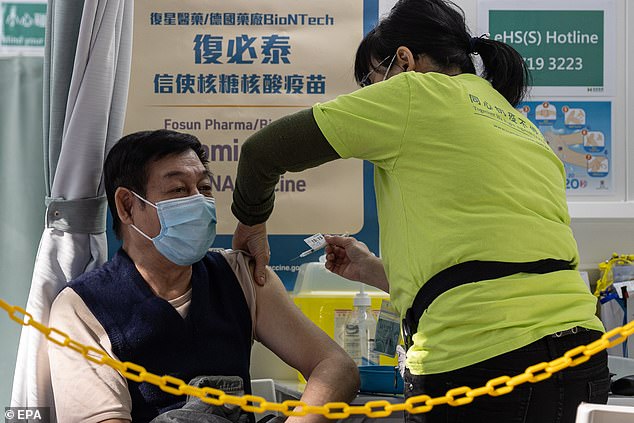 It is the most-mutated version of Covid yet uncovered, with several of its mutations known to make the virus more infectious even among the vaccinated.

Evidence gathered since then seems to reinforce that suspicion, with cases in South Africa soaring by more than 400 per cent in the week since it was uncovered.

However, much is still unknown about the new variant – including the severity of illness it causes.

So far, data has suggested that most infections are mild with no deaths yet registered – though health experts have cautioned that it may take weeks before the full impact of the variant on hospitalisations and deaths becomes clear.

The WHO has urged countries to prioritise vaccinated their unprotected citizens as their top priority, and has renewed calls for more jabs to be sent to poorer countries to stop variants from emerging.

Scientists from the European Centre for Disease Control have cautioned that travel restrictions may help slow the initial spread of Omicron, but are unlikely to stop it and will likely become redundant within a couple of weeks.

Instead, they urge wider vaccination coverage along with measures used to fight Delta, such as hand washing, social distancing and mask wearing.

When sneezing could be a sign of deadly disease… clue, it smells funny – The Sun