‘Why are woke vegans dictating what can be eaten in schools?’: Fury as ‘right on’ headteacher’s campaign to force feed pupils a meat-free diet hits GMB amid plans to ban ‘left-wing brainwashing’ in classrooms

A primary school headteacher has been hit with a backlash over a campaign to force feed pupils a meat-free diet amid plans to ban ‘left-wing brainwashing’ in classrooms.

Rachel Tomlinson, the headteacher of Barrowford Primary School in Lancashire, has received widespread criticism over her ‘ludicrous’ decision to ban meat from its canteen and children’s lunchboxes in order to help ‘stop climate change’.

She previously forbade teachers at the school from raising their voice and holds a belief that there is no such thing as a ‘naughty’ child.

But the controversial headteacher’s meat-free rule today received the backing of vegan comedian Jake Yapp on ITV’s Good Morning Britain, who said meat should be banned from schools to help raise children ‘to become good custodians of the planet’.

He added: ‘It [veganism] makes life easier for everybody. My son is vegan and he can never have school dinners because there is never a vegan option. To me it makes sense to make it accessible for everybody.

‘It makes sense for everybody because we all know by now that the CO2 emissions from meat are at least ten times worse than a vegetarian or vegan option.

‘If we want to raise the next generation to become good custodians of the planet it is definitely worth us leading by example in schools.’

However, primary school headteacher Bryony Baynes said the meat ban would have ‘all sorts of implications’.

She added: ‘I can imagine I would probably face something of a backlash from parents [if she was to impose a meat ban].

‘I do agree that we want to raise children to be informed consumers and teach them to make decisions that will impact positively on the environment but we don’t do that by banning things. 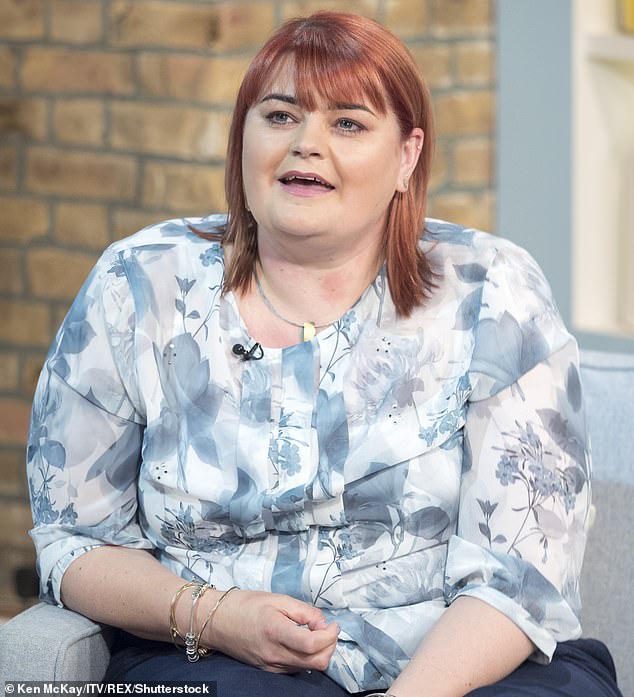 Rachel Tomlinson, the headteacher of Barrowford Primary School in Lancashire, has banned meat from the school’s canteen and from children’s lunchboxes 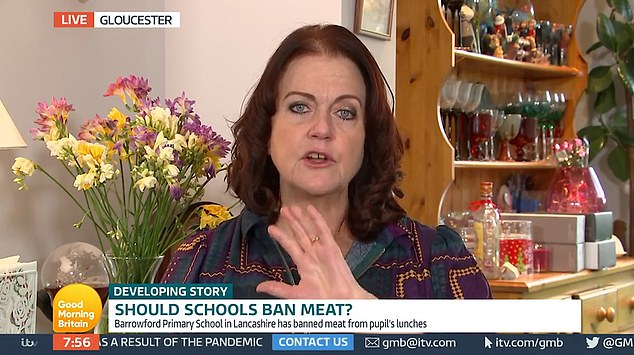 ‘That is taking the element of choice away from children and that is saying this is not good for you. I think there is all sorts of implications to labelling some food as bad and other food as good in terms of future body impact, eating choices etc.’

And viewers reacted with anger on social media over the rise of ‘militant veganists’.

Leo Sim said: ‘Yes, be vegan, all you like in fact! But don’t restrict other peoples choices.

‘Freedom of choice is essential to how we live as human beings. Otherwise people will just live in despair and misery like these other vegans.’

Robin Bennett added: ‘We have been eating meat for a couple million years and the planet is still here. Why are we letting the woke vegan dictate what can be eaten in schools?’

A third person said: ‘Why are people not given the option to CHOOSE what they want to eat rather than being forced what to eat because of some militant vegan?’ 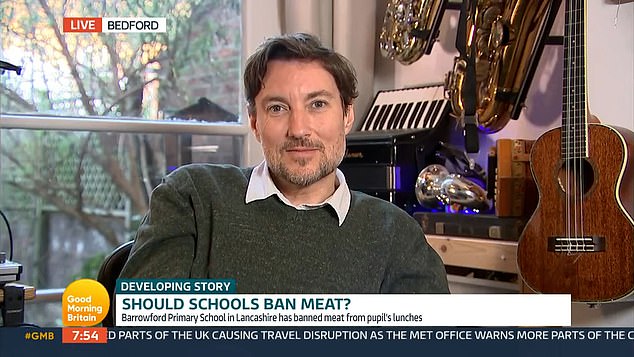 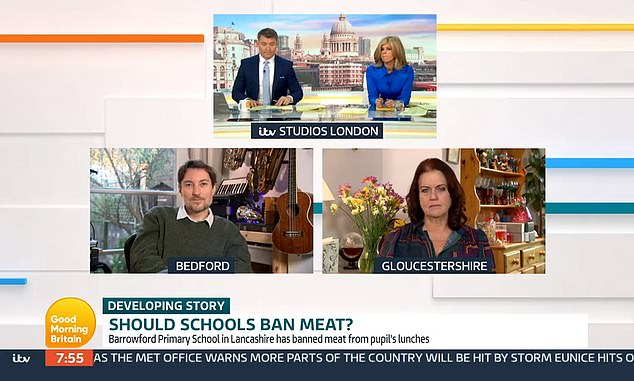 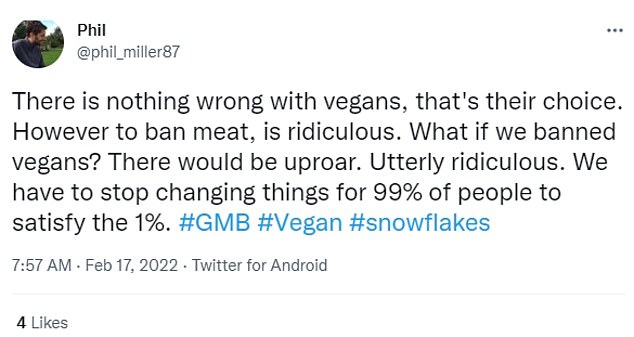 Good Morning Britain viewers have reacted with fury after Jake Yapp backed the meat-free rule at the school, slamming the rise of ‘militant veganists’

There has been a steady stream of examples of political bias in schools.

Only this week, for example, it emerged that teachers were told in a lecture organised by the National Education Union to drop terms such as ‘Sir’ and ‘Miss’ to encourage gender neutral classrooms.

And last week a row erupted after Welbeck Primary School in Nottingham encouraged ten and 11-year-olds to write letters to their local MP criticising Boris Johnson as a ‘hypocrite’ over Partygate.

Ms Tomlinson previously caused a stir among parents at Barrowford over a belief that children should not be punished, with misbehaviour being treated as ‘a learning moment’.

Instead of becoming angry at pupils, teachers are also encouraged to say a child has ’emptied my resilience bucket’, before sending them to the ‘nurture room’ if their behaviour gets out of control.

The school’s relationship management policy also currently says that staff are to ‘use anger onions to support in the regulation of behaviours’ – an exercise coined by family therapist and author Judy Bartkowiak.

It comes as teachers will be banned from indoctrinating pupils on politically-charged topics such as Black Lives Matter, the British Empire and the Israel-Palestine conflict under new guidance out today.

They will be told not to give one-sided accounts of national heroes such as Winston Churchill, branded ‘racist’ by activists in recent years.

And after cases of teachers encouraging children to criticise the Tories, they will be warned to keep their party-political views to themselves.

Schools are already legally obliged to be politically impartial but, for the first time, the new guidance suggests how this applies.

The new guidance issued by Mr Zahawi states that ‘contentious and disputed’ issues around the British Empire should be ‘taught in a balanced manner’.

This is likely to be in response to the large number of schools teaching the topic as part of a ‘decolonised curriculum’ after pressure from campaigners.

The guidance also states that while schools should teach that racism is wrong, they should not advocate support for political groups such as Black Lives Matter.

It notes the movement has called for extreme measures including ‘withdrawing funding from the police’. 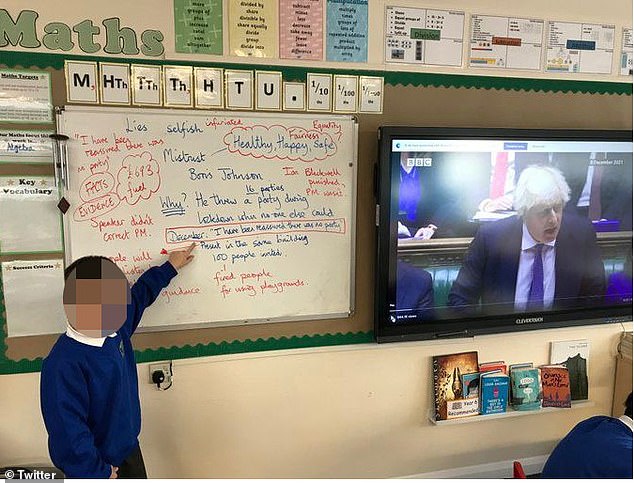 After cases of teachers encouraging children to criticise the Tories (pictured), teachers will be warned to keep their party-political views to themselves under new guidelines 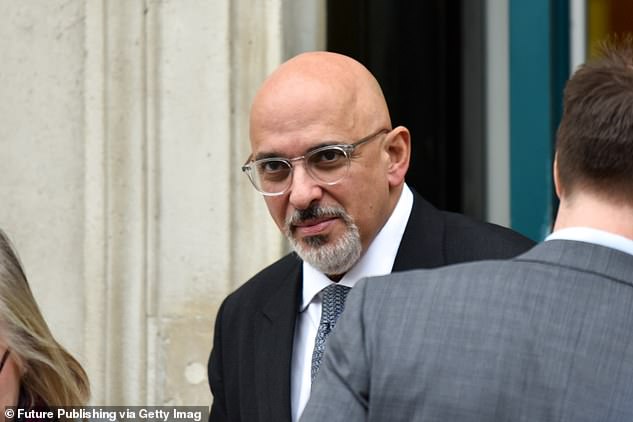 ‘Partisan political views must not be promoted to pupils,’ the document says.

Regarding historical figures ‘with contested legacies’, the instruction is to focus on what they are ‘most renowned for’ and provide ‘factual information’ if children are too young to understand the complexities of the issue.

For older pupils, both sides of an argument are to be presented, the guidance adds.

When discussing elections, teachers can consider issues but must not lead pupils to a particular ‘conclusion’.

‘As a general principle, they should avoid expressing their own political views to pupils unless they are confident this will not amount to promoting that view,’ the guidance says.

‘Where staff do share their personal political views, they should ensure this is not presented as fact and note there are opposing views.’

Mr Zahawi said: ‘I am reinforcing that no subject is off limits in the classroom, as long as it is treated in an age-appropriate way, with sensitivity and respect, and without promoting contested theories as fact.’

The guidance applies to all schools, including academies and independent schools, but not early years settings, 16-19 academies, further education colleges or universities.

Dr Mary Bousted, of the National Education Union, criticised the move, saying: ‘Very good guidance already exists and this is followed up and down the country.

‘Educators take their responsibilities for teaching in these areas seriously and carry it out with considerable thought.’

This Is Us: Chrissy Metz & Hannah Zeile Discuss Kate's Abortion — Plus What to Expect in Season 5

Delighted women share before and after snaps of their hair