A barrister representing a man acquitted of raping a teenage girl suggested the jury should consider the type of underwear she was wearing, sparking fury among campaigners.

Elizabeth O’Connell, was representing a 27-year-old man accused of raping a 17-year-old teenager in Cork, Ireland, suggested to jurors they should consider the lace thong she was wearing in her closing remarks.

According to the Irish Examiner, she said: ‘Does the evidence out-rule the possibility that she was attracted to the defendant and was open to meeting someone and being with someone?

‘You have to look at the way she was dressed. She was wearing a thong with a lace front.’

A barrister representing a man acquitted of raping a teenage girl suggested the jury should consider the type of underwear she was wearing, sparking fury among campaigners

The man wept as he was found not guilty of raping the woman in Cork, by a jury of eight men and four women, who deliberated for one and a half hours, at Central Criminal Court.

Noeline Blackwell, the head of Dublin Rape Crisis Centre, told The Independent, she was not surprised by counsel focusing on the girl’s underwear.

She said:  ‘The reference to the girl’s underwear and the assumption and inference that the jury was being invited to draw – that because she was dressed like that she was asking for sex – does not surprise us,” she said.

‘We accompany people to court and the whole time we see rape stereotypes used to discredit complainants and to enforce elements of the defendant’s case.’ 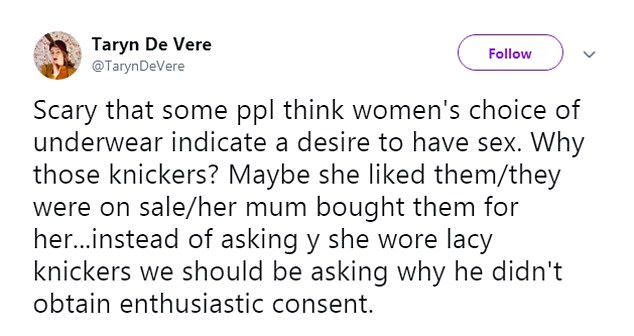 The decision also sparked fury online with one user on social media saying: ‘Scary that ppl think women’s choice of underwear indicate a desire to have sex.

‘Why those knickers? Maybe she liked them/they were on sale/her mum bough them for her…instead of asking y she wore lacy knicker we should be asking why he didn’t obstain enthusiastic consent.’

The Sexual Violence Centre Cork, responded to the post saying ‘rape underwear’ is now a ‘thing in our criminal justice system.’

Another social media user said: ‘Another shameful and disgusting example of the ideology of victim blaming in a rape trial in Cork.’

The case was dominated by the issue of consent, in the immediate aftermath of the disputed incident the complainant said: ‘You just raped me’ and the defendant said: ‘No, we just had sex.’

The Best TV Shows & Movies Coming to Netflix in October 2018