German environmentalists and political leaders are at loggerheads over a proposed Tesla electric car factory in woodland outside Berlin, with the government warning over the future of a project seen as key for its support of green technologies and regeneration in the east of the country.

The economy minister, Peter Altmaier, warned this week that delays could threaten the go-ahead of the so-called Gigafactory, which is expected to create 50,000 electric cars a year and employ up to 12,000 workers, after a court orderforced an immediate halt to the operation to clear 92 hectares of pine trees at the site in Grünheide, 24 miles (38 km) east of Berlin.

The environmentalist group Grüne Liga Brandenburg (Green League Brandenburg) said the US company was being given “preferential treatment” and should not be allowed to start felling trees until it had been granted full building permission.

“To fell half of the forest, when many aspects of this process are yet to be clarified seems fairly problematic, which is why we have asked the court to deal with it,” said Heinz-Herwig Mascher of Grüne Liga. “It is not that we have something as such against Tesla as a company or its objectives. But we are concerned the preferential treatment they’re being given could set a precedence.” 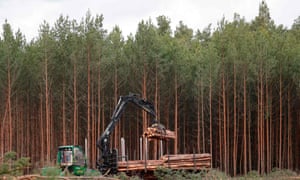 The project’s future is far from certain. It was hailed as an economic breakthrough for the underdeveloped region when it was announced by Tesla’s chief executive, Elon Musk, in November. It was promoted as having the potential to lure other investors interested in tapping into the country’s automobile and IT know-how, which has been slow to embrace potential solutions to the climate emergency.

“This electric car factory is of huge significance, and not just for ensuring more climate protection,” he told journalists from the Funke media group. “It’s also one of the most important industrial developments in eastern Germany to have happened in a long time.”

He has warned that if the project fails to go ahead it could have a considerable impact on the German economy, in particular its reputation for supporting green technology. Tesla is due to build its Model 3 and Y cars at the site from July 2021.

Grünheide residents are divided over the issue. The town, home in the 20s to a bakelite plastics factory, has repeatedly missed out on any big economic success in the decades since reunification.

At pro-Tesla demonstration locals said they were proud an industry promoting a low-carbon future wanted to make its home in Grünheide.

“We’ll be on the map for something positive and we might even get to test drive the cars,” said Elke, a gardener. “I also hope the factory’s presence will improve the local bus service”.

Steffen Schorcht, the founder of a citizens’ initiative against it, however said people felt “bulldozed” into accepting the project before some of the most basic questions had been clarified.

“Of course you always have to weigh up the economic interests with those of environmental protection,” he told Die Zeit. “It’s important to involve the locals in the discussion from an early stage, and that simply did not happen here. The people are supposed to feel blessed by the fact that Tesla is coming and bringing many jobs with it.” 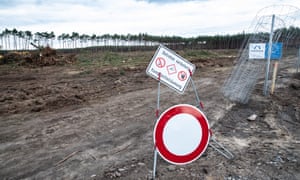 His campaign raises concerns about chemical pollution and water use in a region that has suffered for decades from low rainfall.

Tesla has said water consumption could be up to 372 cubic metres per hour, which some fear could drain the local lakes. “The politicians know how explosive this water topic is, and have tried to play it down, both to Tesla and the inhabitants,” Schorcht said.

The local wing of the anti-immigrant AfD party suggests the project will be of little benefit to Germans and that Tesla will seek to bus in lower-paid workers from nearby Poland.

Among environmentalist concerns are bat colonies, ant hills and unexploded ordnance. Bombs and other munition weighing a total of 85kg from the second world war have been found at the site and detonated.

Musk has addressed the concerns, stating that Tesla’s water usage would be much lower on a daily basis than the “rare peak usage” quoted to German authorities. For every tree the company fells, it has promised to plant three more. “Sounds like we need to clear up a few things!” he said in one of many tweets about the plant. 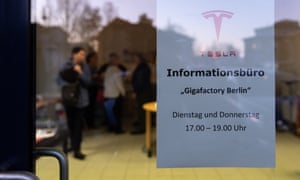 The company has set up a information office in Grünheide for residents to express their concerns and where they can address letters to “Dear Elon”. Visitors are also encouraged to inquire about employment opportunities.

Jörg Steinbach, the economics minister for Brandenburg, the state around Berlin in which Grünheide lies, said the future of the project was unclear

“As much as I was happy about the decision of Tesla to come here, I will only really be happy when the first worker contracted by Tesla puts his spade into the ground,” he said in an interview.

The next few weeks will be tense, he says, as Tesla seeks to hammer out the specifics of its deal with German authorities, including securing an estimated €100m (£83m) in government grants, and opponents submit their appeals within this time.

50+ Valentine's Day Gifts So Sweet, We Kind of Want Them For Ourselves

Family of boy, 11, who died in Texas files $100M suit against power companies