If you spy disused commercial premises undergoing transformation – or a vacant lot being built on – the chances are there is one purpose: new homes.

This is now something that’s happening on brownfield sites all across the country.

But there is a good reason for ‘new homes’ being the only response to the question ‘What’s being built here then?’ Because, despite successive governments saying they need to build more homes, there is still deemed to be a major shortage.

The current target is one million more homes over the next five years, many of them in London and the South East, and to help achieve this, the Government is heavily incentivising buying new-build properties.

For instance, in England you can buy a new-build with a deposit of just five per cent using the Help To Buy equity loan scheme.

This is not available for other types of properties, and there are various other measures that give new-builds advantages over older homes, allowing many buyers to get on the housing ladder who previously might not have been able to. 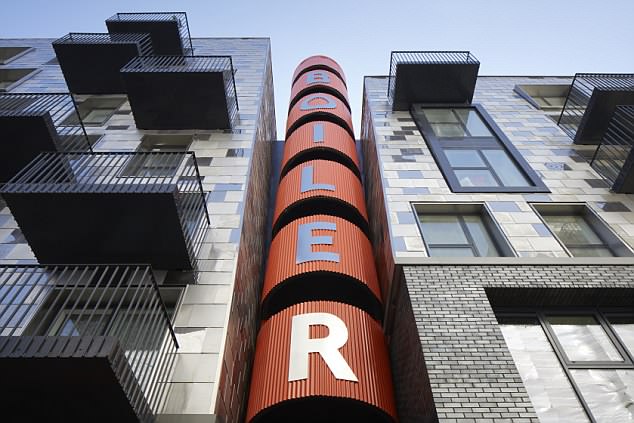 Then there’s the fact that new homes are built to the latest specifications, so major repairs should be unnecessary for the first few years. They tend to be more energy-efficient, too, so you could benefit from lower utility bills.

If you buy off-plan, you might be able to choose your fixtures and finishes, and of course there’s no upward chain to contend with when you buy a new-build.

About 145,000 new homes have been bought so far using the Government’s Help To Buy equity loan and London Help To Buy schemes.

But new-builds can also appeal to existing homeowners. Some house-builders, such as Bellway, run part-exchange schemes, which allow people to buy a new-build and use their current home as part payment. Bellway also offer Help To Buy, plus an ‘express mover scheme’ in which they work with a local agent to market your property. While you agree the selling price on your existing home, Bellway chase the agent to encourage them to find a buyer as quickly as possible and also pay the estate agents’ fee.

At The Boiler House, which was completed this month and is part of the huge Old Vinyl Factory conversion in Hayes, West London, the developer, HUB, is offering to pay the stamp duty on the new-build homes for sale. 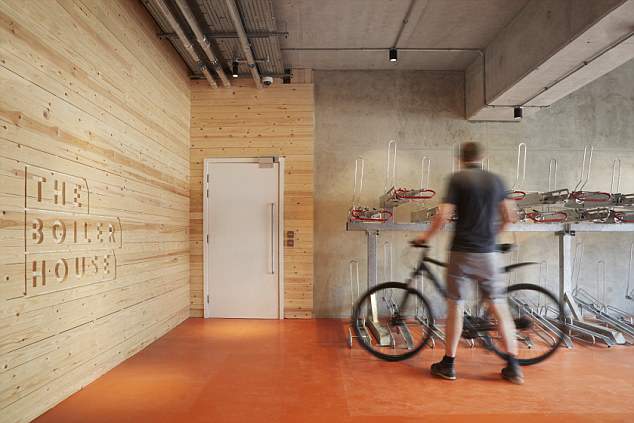 The Boiler House consists of 54 studio, one- and two-bedroom homes and has rooftop allotments for residents to grow their own vegetables and plants. The £250 million Old Vinyl Factory development is regenerating a 17-acre former EMI site that produced records until the late 1970s.

Other kinds of new-builds gaining popularity include homes in garden villages, where sustainability is key and green spaces are a priority.

Public space is a large feature of garden villages and homeowners pay an annual service charge to fund its maintenance.

Chris Tanner moved to Tadpole Garden Village in June 2016. ‘The fact that community engagement has been made a priority is the icing on the cake,’ he says. ‘We get to guide and shape our own community.’ Today, Chris helps organise community events at the garden village, from wildlife walks and meet-your-neighbour get-togethers to Christmas carols and Easter egg hunts. ‘The events are really important in helping us feel a strong sense of community,’ he says. ‘They offer a chance to get to know each other and what’s planned for the development. Everyone feels a part of it and in turn we’re proud of where we live.’

In with the new… and the old

As the Old Vinyl Factory development at Hayes in West London shows, new-builds don’t have to be devoid of history. Pristine new flats can be on the site of – or even housed in – buildings of historic significance.

First-time buyer Wahab Ahmed, 28, an analyst in the City, feels he has the best of both worlds: a new flat he bought off-plan but within the Royal Arsenal Riverside development in Woolwich, South-East London, which has 20 converted listed buildings, some dating from the 17th Century.

The Royal Arsenal was a huge area used for weapons manufacturing that grew on the south bank of the Thames over centuries. ‘It’s steeped in history and the mix of old and new really makes it stand out,’ says Wahab. He had been renting in Hoxton and Shoreditch in East London before buying his first property in Royal Arsenal Riverside’s Cannon Square, above the new Crossrail station.

He says: ‘Each time I thought I’d found somewhere, something would make me doubt I was making the right decision.

‘As soon as I stepped foot on the Royal Arsenal Riverside development, I knew this was the right place for me.

‘One of the main reasons I bought my home was to be close to the River Thames – for me it’s the heartbeat of London.

‘Waking up each day to see the sun rise over the Thames, and to see it set at night, really is something special.’

Wahab’s two-bedroom property is on the second floor of the Naval House building. He has a spare room for his brother and the property has a terrace that stretches the length of the flat. 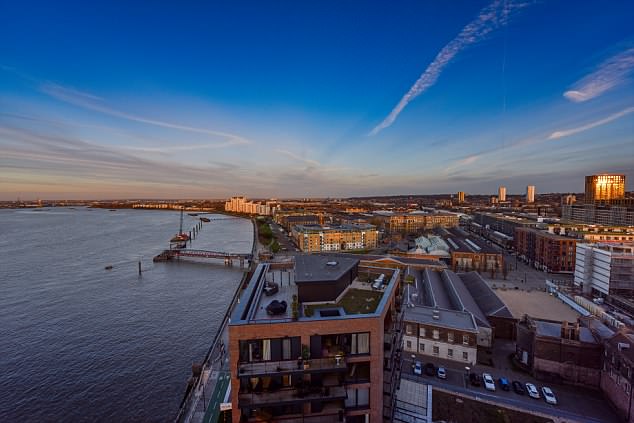 Royal Arsenal Riverside will be home to one of only two Crossrail stations south of the river once the line opens. Wahab believes Crossrail will have major economic benefits for everyone in the area.

‘The development is already really well connected, but I think Crossrail will bring even more businesses, shops and bars to Woolwich. It feels the perfect time to move here as I get to see the area change and grow.’

Alongside existing rail links and the DLR, the Thames Clipper provides another way to travel through London, with the O2 arena only an eight-minute boat ride away. City Airport is just two stops on the DLR.

Wahab adds: ‘Unlike my previous rented properties, this home is more sustainable and my bills are considerably lower. It’s also very low-maintenance, which is what I was looking for from the start.’ 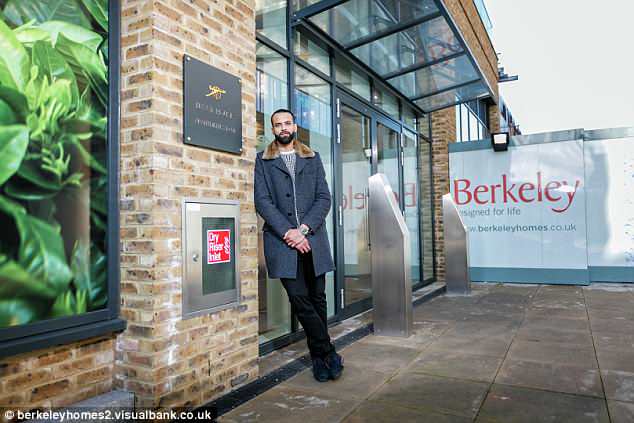 ‘I wish I’d been taught that in school’ is a refrain many of us repeat time and again over the course of our lives.

Since 86 per cent of us want to buy a home – and for everyone who does, there has to be a first time – purchasing a property is likely to be high on the list of topics that many wish had been on the curriculum when we were younger.

Well, for everyone daunted by expressions such as ‘completion date’ and ‘exchanging contracts’ – and which order they come in – estate agent Yopa has produced an advice guide to talk property virgins through those tricky first stages, where everything seems like a step into the unknown.

1 GET YOUR MONEY IN ORDER

It is likely you will need both a deposit and a mortgage, so try to build up as much as you can for your deposit, maybe asking your family for help. The mortgage you can get will depend on how much you earn, so have your bank statements – and details of other financial affairs – to hand.

When you know how much a mortgage lender will give you and what you can afford to pay, settle on a property and view it more than once – during rush hour, during the evening, and during the school run. Get a surveyor’s report done if you’re unsure about anything.

Make an offer – and offer what you think it’s worth, not what the owner believes it’s worth. Check similar properties in the area to make sure that you’re in the right ball park.

Tell the agent your offer, but don’t worry too much – it can be altered later. It’s not set in stone until you pay your initial deposit and exchange contracts.

5 SIT BACK AND WAIT

Vendors can take a long time to respond to your offer, but should normally come back within two working days.

6 GET A SURVEYOR AND A LAWYER

If your offer is accepted, find a surveyor as soon as possible. If the surveyor’s report is acceptable, move on to what’s called conveyancing – the legal transfer of the property from one owner to another.

Deal with the contracts for the purchase, and the disbursements (such as the cost to register your name against the title). Or rather, let your legal representative do it for you.

Paying the initial deposit and exchanging contracts commits you to moving into the property. There’s no going back now.

Completion day is when you transfer the remainder of the money and pick up the keys to your new property. Try not to make it the same day as when you exchange. A little breathing space is advisable.

It’s all yours. Now the fun begins: transferring the utilities, registering for council tax, redirecting your mail, changing your address…

Who will walk Meghan down the aisle now?